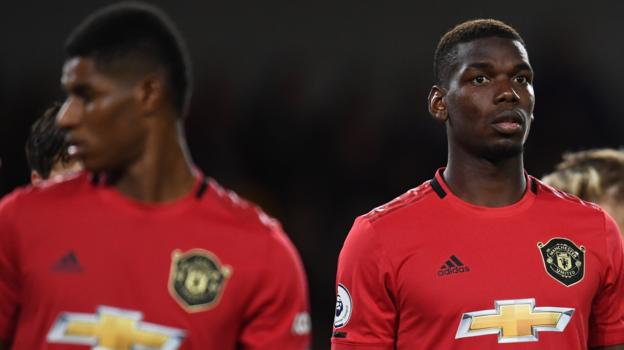 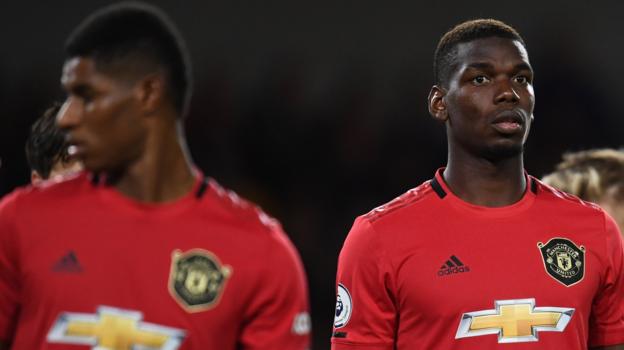 “Weak management” and “this isn’t tombola” was just some of the negative reaction to Ole Gunnar Solskjaer’s selection of two penalty-takers, as Paul Pogba missed a spot-kick for Manchester United in their Premier League draw at Wolves.

It was 1-1 with just over 20 minutes of the match remaining when the visitors were awarded a spot-kick after Conor Coady tripped Pogba in the area.

Marcus Rashford took United’s penalty last week in the 4-0 win over Chelsea, but after a discussion with his team-mate it was decided that Pogba would assume responsibility. The Frenchman struck the ball well, but Rui Patricio blocked his effort.

“The two of them are designated penalty takers, it’s up to them there and then,” said Solskjaer after the game.

‘This is not under-fives football on the playground’

Chris Sutton, the former Norwich, Celtic and Chelsea striker, watched the game at Molineux as an analyst for BBC Radio 5 Live.

He said: “It is the job of the manager to designate. That is a huge moment. United could have won the game.

“You can’t say, ‘I’ll leave it down to the players’. I like Ole but that’s weak management.

“Rashford may have missed as well, but we’d have understood because he took the last one. He shouldn’t be allowed to make that decision himself. It wouldn’t be allowed under someone like former manager Sir Alex Ferguson.”

Former United right-back Gary Neville said it was “embarrassing” United did not have one designated taker.

“Why is there a debate on who takes the penalty? I don’t like it,” he told Sky Sports.

“There should never be a debate. Pogba has missed four in the league since the start of last season. You’d think he has had his chance. Rashford scored last week – take the penalty. But there wasn’t a leader out there. Something wasn’t right. They couldn’t make a decision between them.

“This is a Manchester United penalty – this isn’t a tombola. This is not under-fives football on the playground.”

‘Paul has scored so many for us’

Solksjaer defended his tactics, stating that Pogba was “confident”.

He told Sky Sports: “The two of them are designated penalty takers, it’s up to them there and then.

“Sometimes players just feel they are confident to score. Paul has scored so many for us and today it was a good save. You can see the slides on the PowerPoint [to prove they were both designated penalty takers].

“The two of them have been confident before. Marcus scored last week but Paul was also confident. I like players with confidence.”

The 21-year-old England striker said he had no issues with Pogba deciding to take responsibility.

“Paul wanted to take it, it’s that simple,” the 21-year-old England striker said. “Anyone can miss a penalty, he has scored so many penalties and it is normal to miss one.

“It is simple, if you want to take it, you take it. I took one last week so for me it’s no problem that he took it.

“It’s unfortunate he didn’t score but that’s football. The confidence that you’re going to score is always the same. We practise all week and we score the majority of them.”

‘Ridiculous decision’ – ex-pros give their views

Your reaction via #bbcfootball

S: So it seems like if Pogba wants the penalty, he takes it. What does that say about last week? Big game, season opener, capacity crowd, chance to make a statement after summer of speculation… did he just not fancy it?

Pinda Mann: Love Ole and always will regardless of how it goes as manager but he’s got to decide on the penalty-taker. If there are two then it should be decided who is first one and who is second, doesn’t make sense.

‘To outsiders, it smacks of a lack of leadership’ – analysis

The sight of Pogba pulling his shirt over his head at the final whistle, just before Rashford was handing his to a Manchester United fan, was somehow poignant.

The Norwegian twice said he had “absolutely no problem” with players deciding on the hoof.

What he didn’t say was what happens when both players want to take it? What happens next time if Rashford – who has never missed – wants to take it but Pogba – four failures in a year – pulls rank.

Solskjaer may think he is letting his players sort problems out for themselves. To outsiders, it smacks of a lack of leadership, a situation made worse by the fact his captain is in goal.

Lack of on-pitch leaders was one of the reasons why Solskjaer was so keen to sign defender Harry Maguire. It is a shame Maguire was less than two games into his United career when Monday’s mess unfolded.