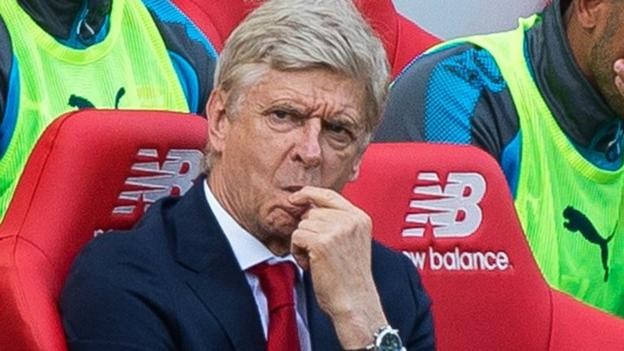 Arsenal boss Arsene Wenger has called on supporters to stick by his team after describing the 4-0 loss to Liverpool as “absolutely disastrous”.

The Gunners failed to register a shot on target in a lacklustre display that drew criticism from fans and pundits.

“But we want our fans to be with us even in a losing performance like that.”

He added: “The only thing we can do is come back and give them a better performance.”

Wenger signed a new two-year deal at the end of last season, despite calls from some supporters for him to be replaced.

The club finished fifth in the league, meaning they missed out on Champions League football for the first time in Wenger’s 21-year tenure, but won the FA Cup.

Wenger left club record signing Alexandre Lacazette on the bench at Anfield, but was able to give forward Alexis Sanchez a first start of the season.

However, the Gunners were overrun by goals from Roberto Firmino, Sadio Mane, Mohamed Salah and Daniel Sturridge and when asked what was wrong with the performance, Wenger said “everything”.

“We were not at the right level from the first minute – physically, technically and mentally – and we were punished,” said the Frenchman.

“Today our performance was not acceptable. It is true today we were an easy opponent for Liverpool.

“Our performance was absolutely disastrous. Not to become too emotional, we have to take some distance, and there are some reasons behind it, and the players now go on their international break, but we do have to take the consequences of our performance today,”

Analysis – ‘The club needs freshening up’

Liverpool haven’t beaten Arsenal, they have destroyed them. Thumped them. Torn them apart.

It doesn’t matter what formation you play or your tactics, it’s also about desire and winning second balls. I don’t think enough Arsenal players want to play that kind of football.

Where are the leaders on the park for Arsenal, getting the likes of Granit Xhaka and Nacho Monreal by the scruff of the neck and demanding to know what they are doing?

If I was an Arsenal fan I’d want to see my manager. Arsene Wenger and Steve Bould are simply sitting there doing nothing. Get out there and give your team a rollocking.

Talk about body language. Think of the Arsenal teams of the past – leaders like Tony Adams, Martin Keown and Bould.

Blame Arsene Wenger all you want but if the Arsenal players cannot muster up some fight then there must be something seriously wrong at the football club.

I would have liked to have seen Wenger leave at the end of last season after winning three FA Cups in four years. He’d have left with the respect of the crowd and with his head held high.

The club needs freshening up.