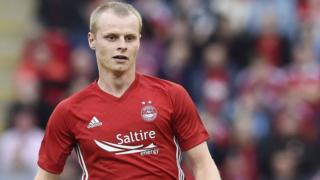 An Aberdeen footballer has been rescued from a river after a night out in Glasgow.

Gary Mackay-Steven, 26, was suffering from the effects of hypothermia when he was pulled from the River Kelvin by firefighters early on Sunday morning.

The former Celtic winger was then taken to the Queen Elizabeth University Hospital by paramedics.

The incident happened near the Benalder bridge in the west end of the city at about 02:30 BST.

A spokesman for the Scottish Fire and Rescue Service said specialist crews were involved in the rescue.

He said: “Four appliances attended and specialist water rescue crews safely assisted the individual out of the water – he was then transferred into the care of paramedics after suffering the effects of hypothermia.

“Firefighters ensured the area was safe before leaving the scene.”

Police Scotland confirmed the rescued man was taken to the Queen Elizabeth University Hospital for treatment.

Mackay-Steven joined the Dons from Celtic in July.

He played for Ross County, Liverpool and Fulham as a youth but made his senior debut for Airdrie United, before moving to Dundee United.

The winger scored his first goal for Aberdeen in July, during a 2-0 win over Bosnian team Siroki Brijeg in the Europa League qualifiers.

He has made two appearances for the club in the Scottish Premiership this season but he was on the bench on Saturday for the clash with Partick Thistle.