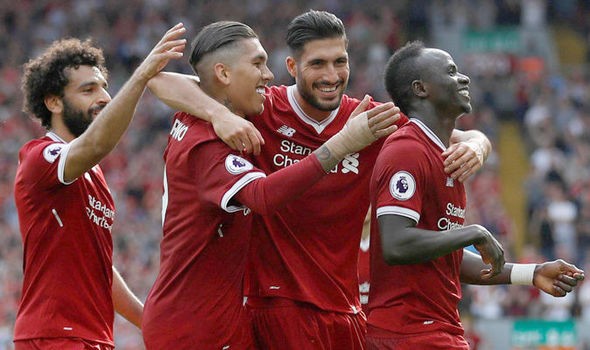 Liverpool produced a dazzling attacking display to destroy Arsenal as Arsene Wenger’s side were humiliated at Anfield.

Wenger surprisingly chose to leave out summer signing Alexandre Lacazette, and the £52.6m striker could only look on as every one of the Gunners’ old, familiar failings were brutally exposed by Liverpool’s pace, movement and sheer desire.

Roberto Firmino headed in Joe Gomez’s cross to give Liverpool a 17th-minute lead to start an attacking blitz that ended in a final scoreline that actually flattered Arsenal.

Sadio Mane curled in Liverpool’s second before Mohamed Salah ran half the length of the field on the break to stroke home the third after 57 minutes. The fact that the goal came from an Arsenal corner merely emphasised the shambolic nature of their display, which lacked organisation, commitment and passion.

Arsenal were overrun and showed no stomach for the fight. Liverpool substitute Daniel Sturridge gave the scoreline a more realistic appearance when he headed home the fourth at the far post from Salah’s cross 13 minutes from the end.

Liverpool struggled to find the fire and verve that almost took them to the Premier League title in 2014 after their inspiration and talisman Luis Suarez left for Barcelona.

The fear factor Suarez possessed disappeared and in many respects it signalled the beginning of the end for Brendan Rodgers as Liverpool manager.

Could it be that Mane has provided that crucial missing link in a Liverpool attack that now carries enough pace and movement to trouble any defence in the game?

The 25-year-old Senegal striker had a fine first season at Anfield following his £34m move from Southampton in summer 2016, although his impact was reduced by injury and absence at the Africa Cup Of Nations, which hurt Liverpool’s season.

This season, in combination with Firmino and new boy Salah, he is moving into the highest class and performing in a manner that is drawing comparison with Suarez.

Mane’s goal was a typical piece of work, cutting inside from the left before placing a perfect right-foot shot low past Petr Cech.

He possesses the ‘X Factor’ of unpredictability without Suarez’s unpalatable excesses, as well as lightning pace and tactical discipline. Mane will be crucial to Liverpool’s season.

Mane may not yet be in the exalted class of Suarez when he was at Liverpool – but he is certainly looking like the closest they have had since the departure of the brilliant but temperamental Uruguayan.

Why would Sanchez stay at Arsenal?

Wenger insists Alexis Sanchez, who made his first appearance of the season, will not be sold before Thursday’s transfer deadline – but that is unlikely to stop Manchester City making one final attempt to prise the Chilean away from Emirates Stadium.

Sanchez has shown no inclination to sign a new contract at Arsenal so Wenger’s decision means the Gunners now risk losing an asset worth at least £50m for nothing at the end of this season.

The brutal question after Arsenal’s ambitions were laid bare once more is: what is there on offer in terms of serious success that would keep him at Arsenal?

Liverpool looked light years ahead of Arsenal as potential title contenders, and with no Champions League football, there was very little that was appetising enough to tempt Sanchez to stay.

Sanchez was even denied the assistance of Lacazette, who was reduced to the role of substitute while Arsenal were subjected to the sort of hammering they have received at Anfield on a couple of occasions in recent seasons.

It is now a question of whether Arsenal stick or twist in the next few days – and whether a huge offer from City might just be tempting.

In a further irony, Alex Oxlade-Chamberlain, who looks certain to leave Arsenal before the transfer deadline, was warmly applauded by Liverpool’s fans when he was substituted, clearly in the hope he could be tempted to Anfield rather than Chelsea.

Liverpool manager Jurgen Klopp and Arsenal counterpart Wenger both made big selection decisions before kick-off for one of the big early-season games.

Klopp decided to “rest” goalkeeper Simon Mignolet – although no-one was quite sure what he was being rested for – and replaced him with young German Loris Karius, while Wenger produced an equally big surprise by leaving out Lacazette.

Liverpool’s only anxious moments came via Karius’ uncertainty with the ball at his feet, the keeper twice almost caught in possession by Danny Welbeck but getting lucky as the ball bounced to safety.

Arsenal were so abject in attack that he was not tested in any other way – although the buzz of anxiety that whipped around Anfield when he had the ball at his feet sounded a note of concern for Klopp.

Lacazette – who came on for the final 28 minutes – was probably best being kept out of this one, as Arsenal were swept aside by a red tidal wave of attacks. But it is a mystery why Wenger would spend big money on a player then leave him out for such a vital game.

Arsenal’s other summer signing, defender Sead Kolasinac, the man who was supposedly going to beef up a soft side, was also excluded on a chastening day that left Wenger facing familiar and painful questions.

Liverpool haven’t beaten Arsenal, they have destroyed them. Thumped them. Torn them apart.

It doesn’t matter what formation you play or your tactics, it’s also about desire and winning second balls. I don’t think enough Arsenal players want to play that kind of football.

Where are the leaders on the park for Arsenal, getting the likes of Xhaka and Monreal by the scruff of the neck and demanding to know what they are doing?

If I was an Arsenal fan I’d want to see my manager. Arsene Wenger and Steve Bould are simply sitting there doing nothing. Get out there and give your team a rollocking.

Talk about body language. Think of the Arsenal teams of the past – leaders like Adams, Keown and Bould.

That was one of Liverpool’s very best performances in a number of years. The midfield controlled the game with the pace and power of Wijnaldum, Can and Henderson combined with the pace of the attacking threat of Salah, Firmino and Mane.

It was almost perfect as a performance and it could easily have been more.

Liverpool won every battle today for the entire game. If you get the better of your opposing man, then usually the team will win. I cannot think of any area where Liverpool lost out.

Blame Arsene Wenger all you want but if the Arsenal players cannot muster up some fight then there must be something seriously wrong at the football club.

I would have liked to have seen Wenger leave at the end of last season after winning three FA Cups in four years. He’d have left with the respect of the crowd and with his head held high.

The club needs freshening up.

Reaction – ‘Simon is the number one’

Liverpool manager Jurgen Klopp told BBC Sport: “After midweek games you have to reach the mountain immediately. You really feel it is intense, we wanted to force ourselves to be strong physically and that is what we were. We were really well organised.

“If you give Arsenal space and time you lose before the game starts so I don’t think they could do a lot of what they wanted, Arsenal, and that is all credit to the boys because they worked really hard.”

On the decision to rest Simon Mignolet: “It is a completely normal decision. We want to have three strong goalkeepers. Simon is always spot on, always really good, a smart guy, he is a machine, he is the number one.

“But when you have three you have to give Simon a rest. He was not overly happy. He did not ask for the rest, but it is a mental rest more than a physical rest.”

Arsenal manager Arsene Wenger, speaking to BBC Sport: “We put [the players] in ideal conditions, I think overall the performance from back to forward was not at the level requested and it raises many questions.

“I still believe you have to think these players are good enough but it is sure that today we were not at the level.”

Both clubs have almost a two-week break because of the upcoming international fixtures, with their next games coming after the transfer deadline.

The stats you need to know – more Gunners woe at Anfield