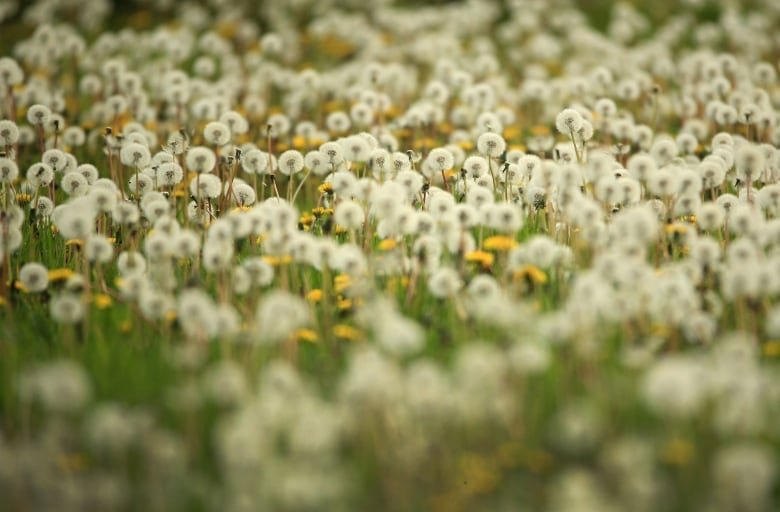 It’s time for a frank discussion about weeds

It’s that time of year when people get down and dirty in their yards, and that inevitably means contending with weeds. But there is a growing awareness that these sometimes prickly, sometimes unsightly plants may actually do more good than harm. Andre Mayer spoke to Dan Kraus, national conservation biologist at the Nature Conservancy of Canada, about weeds’ bad reputation and their proven ecological benefits.

“Weed” has a negative connotation. What does the word even mean?

Weed is a very subjective term. There is no scientific definition that says: this is a weed, this is not a weed. They’re basically plants that are in a place where people don’t want them. People consider dandelions to be a weed, but if you just change your mind about dandelions, and you don’t mind them on your lawn, then they’re no longer a weed.

Certainly, scientists will sometimes talk about weedy species, which tend to be plants that reproduce very quickly and tend to produce a lot of seed, or they can spread by underground roots. Some people consider weeds to be things that are non-native, but that’s not always the case.

Is our conception of weeds influenced by our love of lawns?

The whole idea of the perfect, monocultured, uniform lawn is manufactured. It’s like the fashion industry. That thought has been put into our mind. But when you look at other things, like art, nobody likes just a blank painting with nothing on it. If you find a natural forest with wildflowers, it’s much more interesting than a monoculture of planted pine trees in rows. As humans, we are attracted to diversity, but for some reason that hasn’t been applied to our lawns – but I think it is changing. It’s important that it changes, because in most urban areas, lawns [collectively] are the largest area of green space, and how we manage those ecosystems can have an impact on urban biodiversity.

What are the most common weeds?

It varies a lot across regions. In terms of people’s lawns, the dandelion is the classic one. I would not consider the dandelion to be highly invasive. If you go into a natural area, you might find a few dandelions along a trail, but they’re not like garlic mustard or dog-strangling vine, which are rampantly moving through natural areas. [Dandelions] are a plant that’s non-native, that probably adds to the diversity of our lawns and really does no harm.

Historically, some of these plants had some kind of human connection – some medicinal use or food use, and that’s why we brought them over [from another country].

Which are the most beneficial weeds to animals?

Anything that flowers provides the greatest benefit for pollinators and will attract birds, which will include non-native plants like dandelions, but it’s also not uncommon to find things like wild strawberries or native violets in our lawns.

What advice do you have for people about being responsible about weeds?

The rule on our lawn is if it hurts to step on it with bare feet, it goes. We don’t allow things like thistle, which if kids step on it, it hurts. Everything else is fair game.

Learn what the plants are. There are great apps that you can get on your phone now. I use one called iNaturalist — you can take a picture and very quickly find out what that plant is. Sometimes just knowing the story of the plant and where it’s from, if it’s native, is going to help you to appreciate it a little more.

The main thing is that we need to change our esthetic of lawns, see it less as a crop that we’re supposed to see as a monoculture and more of a mini-ecosystem and you’re the keeper, the steward of that ecosystem. The more diverse that ecosystem is, the better it’s going to be for wildlife, and the more rainwater it’s likely to absorb and put into the ground, as opposed to rushing off your lawn and into storm sewers.

This interview has been edited and condensed.

“Here on Quadra Island, B.C., there has been an amazing spring for blossoms both from cultivated plants and wild ones. I have lived here for almost 22 years and never have I seen such a large number of wild bees of so many different types.  The garden hums from dawn to dusk. It started a bit late as we had some cool nights, but when they did appear, the heather … varieties were their first choice. Encouraging wilder lawns is positive but select planting of flowering plants, particularly in the spring, and no spraying of pesticides or herbicides is also important.”

In this time of physical distancing, one unexpected quandary for many urban dwellers has been finding a place to stretch their legs. As people seek respite from their homes, sidewalks and parks have begun to feel rather crowded. This has led some wellness experts to tout the benefits of “forest bathing.” The idea originated in the 1980s in Japan (where it is known as shinrin yoku), and it’s basically a form of nature therapy — the idea is to leave your worries behind by absorbing the sights, smells and sounds of a walk in the woods. If you seek the calming influence of nature but cannot manage to get yourself into a wooded area, one option is to book a guided virtual tour through the California-based organization Forest Bathing International. Here, tour guides will take you through picturesque forests in places like Hawaii, New Zealand and Banff, Alta.

Carbon emissions have been down, but that probably won’t last

If you’re looking for a silver lining to the coronavirus pandemic, our reduced carbon footprint isn’t it.

A recent climate change study in the journal Nature cited a 17 per cent drop in daily CO2 emissions compared to this time last year, but experts caution against inflating the significance of a few months of reduced human activity, at least when it comes to climate change.

“Think about it this way,” said renowned Canadian climate scientist Katharine Hayhoe. “We’ve been putting a brick on a pile every month since the beginning of the Industrial Revolution. Last month, we put a 20 per cent smaller-sized brick on that pile that has thousands of bricks already on it. That one slightly smaller brick is not going to make a big difference.”

The metaphorical brick Hayhoe uses to represent CO2 emissions is expected to be four to seven per cent smaller this year than in 2019, which would mean emissions for 2020 will be roughly the same as in 2011, said Corinne Le Quéré, one of the authors of the Nature study.

After all the cancelled vacations, eliminated work commutes and restricted social activity, how is that possible?

The pandemic has led to a temporary drop in emissions related to things like personal transportation but other carbon-intensive practices continue, from electricity generation to manufacturing.

If the scenario of a seven per cent annual reduction in CO2 emissions were repeated year over year for a decade, it would put the world on track for keeping warming below the Paris Agreement’s most ambitious target of 1.5 degrees C. But experts say that’s not the trajectory they expect post-pandemic, as the economy and society reopen.

“As the pandemic passes, we are likely to see those [emissions] ratchet right back up again,” said Hayhoe. “Why? Because they weren’t obtained through sustainable methods. She said, “we can’t just shut down the economy, throw people out of work, have everybody stay in their homes.”

Inger Andersen, executive director of the United Nations Environment Program, echoed this point. To make lasting emissions reductions, “we’ll need to see systemic shifts in our energy [use] … and that is not by locking humanity indoors.”

Economist and veteran climate policy adviser Mark Jaccard told CBC Radio’s The Current “the transition of an economy away from reliance on burning coal and burning gasoline in our vehicles requires a transition of our equipment and our factories, and that can only be a longer-term prospect.”

History shows that economic recoveries are often accompanied by emissions growth — for example, the financial crisis of 2008 was followed by a steep increase in emissions by 2010.

Since then, however, there has been greater awareness of climate change as a threat, thanks in part to the 2018 IPCC report that warned the world had 12 years to limit climate catastrophe, as well as an increase in activism.

There are already signs that this time could be different. For example, countries like Germany and France are working on economic recovery packages that will help shift to the low-carbon economy the European Union was pursuing before the pandemic.

Here in Canada, some of the government’s stimulus money is also coming with green strings attached, such as regulations on methane emissions. “Just because we’re in a health crisis doesn’t mean we can neglect the environmental crisis,” Prime Minister Justin Trudeau told reporters April 17.

While reining in carbon emissions remains an ongoing task, Hayhoe hopes people take an environmental lesson from the pandemic lockdowns: “What this has shown us is that it is possible to achieve these reductions.”