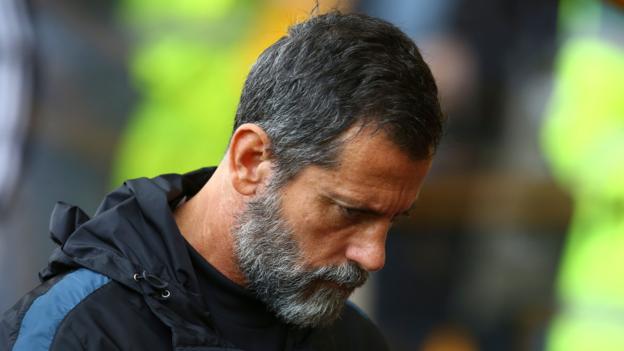 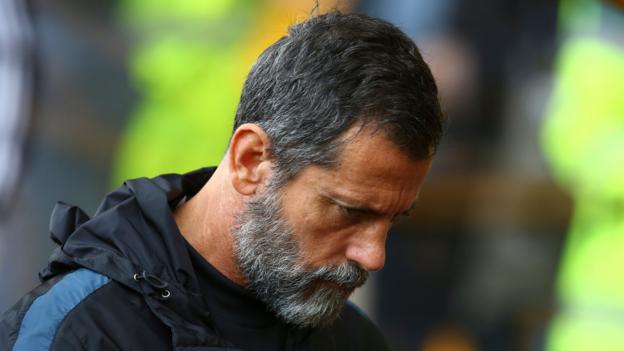 Quique Sanchez Flores is not a man who overreacts to tough situations.

Instead of an in-depth analysis of what went wrong in the 8-0 defeat at Manchester City on 21 September, the Watford coach skimmed through the wreckage in about two minutes.

He knew lessons must be learned from the Etihad Stadium debacle – but felt forcing his players to sit through their embarrassment would be counter-productive.

Yet, three weeks into his second stint at Vicarage Road, there are worrying signs for what lies ahead.

Saturday’s 2-0 defeat at Wolves means Watford have now gone 11 matches since their last Premier League win. The last time they went on a run like that was the 1999-2000 season, when they got relegated.

Flores called Watford’s current situation “a mess” after the Molineux defeat. Is the 54-year-old going to be able to sort it out?

Flores’ impact on the well-manicured pitches at Watford’s London Colney training base has been positive.

It is accepted by the majority, inside and outside the club, that former boss Javi Gracia had to be replaced. Flores’ appointment was a surprise, given he left the club by mutual consent in 2016 when a break clause halfway through a two-year deal was activated.

On paper, he does seem to be what Watford need.

“Positive, organised, determined, relentless,” said someone who knows Flores well when asked for his key attributes.

Training sessions are detailed. Planning is meticulous. It might not seem like it from results in his first three weeks but defensive solidity is a key component of his managerial strategy.

The problem is Watford have conceded 12 goals in three Premier League games since he returned. Their only point came from a dramatic comeback in the 2-2 draw against Arsenal.

“We need to score two or three goals to win a match,” admitted Flores after Saturday’s game.

“The aim of this team should be clean sheets and defend the spaces. Right now we are in the middle and the insecurities make us weaker. I don’t like this feeling.”

Against Wolves, Watford had 61% possession.

“This is not the team we are looking for. I want less possession and for us to be more compact and have more pressure. At the moment, we are not a compact team. We are stronger on the training ground than we are in matches.”

Concerning for the fans

The Watford fans are backing Flores. But, deep down, they are worried about what lies ahead.

This is the club’s fifth consecutive top-flight season. The only time they have done better than that was in the halcyon days under Graham Taylor, when they lasted for six before they were relegated in 1988.

Today’s game – and next week’s encounter with Sheffield United at Vicarage Road – were viewed as crucial.

“I still think we can do it because we are quite good going forward. But the defence is an issue,” said Carl Went, who has not missed a game in five years but left the Etihad Stadium early last week as a performance he described as “unacceptable” unfolded.

He added: “The view of Watford from the outside is that just staying up is an achievement. But the owners have ambitions that are higher than that. Going down would be a catastrophe.”

It is true a senior source at the club said in the final third of last season that finishing below halfway would be viewed as a disappointment. Watford ended the campaign in 11th before losing the FA Cup final 6-0 to Manchester City.

The Pozzo family have made 10 managerial appointments since taking over in 2012. Not all the exits have been acrimonious – and not all on their terms – Oscar Garcia resigned because of ill health after only 27 days in charge. But, as Gracia found out, once their minds are made up, they act fast.

This has been viewed as a strength. But nerves in the stands are beginning to show.

“The managers tend to get hung out to dry,” said Went. “He is the one who has to deal with the players he is given but if it goes wrong, it all falls at his door.”

Watford do not deny this. Neither would it be fair to say Flores is unnerved by what he has discovered in the past three weeks.

But on a day when his team had 14 shots, five of which were on target – more than twice as many as their hosts – yet never really looked like scoring, and conceded goals their manager described as ‘easy’, there are evidently major issues to resolve if Watford are to close a gap to the fourth-bottom spot that has opened to four points as a result of their latest defeat.

“The performance was not good enough,” said Flores. “It is clear we should do better.

“Sometimes the players get confused and don’t understand the orders very well. We are here to support them and I trust the squad a lot.

“But we have insecurities. Easy mistakes are giving opportunities to the opponent. These things happen when you are a little bit down.