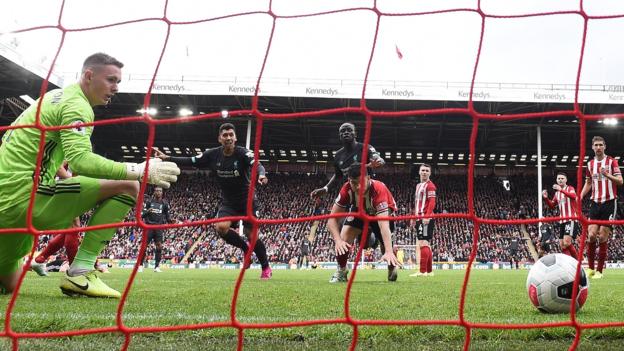 Georginio Wijnaldum scored the only goal as Liverpool continued their perfect start to the Premier League season with victory at a raucous Bramall Lane.

But the winner was a moment to forget for otherwise faultless Blades goalkeeper Dean Henderson, who spilled the Dutchman’s tame effort before it squirmed agonisingly over the line.

It meant relief for Jurgen Klopp’s side, who were far from their best in South Yorkshire – and left thankful that the hosts could not find a way through in a game where they matched the European champions in many respects.

Substitute Leon Clarke, making his Premier League debut at the age of 34, should have levelled it late on, but blazed over.

Liverpool have won their first seven league games of the season, and before Saturday’s 15:00 BST matches, they have an eight-point lead at the top of the early season table.

Klopp’s Reds were rightly expected to win this game – and ultimately did. But when the story of the 2019-20 season is told, this may be looked back on as one of Liverpool’s most crucial but most fortunate victories.

The first half, though goalless, was thrilling. For all of the visitors’ early pressure, it was Chris Wilder’s side who had the first sight of goal when Ollie McBurnie stung the palms of Adrian.

Liverpool’s first clear chance came as a result of a long ball over the top from Virgil van Dijk, but Sadio Mane’s finish when through on goal was wild and wayward, while the Senegal forward later struck the post.

After the break, United may have hit the front, but for alert defending from Joel Matip and Andrew Robertson to frustrate the enthusiastic John Lundstram.

At the other end, when a penalty appeal for Lundstram’s challenge on Mane was denied, it seemed that Liverpool may have to settle for a point.

With time running out, the Merseysiders withdrew Jordan Henderson for Divock Origi, and the move to a 4-2-3-1 formation ultimately paid off with Wijnaldum’s fortunate finish.

Earlier this week, the Champions League winners were told they had failed in their attempt to copyright the word Liverpool. This performance lacked their usual trademarks too.

Indeed, they were lucky not to be punished when Matip and Trent Alexander-Arnold coughed up possession early on.

There’s no questioning the relentless force that is this Liverpool side, but for the second weekend in a row they rode their luck to notch up a league win on the road. But where the Reds were clinical in the 2-1 win at Chelsea, they were wasteful in the Steel City.

Whether it was Mane blazing over or against the post in the first 45 minutes, or Mohamed Salah’s spurned effort one-on-one with Henderson after they had taken the lead, they were not at their flowing best.

However, few if any of their supporters will now lose sleep over the fact Wijnaldum’s goal on 70 minutes was their first shot on target at last season’s Championship runners-up.

They arrived for this match amid news that they could be kicked out of the Carabao Cup for allegedly fielding an ineligible player in the 2-0 win at MK Dons on Wednesday.

As far as their quest for that elusive first Premier League title goes, it remains full steam ahead – although ex-boss Brendan Rodgers and his Leicester City side will provide another stern test in their next league game.

Liverpool resume their Champions League campaign against Austria’s Red Bull Salzburg at Anfield on Wednesday, 2 October (20:00 BST). Klopp’s side then return to league action at home against Leicester City on Saturday, 5 October (15:00 BST).

On the same day, Sheffield United travel to Watford (also 15:00) in the final round of matches before October’s international break.