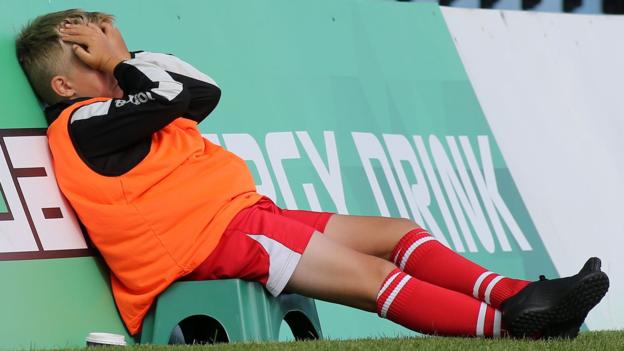 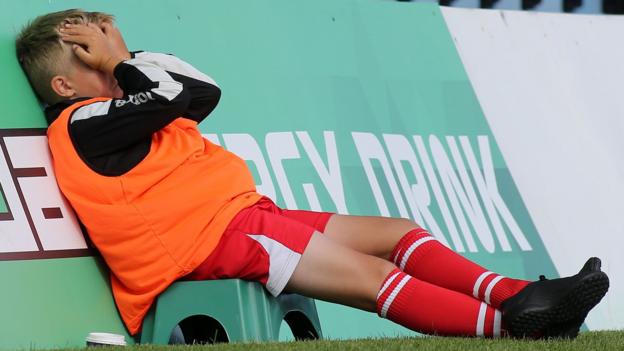 Every football fan has an opposition team they dread coming up against. For Bristol City supporters, that team is probably Preston North End.

The pair had locked horns 12 times in six years prior to this season, with the Robins failing to come out on top even once against the Lilywhites during that time.

And City head coach Lee Johnson will be wondering what exactly his side need to do to beat North End after that record stretched to 13 when they met on Saturday.

The Robins led 2-0 and 3-2 but still couldn’t find a way to win, conceding two penalties and having two goals disallowed before eventually drawing a thrilling Championship contest 3-3.

The mayhem at Deepdale epitomised another topsy turvy day of action outside of the Premier League – and here are five things you might’ve missed.

That’s because referee Aaron Jackson decided the ball boys dotted around the pitch for Yeovil Town’s National League game against Bromley were hindering rather than helping the action on the field.

With the Glovers 3-1 up heading into the closing stages, it wasn’t just the the home players who were engaging in a bit of gamesmanship.

“One ball boy delayed giving the ball back to Bromley’s Sam Wood about 10 minutes from the end and was warned by the referee,” explained BBC Somerset commentator Chris Spittles.

“But when the same ball boy repeated the trick shortly after the referee asked for them all to be removed. One steward was tasked with gathering them all in and leading them away down the tunnel.

Cousins was subsequently rushed to hospital, but was thankfully given the all clear and joined his team-mates for the coach journey home having suffered a slight concussion and ligament damage in his shoulder.

It’s been a tough week for everyone involved at Thomas Cook, after the 178-year-old holiday firm ceased trading on Monday following a failed takeover bid.

The company’s collapse has left 9,000 UK jobs at risk, including workers at its headquarters in Peterborough.

As a “small gesture” to “show our support”, League One side Peterborough United decided to offer employees free tickets for Saturday’s match against AFC Wimbledon.

And promotion-chasing Posh, whose shirts were sponsored by Thomas Cook in the 1990s, were even able to put on a show on the field with a 3-2 victory over the Dons.

Darren Ferguson’s side have now racked up 23 league goals so far this season, making them the top-scorers in the division.

Since his exit from the Riverside in the aftermath of a battling comeback win – coincidentally against Wednesday – in December 2017, he had faced the Teessiders three times with former club Birmingham City, losing on each occasion.

He was quick to credit his players and their execution of the game plan, rather than focus on the personal pleasure of the result.

“The team that can focus and bring the game plan the strongest will win, and we did that perfectly together,” he told BBC Radio Sheffield.

“We showed how devastating we can be. We were ruthless and clinical in the first-half and exceptional.”

Wednesday are now unbeaten in three league games since appointing Monk, with the midweek loss to Everton his only setback so far.

As weeks go, it will be difficult to surpass the past seven days that League One side Oxford United have just enjoyed.

After just two wins from eight games in all competitions leading into last week’s league fixture against Lincoln City, Karl Robinson’s side are reinvigorated.

Having won 6-0 against the Imps last Saturday, they went on to demolish Premier League side West Ham 4-0 in the Carabao Cup in midweek.

Buoyed by that win, they went on to score three goals without reply against Gillingham on Saturday, and clinch their fifth clean sheet in a row.

“It’s a true pleasure to watch this team at the moment,” Robinson said following the victory.

“The players certainly put on a great show again. We’re scoring goals at will.”

Speaking of Gillingham, an injury to reserve goalkeeper Joe Walsh just before kick-off meant that 48-year-old Simon Royce was named on the bench.

Kevin Ellison and Dannie Bulman, both 40, had contrasting days in League Two for Morecambe and Crawley Town respectively.

Ellison bagged bagged a dramatic late equaliser for the Shrimps against Northampton Town, while Bulman was on the losing side as his Crawley team were defeated 3-2 by Walsall.

Meanwhile, after 16-year-old Luke Matheson’s heroics for Rochdale in their EFL Cup defeat by Manchester United in midweek, 39-year-old Aaron Wilbraham made his first start since April as Dale lost to in-form Wycombe at home.