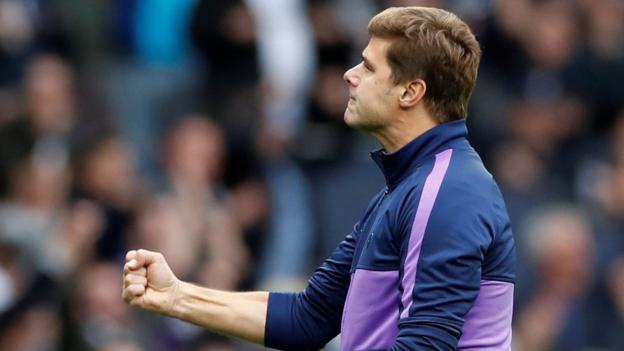 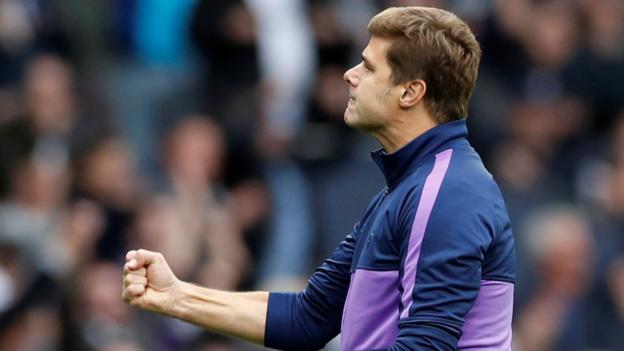 Having endured one of the most embarrassing results of his managerial career, Mauricio Pochettino ended a testing week with a smile and three points against his former club Southampton.

“A few months ago we played in the Champions League final, not because of luck, it was because we fully deserved to be there. We cannot have changed too much in a few months,” said the Argentine after goals by club record signing Tanguy Ndombele and Harry Kane inspired Spurs to a 2-1 win against Southampton – despite playing with 10 men for about an hour.

The result went some way to dispersing storm clouds that had been gathering following back-to-back defeats – including a disastrous midweek Carabao Cup exit at League Two Colchester.

After an unconvincing start to the Premier League campaign, Spurs remain 10 points behind leaders Liverpool, but this result and spirited performance will bring Pochettino and his players some much needed relief after winning just two of their previous nine top-flight matches – a run stretching back to last season.

Their slow start meant they began the day closer to the bottom three than the top two.

However, it will take more than a narrow win over Southampton to convince critics they are completely over their troubles – particularly after Serge Aurier’s needless red card and a goalkeeping blunder by skipper Hugo Lloris.

At the final whistle, Pochettino joined his players on the pitch applauding fans who bellowed out Lloris’ name following a game which brought out the worst – and the very best – from the France keeper.

The Spurs boss looked as relaxed as he has been for a long time as relief cascaded from the stands after a return to winning ways.

But despite the three points, four months on from the Champions League final something is still not quite right at Spurs this season.

Alan Shearer labelled Spurs “soft” after throwing away leads three times this season, while the former England captain questioned whether Pochettino’s side had the mentality to reach the next level and mount a serious title challenge.

Having finished 27 points behind champions Manchester City last season, they had already dropped 10 points before Southampton’s visit – despite leading for 213 minutes out of 540 in the Premier League before Saturday.

Against Saints, they again threatened to unravel before coming good. After Ndombele’s ferocious finish, Ivory Coast defender Aurier was dismissed before Lloris gifted Southampton an equaliser.

Pochettino, however, only wanted to focus on the positives after the game.

“I feel proud,” he added. “I am happy, so happy because of the players, because of the fans and the staff, because they deserve to be in a different situation to the one we’ve been living in during the past few weeks.”

There is much to admire about Tottenham. Their state-of-the-art new stadium is breathtaking, they boast one of the best training facilities in the country, and Pochettino remains one of the most coveted managers in the world – even though #PochOut was trending on Twitter on Tuesday, four months after the Argentine led Spurs out at the Champions League final.

“If he turned around tomorrow and said I’ve had enough of this, I’m pretty sure Real Madrid and Manchester United would be on the phone,” former Spurs midfielder Jermaine Jenas told BBC Radio 5 Live.

“He’d probably double his wages and get a massive transfer kitty.

“There’s a reason why he wants to stay at Tottenham. He genuinely loves this project but he’s not been backed, I don’t think, in the way he thought he was going to be backed at the start of the season.”

The 2-0 defeat by Liverpool in Madrid on 1 June – and failure to land a first trophy in his five years at Tottenham – has clearly been playing on Pochettino’s mind. On the eve of Southampton’s visit, he said he is still “suffering” from that result, which had left him feeling “depressed”.

Saints boss Ralph Hasenhuttl warned pre-match Spurs would be like a wounded boxer and that he expected them to come out swinging – and they did just that with a performance oozing in character that showed the kind of determination that won them so many plaudits in Europe last season.

Issues remain – not least the failure to find an experienced replacement for Kieran Trippier after the right-back moved to Atletico Madrid this summer.

Then there’s Dele Alli’s dip in form – he has still only played half an hour in the league this season after another afternoon spent as an unused substitute – while full-back Danny Rose remains despite being left off the pre-season tour to Asia in order to find another club.

Although Christian Eriksen played well against Southampton, speculation over the Denmark midfielder’s future remains, and what of Eric Dier? Two seasons ago he made 47 first-team appearances, yet the England player has dropped off the radar.

Tottenham averaged an eye-catching 2.24 points per game during the 2018 calendar year.

The visit of Southampton was their 25th league match of 2019, and their 11th win, giving them an average of 1.48 points per game – still a significant drop on the previous year.

Their lack of wins away from home have been well documented and, despite this victory, they trail Crystal Palace in terms of points won in 2019.

Despite spending about £90m on new players in the summer – including £53.8m on France midfielder Ndombele – nine of Tottenham’s starting XI against Southampton on 8 May 2016 remain at the club.

“There are issues at Tottenham – you cannot hide that,” added Jenas.

“This was the summer in Pochettino’s mind where he thought ‘right, I have taken this group of players so far and for us to kick on we need a clear out of four or five. We need to start blooding some of the youth players and also adding four or five top players to freshen up the squad’.

“He has the same ambitions as the fans have. He wants to win things at Tottenham. If he walks away from it, what’s his legacy?”

The next few games will be telling. It is 36 years since Tottenham last played Bayern Munich in a competitive fixture. The champions of Germany visit on Tuesday in the Champions League – a match Pochettino will want three points from after his side threw away a 2-0 lead to draw 2-2 away to Olympiakos in their opening Group B game.

That marks the first of five games for Pochettino’s side in October.

They face a formidable test at leaders Liverpool at the end of the month, while an away game at Brighton on 5 October offers a chance to record back-to-back Premier League wins for the first time since April.

Pochettino has not been helped by injuries which have affected all three of his summer signings.

While Ndombele is back playing again – and scoring – after a thigh problem, attacking midfielder Giovani lo Celso has been limited to three substitute appearances by a hip injury, while England Under-21 left-back Ryan Sessegnon, 19, has yet to play for his club because of a hamstring problem.

“When good people suffer – people like my squad, the club, the fans – it is a thing to be concerned about,” added Pochettino. “You can only work hard to be more consistent and provide happiness to our family.”