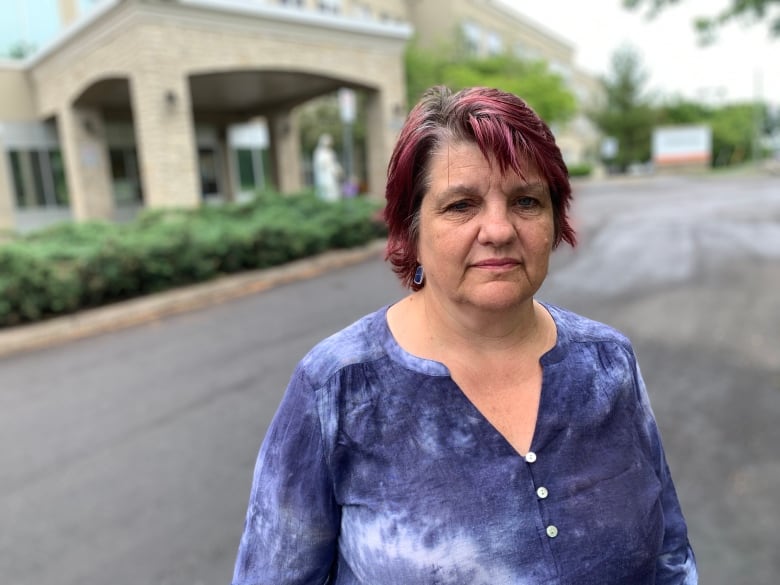 A camera installed by a woman concerned about her mother’s health inside an Ottawa long-term care home overwhelmed by COVID-19 shows several residents wandering into a private room at the height of the outbreak.

The footage shared with The Fifth Estate shows lapses in infection control and provides a glimpse into how Madonna Care Community, one of the hardest-hit nursing homes in Ontario, responded to the crisis.

Madonna Care has one of the highest coronavirus infection rates in the capital. Ninety-seven of the home’s 160 residents contracted COVID-19. Nearly half of them died.

Stephanie Kocielski installed a camera in the room of Beverly Peterson, her 73-year old mother, one day before the province banned non-essential visitors to long-term care and retirement homes. Madonna’s management knew about the camera.

“It’s horrible. Horrible,” said Kocielski, who is angry at what she saw. “My mom has dementia, and she can’t speak for herself and she has a hearing problem.… I want to be her voice.”

A COVID-19 outbreak was declared at Madonna Care on April 6.

The camera in Kocielski’s mother’s room sits on top of a corner shelf and flickers to life when there is movement in the room.

Video reviewed by The Fifth Estate from April 23 shows four residents wandering into Peterson’s private room that afternoon, before she tested positive for COVID-19. In most of the cases, Peterson was not in the room.

At the time, Madonna Care had more than 30 cases of COVID-19 among residents. Three people had died and four staff members had tested positive.

At 2:21 p.m. on April 23, an elderly man walks into Peterson’s room, drawn to the plush blanket tucked into her bed. It has a picture of a horse on it. The man pulls the blanket off, climbs into the bed and snuggles into it. Then he coughs on the blanket before falling asleep. Fifteen minutes later, staff find the man, rouse him and take him out of the room.

Two hours later, a woman walks in and rearranges the knick-knacks on Peterson’s nightstand then leaves. Five minutes after that, another female resident, using a walker, ambles across the room to stare out the window.

Shortly before 6 p.m., another man wanders in and sits down on the bed for several minutes. Peterson doesn’t know he’s there because her back is turned to him.

“There was a man in my mom’s bed coughing on her pillows and blankets and her bedding didn’t get changed,” said Kocieslki, who watched it all unfold from her cellphone. “I thought, ‘Oh my gosh, she’s going to get sick for sure.’ ”

On April 26, three days after residents wandered into her room, Peterson tested positive for COVID-19.

In an email to The Fifth Estate, Sienna Living, the company that owns Madonna Care, said that “as soon as any resident displays any kind of respiratory flu-like symptoms, they are placed in isolation and are closely monitored by our team as required by our infection and control protocols.”

Sienna Living’s response did not specifically address the issue of wandering residents. The corporation also declined a request for an interview.

The company, which owns 70 seniors homes in Canada, said it has followed all public health directives with regards to testing.

“The safety of our residents and team members is our No. 1 prioirty. Throughout the pandemic, we have worked closely with public health authorities and the government to implement all necessary precautions, protocols and directives to protect our team members and residents,” the company statement read.

Sienna also said that bed linens are changed, with baths at least once per week, and anything “visibly soiled is changed regardless of frequency.”

But that is not what Kocielski’s recordings appear to show.

Additional footage reviewed by The Fifth Estate shows several residents continuing to wander into Peterson’s room and sleep on her bed while she was still positive for the coronavirus.

WATCH | Residents continue to wander into the room of a woman who has tested postive for the coronavirus:

After Beverly Peterson tests positive for COVID-19, residents at Madonna Care Community continue to wander into her room. 0:10

This happened despite a memorandum issued by the Ministry of Long-Term Care in early March that stated residents with respiratory illness or fever should be isolated.

Kocielski also said she called Madonna Care and demanded the sheets be changed when she first saw the man napping on her mother’s bed. She said the footage appears to show that the horse blanket and pink pillow case were not stripped until three weeks later, on May 12.

Kocielski said staff only changed her mother’s sheets twice in more than 90 days.

“We noticed right from the beginning they seem to be short-staffed. The PSWs and nurses seemed to be run ragged,” said Kocielski. She noticed that workers spent very little time in the room, and that there were times when no one checked on her mother overnight.

On April 26, paramedics tested all residents and staff of the home. The surveillance testing revealed the virus was rapidly spreading. Sixty-one residents were infected, along with 27 employees. The number of staff infections was seven times higher than the previous week. By the end of the month, the death toll at Madonna Care had climbed to 15.

Kocielski has recorded hundreds of hours of video over more than three months. The Fifth Estate has seen samples from several weeks in March, April, May and June.

Other footage seen by CBC shows instances of staff wearing only a surgical mask when standing close to her mother. In one case, a worker is seen touching her mother without gloves. Care staff are only seen wearing full PPE, (masks, shields, gloves and gowns) after Peterson tests positive.

Kocieslki’s mother has recovered from her illness, but Kocieslki said she’s not confident Madonna Care will be able to handle the next wave of the pandemic on its own.

“I want people to beware. I want people to help make change. I think the government needs to take over the long-term care homes,” she said. “What went wrong in all these homes that were for-profit?”

On April 29, the Champlain Health Region Incident Command sent in a COVID-19 SWAT team to Madonna Care Community and other hard-hit seniors home.

In an email, CHEO spokesperson Paddy Moore said that hospital workers brought in their own PPE such as N95 masks, surgical masks, gowns and gloves “to ensure adequate supplies” and worked with Madonna’s management to stabilize the home’s own PPE supply.

Even with the arrival of the health SWAT teams, the number of infections continued to grow. In May, another 69 people got sick. Two PSWs died, and hospital workers got infected, too

Eight employees deployed by CHEO and the Royal tested positive, but did not require hospitalization.

The hospitals “took too long to come in there. They could have provided a lot more support for the home,” said Betty Yakimenko, who meets regularly with management as a member of Madonna Care’s family council.

“I don’t think they moved in fast enough.”

Pre-pandemic, the nursing home assigned three personal support workers and one licensed practical nurse to care for 36 residents on each ward, Yakimenko said.

The staff-to-resident ratio was untenable once visitors were barred from long-term care centres, Yakimenko said. Many families had assisted residents with feeding, bathing and tidying up rooms.

On top of losing the help of family members, Yakimenko said Madonna Care lost 60 per cent of its staff in mid-March after management ordered personal support workers to work at only one facility to limit community spread of the coronavirus. She wonders if health authorities knew about the staffing shortages.

“It’s hard to put total blame on staff when they’re running around trying to do what they can. At that point, more could have and should have been done to get more staff in there,” said Yakimenko.

According to Ottawa Public Health, in that period, a total of 157 residents and staff were infected. Forty-nine people died, including two personal support workers.

Dozens of families in Ontario have joined a class-action lawsuit against Sienna Living and Revera, another company that owns and manages seniors’ homes, alleging negligence. The lawsuit has yet to be certified.

Jane Meadus, a lawyer specializing in elder health, said Sienna Living should have hired more staff to keep residents from wandering after the outbreak was declared.

“These companies are making millions of dollars…. The home has an obligation to ensure that the residents are socially isolating and with dementia they should be constantly monitoring them,” said Meadus.

“It happens all the time because there isn’t enough staff to monitor residents. With the pandemic it’s now worse. What they need is eyes on the residents.”

The outbreak at Madonna Care ended on June 8. Ontario is relaxing pandemic rules, and long-term care facilities that are virus-free can start accepting new residents.