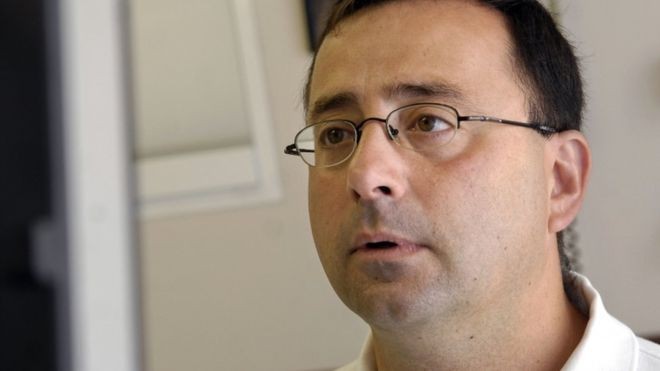 A judge has ordered a former USA Gymnastics doctor to be tried on sex assault charges, as an accuser said he abused her during hide-and-seek.

A 25-year-old woman testified that Larry Nassar molested her from the age of six until 12 during family visits to his Michigan home.

Mr Nassar, 53, is accused by more than 60 former patients and athletes of sexual abuse during pelvic procedures.

He is facing separate federal charges for possession of child pornography.

After testimony at a court in Mason, Michigan, Judge Donald Allen ordered Mr Nassar to stand trial on three counts of first-degree criminal sexual conduct with a person under 13 years old.

The accused, a sports doctor who treated US Olympic gymnasts, faces up to life in prison if convicted.

He was stripped of his medical licence last month, amid at least six criminal and civil lawsuits.

The unnamed woman, who was neither a patient nor an athlete, testified against him for more than two hours on Friday.

She detailed how Mr Nassar allegedly molested her during family visits to his home in Holt, Michigan, from 1998 to 2005.

“Almost every time I was there for a couple of years, something occurred,” she told the court.

Some of the abuse happened under a blanket as he sat next to her on the sofa, while her unwitting older brother sat nearby, she said.

When she tried to tell her parents about the molestation, they did not believe her.

“They made me feel like I had done something terrible,” she said, adding that they told her to apologise to the doctor. She refused.

When the woman left home for university, she again told her parents about her experience with Mr Nassar.

Her father, who committed suicide in March 2016, “crumpled” when she repeated her claims.

Mr Nassar was fired in September after working for decades as a doctor for gymnasts at Michigan State University, as well as USA Gymnastics – the sport’s governing body.

Allegations of sexual assault were first revealed by the Indianapolis Star newspaper in September 2016 when he was accused by two former gymnasts.

Since then, more than 60 women have accused him, and at least 40 have filed lawsuits.

Several of those suits name USA Gymnastics as a co-defendent, claiming they had not done enough to prevent the abuse.

She had worked as a coach for nearly 30 years, before she was suspended by the university, leading to her surprise departure.