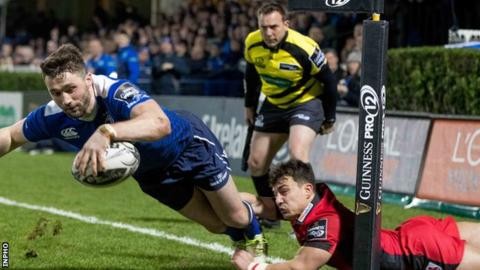 Leinster replaced Irish rivals Munster at the top of the Pro12 – at least overnight – by clinching a bonus-point victory over Edinburgh at the RDS.

Winger Barry Daly and fly-half Joey Carbery scored two tries each for the victors, who have reaped 19 points from their last four Pro12 matches.

Fly-half Duncan Weir scored all of Edinburgh’s points, including a well-taken 70th-minute try.

Munster can reclaim top spot on Saturday when they play Ospreys.

Leinster, losing finalists to Connacht last season, got an early touchdown after a fine break by flanker Leavy, on as an early replacement for Josh van der Flier. When the ball was recycled, Leinster had the numbers out on the left and Daly managed to just get in at the corner.

Edinburgh were having a lot of the possession without making it count on the scoreboard and they fell further behind when fly-half Carbery, who had been short with his conversion attempt, slotted over a straightforward penalty.

Weir quickly replied with a penalty for the visitors, who finished the first half strongly.

They could have been level but for a costly drop by Tom Brown in the last move of the half. The winger just had to collect a brilliant, swooping pass from Chris Dean to be in, but somehow failed to gather.

As the half-time whistle blew, a dejected Brown, who had earlier taken a knock, was consoled by team-mates and Leinster enjoyed an 8-3 interval advantage.

Leinster, unbeaten since Boxing Day, went further ahead as 21-year-old Carbery scored two tries early in the second half.

The Auckland-born fly-half, in his first start since December following ankle surgery, wriggled over from close range in the 48th minute after the home forwards had been held up several times just short of the line.

Then, on 53 minutes, turnover ball saw Leinster break from deep in their own half with Carbery finishing it off and Ross Byrne converting for 20-3.

Leinster, Pro12 winners in 2013 and 2014, clinched the bonus point when winger Daly ran through to score his second try of the evening.

Leavy then got on the end of a drive to get the hosts’ fifth try.

Weir grabbed Edinburgh’s sole touchdown but Bryan Byrne had the last word with a try which Ross Byrne converted for a 39-10 winning margin.

While interim head coach Duncan Hodge has steered Edinburgh to a home European Challenge Cup quarter-final, this was his eighth defeat from 11 Pro12 fixtures since succeeding Alan Solomons in September.