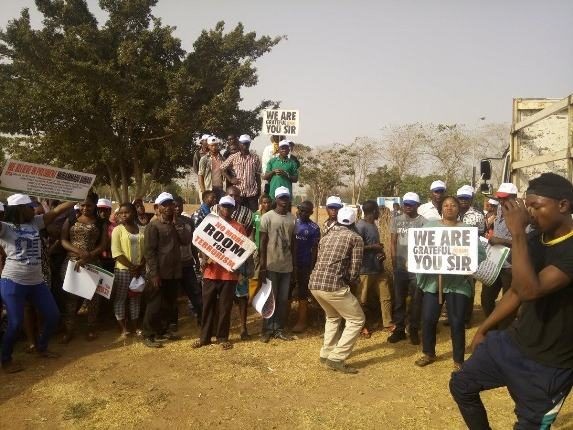 The Nigeria Union of Journalists and the Radio, Television, Theatre and Art Workers Union of Nigeria have spoken against Friday’s sack of 145 staff of Television Continental and Radio Continental.

The unions, in interviews on Saturday in Lagos, said that due process was not followed in the exercise, which the unions said they would take up with the management of the media organisations.

Lagos NUJ Council Chairman, Mr Deji Elumoye, said that investigations had revealed that TVC had a lopsided remuneration system where a few expatriates and management staff earned more salaries than the entire workforce.

Elumoye said that the sack was ill-timed, as according to him, the organisation was clocking 10 years and was supposed to be celebrating its anniversary.

“We even have the case of an expatriate whose salary is more than half of the salaries of the entire workforce that has been sacked.

“I do not know why the company had that type of structure at the top, where an individual is earning more than what the 145 disengaged staff were earning.

“The sack came at a very wrong time when the media is going through a trying period and we believe the management did not get their priorities right,” he said.

The NUJ council chairman said that the method of disengagement did not comply with labour laws.

Elumoye explained that information available to the union showed that the staff were served letters after a long wait, without their severance packages.

“We want to engage the management on why they were disengaged the staff without provision for their severance packages.

“It has been in the news for some time, the management ought to have worked on it and given them their cheques, compute their entitlements and also give it to them.

“To us, an injury to one is an injury to all and that is why we (the NUJ) will engage the management on why they should do this, especially when they are talking of their 10th anniversary,’’ he said.

The chairman explained that by next week, the union would take up the issue to see if the management could reverse its decision.

He said that information available to the union showed that the entire workforce of TVC was about 300, adding that 145 were too many to be laid off at once.

“What are the parameters used in laying off more than half of the workforce and why such a drastic decision?’’ he asked.

“I think this happened because of the economic situation. They want to restructure to make more money; all the same, we are shocked about this.

“We will go into the issue to know what happened so that we can come up with an official position.

“We will visit the organisation and also see the affected staff, so as to take necessary action.

“Even if the sacked staff officially belong to our union or not, the union would still stand for them,’’ he said.

Also, the Nigeria Association of Women Journalists during its monthly congress in Ikeja on Saturday condemned the sack.

Mrs Stella Sawyer of Tell Magazine and Mrs Julie Agu of Lagos Information, who discussed the issue under the State of the Nation, at the congress, expressed sadness on how the sacked journalists would be able to cope with the recession.

The Board of Continental Broadcasting Services Ltd (CBS), managers of Television Continental (TVC), and Radio Continental in Lagos, on Friday, laid off 145 staff.

A statement issued by the management of the media outfit said the decision was part of its effort to restructure its enterprises.

The media outfits are reportedly owned by Chief Bola Tinubu, a chieftain of the All Progressives Congress (APC) and former governor of Lagos State.