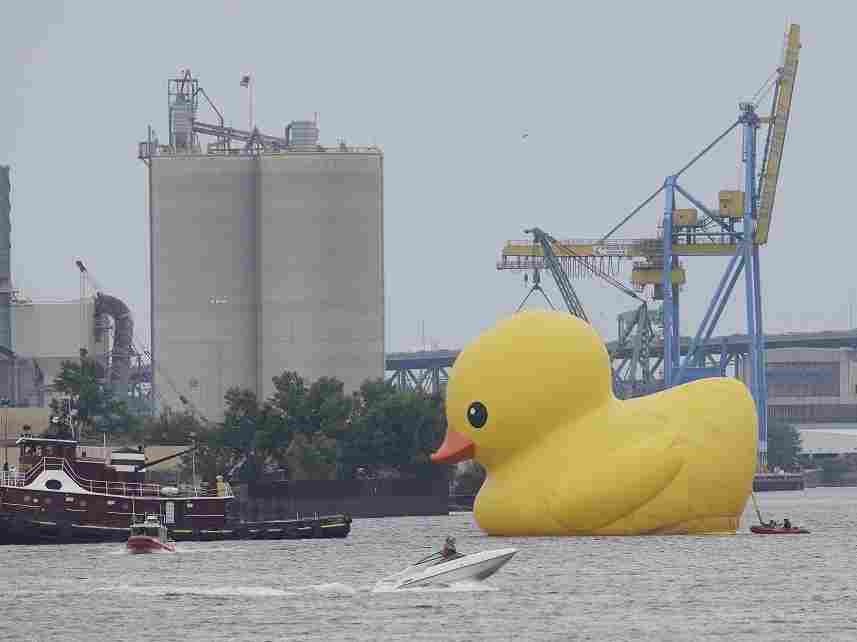 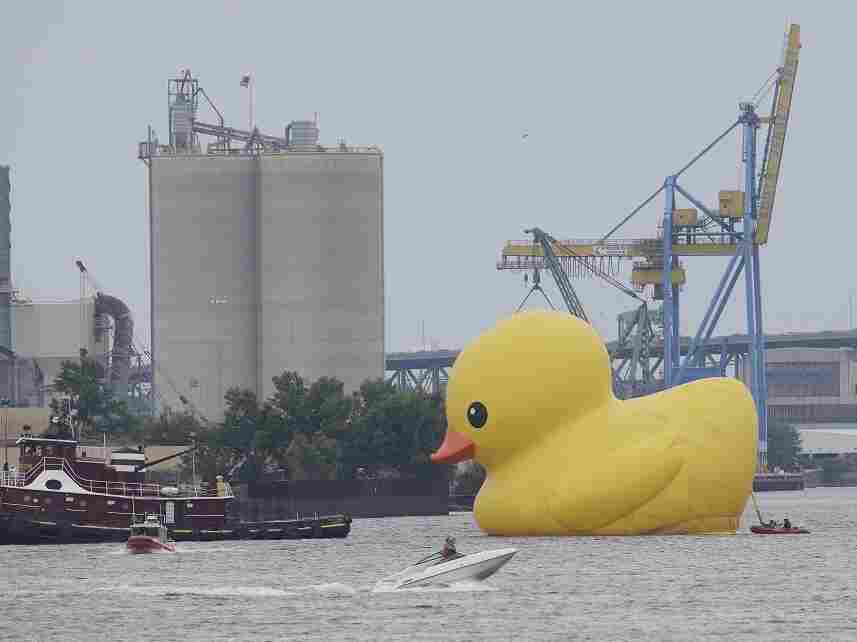 A giant rubber duck sails up the Delaware River between Camden, N.J. and Philadelphia during a tall ships parade in June 2015. This is the Samborski duck. Matt Slocum/AP hide caption

A giant rubber duck sails up the Delaware River between Camden, N.J. and Philadelphia during a tall ships parade in June 2015. This is the Samborski duck.

This is the story of a 61-foot-tall duck that is being called a counterfeit of a different giant duck, which itself is a replica of the beloved bath toy.

Got that? Here we go.

As part of a celebration for Canada’s 150th birthday, Ontario’s provincial government gave a grant to a waterfront festival, which will spend about $150,000 to rent and deploy a six-story floating duck. The oversized toy weighs 11 tons, and will visit 6 cities in the province.

In addition to the typical grumbling you would expect about a government spending money to rent a giant rubber duck, there’s also this: The original giant rubber duck maker says the fowl Ontario is getting is a counterfeit bird.

Dutch artist Florentijn Hofman‘s Rubber Duck has been showing up in the world’s ports since 2007. Cities the world over have paid for Hofman’s duck to float in their waterways and draw big crowds. It’s a statement duck, and Hofman says the statement is this: “We are living on a planet, we are one family, and the global waters are our bathtub, so it joins people.”

But then a guy named Craig Samborski made another enormous inflatable duck. That duck, which he and co-owner Ryan Whaley call Mama Duck, is even bigger. And some localities have hired that duck!

Including Ontario. Hence this press release sent from Hofman’s studio on Wednesday:

“The duck was never supposed to be used for profit. It was designed to be a public art installation to bring joy and hope wherever it went. By renting the duck at exorbitant rates against the wishes of its creator, Mr. Samborski not only is stealing this joy from the public, he is stealing from the legitimate artist and creator of this exhibit,” Enbers continued.

“We are deeply saddened that the Canadian people have to pay for the actions of Mr. Samborski. In fact, we feel that it is the antithesis of what we assume the Canada 150 celebrations should be all about. Had a Canadian government official tried to contact us, we would have provided the real duck. It is unfortunate this due diligence wasn’t completed.”

On Friday, CBC’s Carol Off interviewed Whaley, co-owner of the supposed counterfeit:

CAROL OFF: Mr. Whaley, these are serious claims being made about your duck by this artist. Is your duck a fraud?

RYAN WHALEY: It is not. I’d like to remind you that we are talking about a large rubber duck. So, the duck is public domain. That duck was actually created in the thirties, not by Florentijn Hofman as he claims … Our duck is actually based on a toy company in the thirties which is now considered public domain. We’ve actually had an intellectual property lawyer look into this and we were able to patent our duck and trademark it to have it at events. The duck, itself, could still be used by anybody. So, someone could take a picture of the duck we’re using and make a bigger one and there would be no legal precedent at all.

CO: But Mr. Hofman said you have been using his patterns, his design and his intellectual property.

RW: Once again, that duck is public domain. It goes back to the 1930s way before Florentijn Hofman ever did anything. … If he has any legal precedent at all, I would encourage him to reach out. But, he will not. 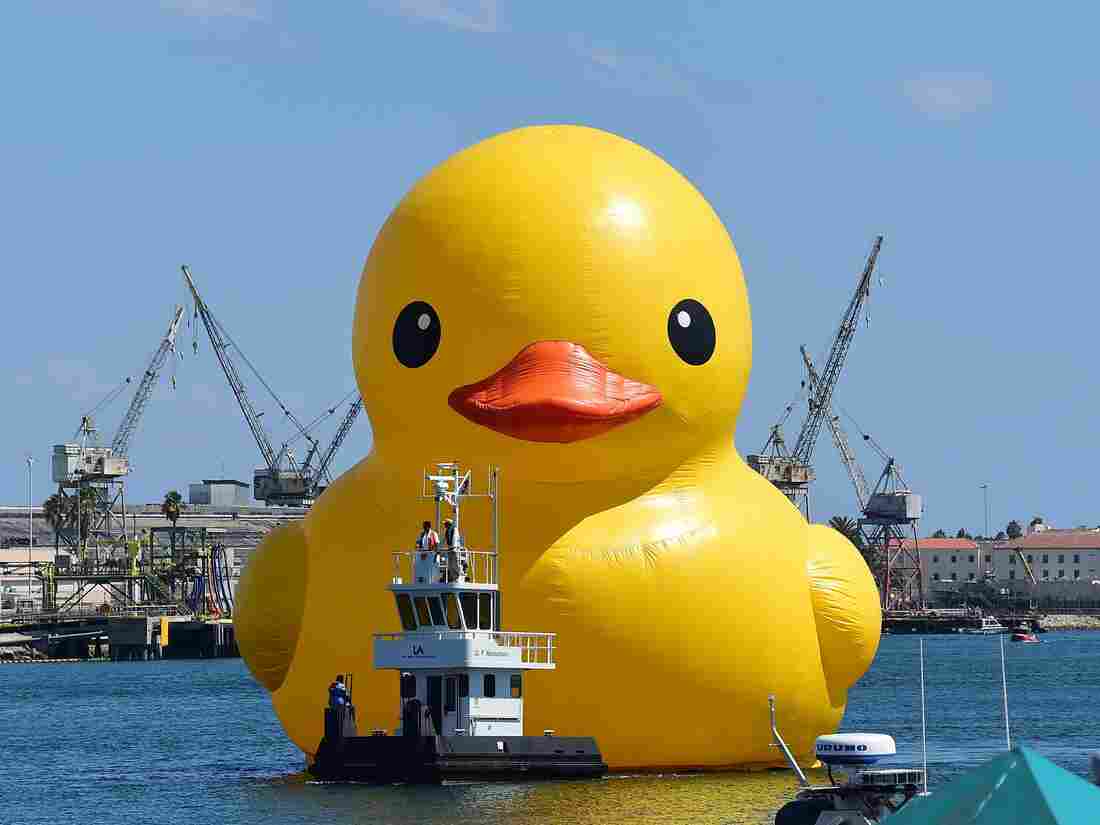 Events featuring Hofman’s duck have not always gone smoothly. In 2013, Rubber Duck floated in Hong Kong’s Victoria Harbor, until it deflated. A few months later, it popped up in Taiwan’s Keelung Port, when, before “scores of people gathered on a quayside,” it suddenly burst.

Hofman’s press release this week is not the alleged copyright issue around the duck. When the Pittsburgh Cultural Trust brought Hofman’s duck to town for a festival, a local man named Joe Wos made t-shirts depicting a rubber duck, accompanied by some Yinzer slang. The city’s Cultural Trust sent him a cease-and-desist letter, calling his t-shirts “a major problem.”

“It symbolizes the David and Goliath story,” Wos told the Pittsburgh Post-Gazette. “A little rubber duck versus a big rubber duck.”

And then that duck in Philly also deflated in dramatic fashion.

The rubber duck isn’t the only public art being scrutinized as a copycat. In 2015, a near-replica of Chicago’s Cloud Gate by Anish Kapoor popped up in Karamay, China. And just last week, artist Jeff Koons admitted that his 45-foot-tall inflated ballerina at Rockefeller Center was in fact a copy of a sculpture by a Ukrainian woman.

Beyond the copyright question and the ongoing exploding-duck problems, there’s also this question for city officials thinking of bringing a giant duck to town: Why?

CityLab’s Kriston Capps plumbed this issue in 2014, pointing out the cost not only to city budgets, but the opportunity cost of not spending that money supporting local artists:

“Cities that cash in with Rubber Duck are outsourcing their public art….

“Creativity is and ought to be a source of pride for cities as diverse as London, Beijing, and Los Angeles—and an engine for their economies. When I see images of it floating in a new harbor, I can almost hear Rubber Duck whispering, in a raspy duck voice: The place you love is no more.

“When it’s done right, public art expresses some unique value about a city’s particular cultural vantage point. Rubber Duck has all the nutritional value and regional identity of a Diet Coke.”

So for this summer’s birthday festivities, Ontario will get a huge duck. But it might end up a little deflated.