Trump ‘will walk away’ if North Korea talks not fruitful 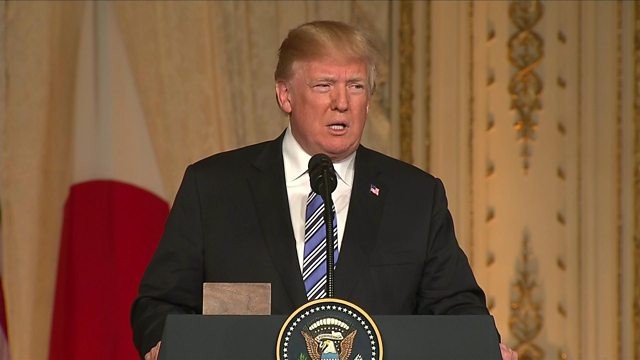 Trump ‘will walk away’ if North Korea talks not fruitful

US President Donald Trump says that if his planned talks with North Korean leader Kim Jong-un are not fruitful he will “walk out”.

At a joint news conference, he and Japanese PM Shinzo Abe said maximum pressure must be maintained on North Korea over nuclear disarmament.

Mr Abe is at the president’s Mar-a-Lago resort in Florida for talks.

He said Mr Pompeo had forged a “good relationship” with Mr Kim – whom the US president was last year calling “little rocket man” – and that the meeting had gone “very smoothly”.

The visit marked the highest-level contact between the US and North Korea since 2000.

Mr Trump is expected to hold a summit with Mr Kim by June. Details, including a location, are still being worked out.

What was said about the summit?

President Trump said at the joint news conference that if he did not think the meeting would be successful he would not go, and if the meeting went ahead but was not productive, he would walk out.

“Our campaign of maximum pressure will continue until North Korea denuclearises,” he added.

What else was discussed?

On trade, the leaders agreed to start talks on “free, fair and and reciprocal trade deals”.

Mr Trump said the US remained opposed to rejoining the Trans Pacific Partnership unless Japan and other parties to the trade pact offered “a deal that I can’t refuse”.

The US president did not exempt Japan from punitive steel and aluminium tariffs, as he has done for other US allies.

Turning to North Korea, Mr Abe said he had urged President Trump to help bring about the release of Japanese citizens kidnapped by North Korea in the 1970s and 1980s.

North Korea has admitted to abducting 13 Japanese citizens in order to use them to train its spies in Japanese customs. Japan believes the figure is much higher. The issue has soured relations between the two countries for decades.

Three US citizens are also being held in North Korea.

Mr Trump said the US would “work very hard” to try to bring the Japanese abductees home.

“We are likewise fighting very diligently to get the three American citizens back,” Mr Trump added.

“I think there’s a good chance of doing it. We’re having very good dialogue.”

What do we know about Mike Pompeo’s meeting?

The secret trip took place after Mr Pompeo was nominated by President Trump to replace Rex Tillerson as secretary of state.

No details are known about the talks other than that they were to prepare for the forthcoming Trump-Kim summit.

Mr Pompeo is expected to be confirmed as the top US diplomat by the Republican-controlled Senate in the coming weeks, although Democratic opposition to the conservative’s candidacy is strong.

Senator Robert Menendez, the top Democrat on the Foreign Relations Committee, said he did not think Mr Pompeo’s “past sentiments” reflected American values.

The hawkish CIA chief’s opposition to same-sex marriage has come under scrutiny and he has also made controversial remarks about Islam.

When and where might a Trump-Kim summit take place?

Mr Trump surprised the international community last month by accepting Pyongyang’s suggestion for direct talks. It would be unprecedented for a sitting US president to meet a North Korean leader.

He has said the summit will take place either in early June or “a little before that” and that several sites are under consideration.

Experts have speculated that a location for talks could be the Demilitarised Zone between North and South Korea, another Asian country, or a neutral European country.

North Korea has been isolated for decades because of its human rights abuses and pursuit of nuclear weapons, in defiance of international laws and UN sanctions.

It has carried out six nuclear tests, and has missiles that it says could reach the US.

But South Korea’s hosting of the Winter Olympics in February gave an unexpected window for diplomacy, and in the weeks since there have been a flurry of visits to the North from China, South Korea and now the US.