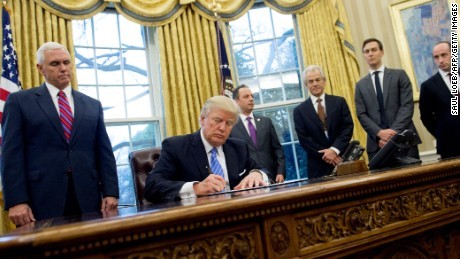 Once President Trump wraps up an initial foreign trip that aides believe has gone very well, the Commander-in-Chief plans to strike quickly next week to beef up the White House staff with a “war room” aimed at taking the fight to the administration’s critics more aggressively, according to two advisers to the president.

The names of David Bossie and Corey Lewandowski, two trusted hands from the Trump campaign, are being bantied about as possible additions to the White House staff.

But the advisers to the president stress both men are currently focused on continuing to help the president from outside, and no final decisions have been made on whether the president will ask them to officially join the administration or simply defend the president more aggressively from the outside.

The advisers to the president describe a hands-on Trump who is prepared to go on offense after realising perhaps belatedly that he has to get far more serious about two critical matters, pushing back against leakers in the federal government and dealing with the political damage from the various Russia investigations led by Congressional committees and Special Counsel Robert Mueller.

“It’s all hands on deck,” said one of the advisers to the president who is involved in the planning.

The second adviser added bluntly, “there are going to be some changes” to the president’s existing staff.

However, both advisers were adamant about stressing that the continued speculation about a massive staff “shakeup” is overblown, and that there is nothing imminent in terms of potential changes for Press Secretary Sean Spicer and other top aides.

Instead, the president’s moves next week are more likely to be about addition than subtraction. “It is about bolstering and adding on to the staff,” noted one of the advisers.

The website Axios quoted one Trump ally as saying, “The White House is embracing the fight, which is going to last as long as Donald Trump is president. We’re getting street fighters ready to go.”

The president has already selected Mark Kasowitz, a tough New York lawyer, to lead his outside legal team to focus on the investigations.

One adviser to the President noted Kasowitz is “ready to rumble” with the President’s critics from outside the White House, so now the focus is who will be added to the West Wing to help Trump.

In the spotlight now are Bossie and Lewandowski, two people who have the trust of the president but did not join the administration in the early months.

Advisers now describe Bossie and Lewandowski as still wanting to help Trump from the outside, but both men would be honoured and hard-pressed to say no if the President asks them for more direct help when he returns from the foreign trip.

Lewandowski said on “Tucker Carlson Tonight” Wednesday night that he has no plans to join the administration and only goes to the White House as a visitor.

But he still left the door open by saying he would be honoured if the president wants him to work in the White House.

“My loyalty is to the president and the agenda he ran on,” Lewandowski said, adding “if I can help the president do that, of course.”