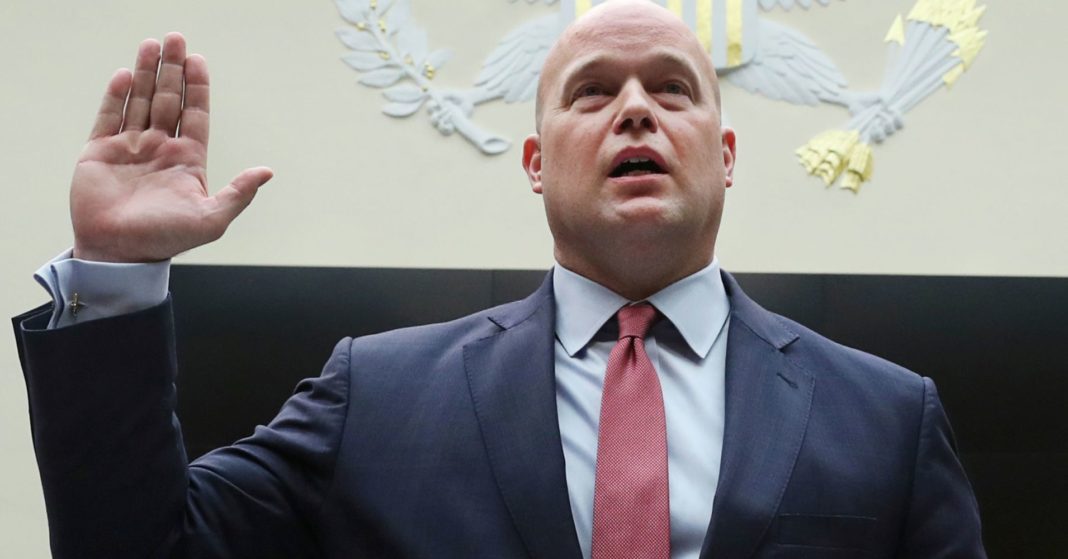 President Donald Trump suggested last year that Geoffrey Berman, the U.S. Attorney in Manhattan, take charge of a criminal investigation into hush money payments made to two alleged sexual partners of Trump, despite the fact that the prosecutor was already recused from being involved in that case, a new report says.

The New York Times also reported Tuesday that House Democrats are examining whether former acting Attorney General Matthew Whitaker perjured himself by telling a congressional committee this month that Trump never pressured him about various investigations — including the Manhattan federal probe into hush money payments.

The White House and the Justice Department had no immediate comment on the Times article, which was headlined, “Intimidation, Pressure and Humiliation: Inside Trump’s Two-Year War on the Investigations Encircling Him.”

Trump, in an Oval Office press event Tuesday, denied the anecdote about asking Whitaker if Berman could take over the hush money probe.

Berman is a former legal partner of Rudy Giuliani, one of Trump’s outside attorneys in the special counsel’s Russia probe.

The wide-ranging article from the Times says that Trump spoke with Whitaker in late 2018 about the ongoing probe in Manhattan into claims that the president directed his former personal lawyer Michael Cohen to facilitate payments to two women shortly before the 2016 presidential election.

Cohen’s confession came in connection with his guilty plea to violating campaign finance laws by facilitating the payments, which were not disclosed by the Trump campaign as a benefit to the campaign.

Cohen is set to begin serving a three-year prison term next month for those and other crimes.

The U.S. Attorney’s Office for the Southern District of New York, which is headquartered in Manhattan, has continued to investigate the payments. The case is considered to be a potential serious legal threat to Trump.

The Times, citing what it said are “several American officials,” reported that in late 2018 called Whitaker and asked whether Berman could be put in charge of the probe.

According to the report, Whitaker had told some of his associates that part of his job was to “jump on a grenade” for Trump, but knew he could not put Berman in charge of the case because he was already was recused from the case.

Trump, the Times said, then “soured” on Whitaker, “and complained about his inability to pull levers at the Justice Department that could make the president’s many legal problems go away.”

The president told reporters on Tuesday that the idea he had soured on Whitaker also was not true.

He said he has a “very good” relationship with Whitaker, who remains in a top Justice Department counselor position after the confirmation last week of William Barr as attorney general.

In the case of Cohen, Berman was recused by senior Justice Department officials.

Berman, besides being a former law partner of Giuliani’s, was personally interviewed by Trump before the president put him in charge of the Manhattan U.S. Attorney’s office.

Sen. Kirsten Gillibrand, the Democrat from New York who is now running for president, condemned Berman’s appointment at the time. “Deeply disturbing considering the conflicts of interest inherent by his potential jurisdiction on matters that could affect the president personally,” she said.

Because of Berman’s recusal, the probe into Cohen, as well as the ongoing investigation of the hush money payments, has been headed by Berman’s deputy, Robert Khuzami.

However, people familiar with the cases Berman has brought said that his offices investigation into the Trump Inaugural Commiteee is being pursued under his direction, according to NBC News.

The Manhattan federal probe is distinct from the ongoing federal investigation by special counsel Robert Mueller into Russian interference in the 2016 presidential election, and possible collusion by the Trump campaign. Trump has denied any wrongdoing in all of the cases.

On Feb. 8, during testimony before the House Judiciary Committee, Whitaker had said, “At no time has the White House asked for nor have I provided any promises or commitments concerning the special counsel’s investigation or any other investigation.”

He added: “Since becoming acting attorney general I have run the Department of Justice with fidelity to the law and to the constitution.”