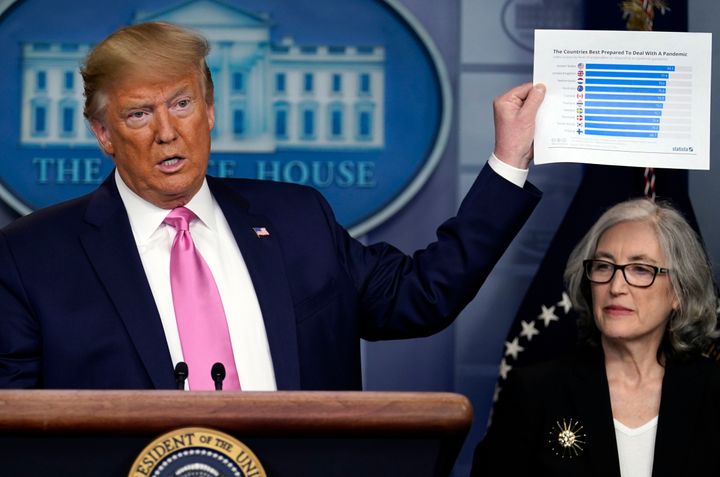 “Because of all I’ve done, the risk to the American people remains very low,” he said in a Wednesday evening White House news conference about the coronavirus crisis he has spent weeks downplaying. “We’ve had tremendous success beyond what people would have thought.”

He also put Vice President Mike Pence in charge of the government’s coronavirus response, while denying Pence would serve as “czar” – a title he had mocked when Obama had used in his response to the Ebola outbreak in 2014.

“Mike is not a czar. He’s vice president,” Trump said.

In 2014, Trump relentlessly attacked Obama’s handling of the Ebola epidemic in Africa, savaging him in nearly 100 Twitter posts over a three-month period.

“The United States must immediately institute strong travel restrictions or Ebola will be all over the United States-a plague like no other!” Trump wrote on Sept. 30, 2014.

“Obama just appointed an Ebola Czar with zero experience in the medical area and zero experience in infectious disease control. A TOTAL JOKE!” he wrote two weeks later. (Wednesday, Trump defended his choice of Pence, who is also not a doctor or scientist, because he had been a governor.)

Rush Limbaugh, the right-wing radio host Trump honored with the Presidential Medal of Freedom earlier this month, claimed in 2014 that Obama administration officials “have this attitude, ‘Well, if they have it in Africa, by God, we deserve to get it, because they’re in Africa because of us and because of slavery.’”

Ronald Klain, a veteran of both the Bill Clinton and Obama White Houses, was that Ebola “czar,” tasked with coordinating the responses from the various executive branch agencies dealing with the outbreak. Both Klain and Obama ultimately won praise for their handling of the crisis, and Obama later institutionalized the structure Klain had established, creating, for example, a senior position on the National Security Council to respond to pandemics.

Jeremy Konyndyk, who worked on the Ebola team at the United States Agency for International Development, said that the lack of a streamlined process had been a hindrance as they dealt with that outbreak. “It was very fragmented, and it became a handicap,” he said.

Trump, however, eliminated the pandemic response team, including the top-level NSC member, just as he has reversed Obama policies throughout the government.

A senior administration official, speaking on condition of anonymity, said that while the NSC position had been eliminated, its duties had been absorbed into other positions on the council. “Similar responsibilities still exist at the National Security Council but under different titles,” the official said, adding that the council “is staffed by officials with extensive experience and expertise including in virology, infectious disease epidemiology, global health security, public health, and emergency response.”

Konyndyk, though, said that elimination of the NSC position reporting directly to the national security adviser makes a rapid response on global health issues more difficult.

He said the Trump administration’s response to the current crisis has seemed fixated on the notion that the virus could be kept from ever making it to this country, rather than coming up with a plan to deal with it once it does.

“The ball has been dropped,” Konyndyk said. “They’ve lost a month where they could have been doing that.”

At Wednesday’s press conference, Trump took questions for some 45 minutes, giving unusually calm advice that Americans should treat the virus like the seasonal flu by washing their hands and staying home if they felt ill. He did, however, at times veer off into campaign mode, claiming he would beat any of his potential Democratic opponents, blaming some of the recent 2,000-point stock market decline on Tuesday’s Democratic debate, and insulting Senate Minority Leader Chuck Schumer (D-N.Y.) and House Speaker Nancy Pelosi (D-Calif.).

“I think Speaker Pelosi is incompetent,” Trump said, responding to her earlier statement that the president does not know what he is talking about on the coronavirus issue. “She’s trying to create a panic. And there’s no reason to panic.”

The briefing was nevertheless a dramatic shift from how Trump and his White House had been characterizing the virus since it became a global health threat two months ago.

Trump has, in recent days, claimed the new coronavirus is “very much under control,” that it “will go away in April” with the warmer weather, and that, in any event, his administration was doing “a great job” of handling it.

At times, he has seemed far more concerned about the virus’ effect on the stock market than on human beings. “Stock Market starting to look very good to me!” he wrote on Twitter on Monday, while he was in India and as the market was halfway through a deep, two-day slide.

Wednesday morning, just returned from his India trip, Trump accused the news media of intentionally overhyping the danger of the virus in order to hurt the stock market and, therefore, his reelection chances.

“Low Ratings Fake News MSDNC (Comcast) & @CNN are doing everything possible to make the Caronavirus look as bad as possible, including panicking markets, if possible. Likewise their incompetent Do Nothing Democrat comrades are all talk, no action. USA in great shape!” he wrote.

Trump’s nothing-to-worry-about message has been at odds with statements and congressional testimony from his own administration, including members of the coronavirus “task force” he named at the end of January and led by Department of Health and Human Services Secretary Alex Azar.

Azar told lawmakers on Tuesday that more U.S. coronavirus cases are likely, as had the Centers for Disease Control’s Nancy Messionnier.