Doug Ford hints at his re-election strategy for 2022 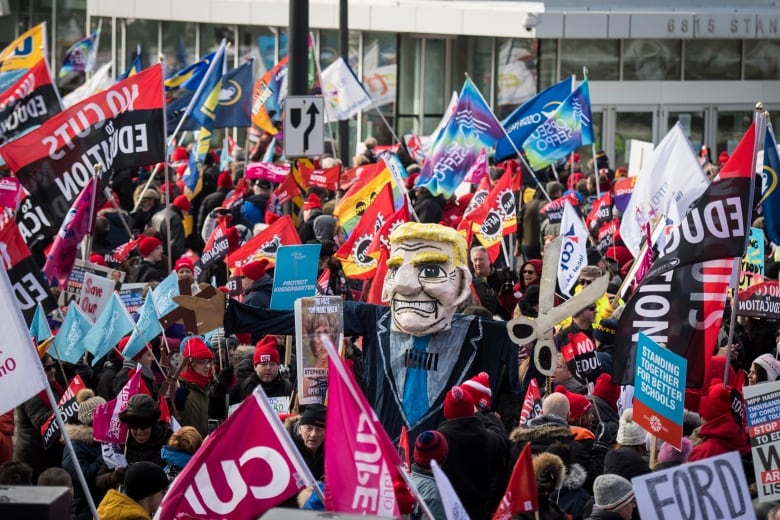 Ontario Premier Doug Ford is offering a glimpse of his strategy for winning a second term in office, more than two years before the next election.

In a speech to Progressive Conservative party members in Niagara Falls this weekend, Ford reeled off figures about the health of Ontario’s economy and went on the political offensive — but not against the official opposition NDP.

Ford’s target was the Ontario Liberal Party, which holds just six seats in the legislature and remains without a leader until its convention on March 7. Ford attacked the leadership candidates with a tone that suggests — regardless of who the Liberals choose — that he will run in 2022 on a similar message as in 2018.

“My friends, the 2022 campaign starts today, starts now,” Ford told the crowd of around 1,000 party faithful.

“The people we’re up against, they’re the same ones that ran this province into the ground,” he said in his speech. “The same people running for the Liberal leadership. The same crew at the table with Dalton McGuinty and Kathleen Wynne making these reckless, reckless decisions.”

Ford also called the Liberal leadership candidates “the same people who raised your taxes, gave sweetheart deals to the insider friends, and maxed out the taxpayers’ credit card on wasteful spending and endless scandals.”

There’s a clear reason behind Ford’s strategy of targeting the Liberals. The scenario the PCs fear most in 2022 would be “progressive” voters rallying en masse to either the NDP or the Liberals in an effort to vote Ford out.

The way that Ontario’s political math breaks down suggests that the worst formula for Ford’s PCs is a revitalized Liberal party and a weak NDP. That’s why you can expect Ford to step up his attacks on the Liberals and their new leader. That leader is likely to be former cabinet minister Steven Del Duca, based on the number of delegates he attracted for the March 7 convention.

The other thrust of Ford’s re-election message looks to be the economy and jobs.

“Our economy is firing on all cylinders. Over 307,000 new jobs have been created in Ontario since we took office,” said Ford. “We’ve created more jobs in 18 months than the Liberals chased away in a decade.”‘

Ford can use a message of “the economy is booming, and keep the Liberals away from government” to try to get re-elected. But every incumbent government is judged on its own record.

Ford has kept a number of his election pledges, while others remain very much works in progress.

Hydro bills are not lower than when he came into office (he promised a 12 per cent reduction). Hallway medicine remains a problem (he promised to end it.) The deficit is currently running at $9 billion (he promised to balance the budget, eventually.)

Ford also promised to end the sweetheart deals for insiders, but spent much of his first year in power embroiled in allegations of favouritism for appointing unqualified friends and connections to jobs ranging from OPP commissioner to Ontario’s trade representative in the U.K.

In four straight elections before that, under three different leaders, the PCs took around 1.5 million votes each time. That’s the party’s core support, and these voters are highly loyal to the Tories, but they’re not enough to win in Ontario.

Ford came to power in 2018 largely on a wave of voter desire to kick out the Liberals after 15 years in government. That’s clearly what motivated a large segment of those 800,000 voters who swung to the PCs.

To hang on to those crucial voters in 2022, Ford will need to persuade them that he deserves a second term, and that likely requires a stronger argument than simply “keep the Liberals out of power.”