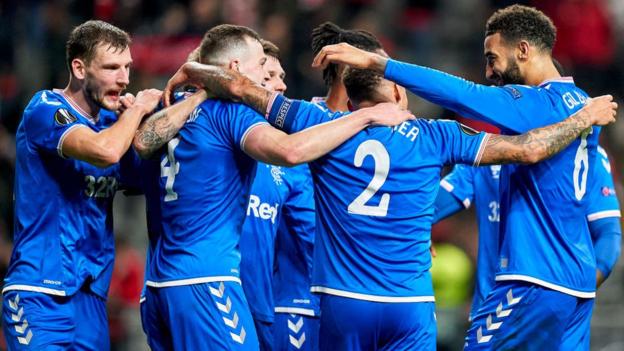 Ryan Kent’s strike in Portugal completed a 4-2 aggregate win and sent the Ibrox side through to the last 16.

Gerrard’s side have endured what he described as “indifferent” domestic form in recent weeks but the manager said they were “faultless” in Portugal.

“It’s one thing giving a team a game plan, but it’s another trusting them to carry it out,” Gerrard told BT Sport.

“I thought they were faultless, certainly out of possession. Super proud of the players. To a man, they were outstanding.

“The idea was to let their back five have the ball because they were the least dangerous players on the pitch. We knew we had to give the ball up but when we won it, we had to be brave to go and create.”

Braga had dominated the first hour of the first leg, racing into a two-goal lead, but Ruben Amorim’s side struggled to find their rhythm at Estadio Municipal.

They conceded a first-half penalty, which Ianis Hagi had saved, before Kent breached their defence after the break.

“Ryan is a player that we need that level of contribution from,” Gerrard added. “There have been a lot of opinions on Ryan of late on what type of form he is in, but he delivered a big moment for us.

“People don’t give him the credit he deserves in terms of the amount of running he does for us – but some of the opinions I have been reading of late on Ryan are ludicrous. He’s a top player.”

Rangers now go into Friday’s last-16 draw, with several major European clubs among their opponents. A tie with Celtic is also a possibility, should they get past Copenhagen.

Gerrard, though, is bullish about his side’s chances.

“This is no fluke,” he said. “This is something that’s been earned with sheer hard graft and to a man, everyone sacrificed themselves for the club.

“When you represent Rangers and results are indifferent, we understand criticism is going to come our way. At times we’re going to have to take that on the chin.

“But we knew there was an opportunity tonight, which would’ve been really special from where we’ve come from to now.

“We’ll be really proud when we sit there and the draw’s made. We’re ready for whatever comes our way.”