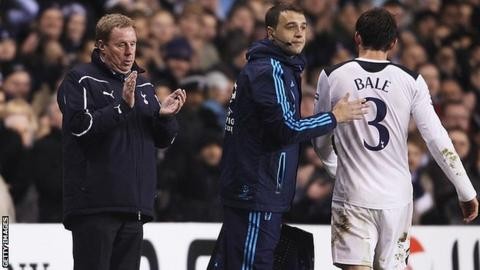 Spurs made the Champions League for the first time during Redknapp’s four-year tenure at the club, reaching the quarter-finals in 2011.

The 69-year-old says he would not swap manager Mauricio Pochettino’s starting XI for any other side in the division.

“I have absolutely loved the way they have played – their football, the pace of the full-backs.

“Tottenham will go on and win the Premier League in the next three or four years.”

Spurs sit third in the Premier League, 10 points behind leaders Chelsea, but lost to Liverpool on Saturday and at Gent in the first leg of their Europa League last-32 tie on Thursday.

They have not won the title since 1961 and finished third last year after looking like champions Leicester’s main challengers for long periods.

But Tottenham expect to have a new 61,000-seater stadium completed in time for the 2018-19 season, which Redknapp, who left the club in 2012, believes will play a big part in any future success.

“They’ve not been up there with the big spenders,” he added. “Now with the new stadium the crowds are going to nearly double.

“The man who owns the club, Joe Lewis, is up there with the richest men in the world. So there’s certainly no shortage of money.

“Maybe they do run out of steam, maybe he [Pochettino] hasn’t been able to rotate and could do with another three or four top players to give him the strength in depth.

“If you said to me ‘go and manage any team you want’, I would take Tottenham’s best XI.”