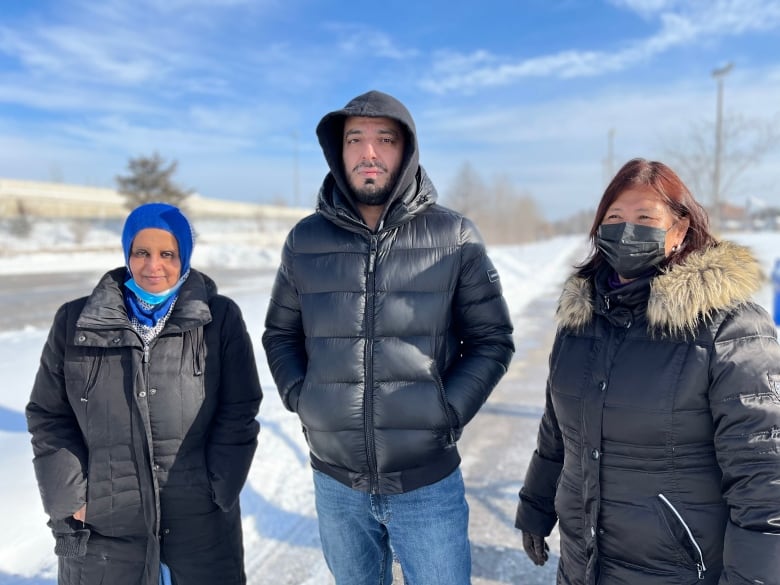 The former executive director of a Toronto charity is wanted by police in connection to allegations he misappropriated as much as $365,000 in public funds and donations.

Toronto police say an arrest warrant was issued for François Yabit on Dec. 10, 2021, for an offence known as “uttering” a forged document — that is, allegedly forging a document to commit fraud. His whereabouts are currently unknown.

“Investigators urge him to contact his lawyer and arrange his surrender,” said police spokesperson Caroline de Kloet in an email Friday.

The charity Yabit headed, Northwood Neighbourhood Services (NNS), is also under investigation by the City of Toronto and the United Way, its major funders.

CBC News reviewed hundreds of pages of internal documents and court filings that show that in 2020, when Yabit was the executive director, he allegedly used the charity’s funds to purchase an SUV in his own name, wrote cheques to his wife totalling more than $20,000 for services that staff claim were never provided and loaned a company of which he was a director and shareholder $290,000 to buy a condo.

Yabit was terminated in January 2021 after the board found out about his alleged misconduct, but the city and United Way were only made aware of the situation eight months later, when staff at NNS took it upon themselves to report their concerns and request an independent investigation last September.

A group of employees told CBC News they reported what happened to funders because their internal efforts to push for a third-party investigation had gone nowhere. They say they were particularly worried because the chair of the board of directors, Huma Tahir, took over as executive director — despite signing off on the cheques in question and the loan Yabit allegedly misappropriated.

Idrees Sharif was one of those whistleblowers.

He worked for NNS as a refugee settlement counsellor for 16 years until, Sharif says, he was fired last month for breaching confidentiality after sending a series of emails to management, staff and former board members pushing for an external investigation.

“We want justice,” Sharif told CBC News. “This fight is not easy for us. We have been going through a lot of emotional distress.”

NNS runs a refugee sponsorship program that holds millions of dollars in trust from family sponsors, as well as providing settlement services for newcomers and support for seniors in the community. The registered charity was founded 40 years ago and receives most of its more than $1 million in annual funding from a combination of other charities, the City of Toronto and the Ontario government.

After Yabit’s termination on Jan. 29, 2021, the charity sued the former executive director and his company and recovered $305,000, which related to the loan plus interest. But more than $20,000 issued to Yabit’s wife for allegedly unfulfilled service contracts and the 2018 Toyota 4Runner allegedly purchased in his name are still missing.

“I feel very discouraged and angry and frustrated,” said Blanca Alvarez, a settlement worker who has been at the charity for nearly two decades.

“These events have been happening for more than two years now.”

Yabit did not respond to a request for comment from CBC News.

But in an email, his lawyer, Rocco Achampong, said his client and NNS “have settled 98 per cent of all outstanding issues, and the remaining issue shall be settled in short order.”

“Mr. Yabit has served the newcomer community with distinction with settlement services that has assisted many new Canadians with integration,” Achampong said.

Achampong declined to comment further about the police warrant for Yabit’s arrest.

Tahir, the former board chair, took over as interim executive director after Yabit was let go and was then appointed by the board to the position full time in November 2021.

In a statement to CBC News, Tahir said she signed the cheques to Yabit’s wife and a Toyota dealership because they had the necessary supporting documentation, and she was not aware the recipient was Yabit’s wife when she signed.

Board says it didn’t know about conflicts of interest

“The board (and I as the board chair then) signed off on certain actions and transactions based on the information provided to us by the management,” Tahir wrote. “If we had the knowledge about malpractices, we would not have signed it off.”

In terms of the $290,000 the charity loaned to Cameroon Canadian Investment Group in June 2020 for a real estate investment, Tahir says the board approved the loan because Yabit never disclosed his personal interest in the company.

When the board found out about the “malpractices,” Tahir told CBC News, it sought legal advice, fired Yabit, went to court to recover the $290,000 investment and reported Yabit’s actions to Toronto police.

The condo was sold in September 2021, and the money has been returned after an Ontario Superior Court judge presiding over the lawsuit ordered the defendants to pay back the charity from the proceeds of the sale in December.

Tahir says the charity has also demanded that Yabit pay back the funds issued to his wife and return the SUV to the charity, but it’s had no success and is “waiting for recoveries through the police.”

Toronto police confirmed on Thursday that they received a report from NNS in April 2021.

Cheques to wife and SUV purchase

Documents show Yabit signed off on cheques to his wife for $12,339 and $8,400 in July and December 2020, respectively, — along with corresponding service agreements — for her to provide women’s entrepreneurship training and then mental health workshops.

Staff and an internal report say those services were never provided.

The lawsuit claims, and internal documents show, that Yabit used more than $54,000 in NNS funds to buy a 2018 Toyota 4Runner in his own name in December 2020. Cheque requisition documents for the purchase claim the SUV was paid for through a grant that Second Harvest provided NNS for a vehicle to deliver food.

CBC News sent a copy of the supposed funding agreement used to support the purchase to Second Harvest, a food rescue charitable organization in Toronto.

In a statement, chief executive officer Lori Nikkel said Second Harvest never agreed to fund the purchase of a vehicle.

Instead, she said, Second Harvest provided NNS with $17,500 in 2020 through a fully executed agreement for a number of community services — including cooking and packaging meals for vulnerable seniors for eight weeks and purchasing gift cards for refugee families.

Funders not aware of issues until last fall

None of the alleged funding problems were reported to the City of Toronto or United Way until Sharif and three other employees submitted written complaints to the funders on Sept. 29, 2021. Two days later, the city says, it opened an investigation — which is ongoing.

In a statement, a spokesperson told CBC News that city staff contacted the leaders of the charity late last month to discuss its “key concerns and next steps, which included a formal review of financial and administrative practices.”

The United Way told CBC News that at this point, its oversight process has found that NNS has been delivering on the programs it funds. But the United Way added that it has requested a number of NNS documents to get a full picture of the situation, and it is still in the process of reviewing those.

Sharif, Alvarez and two other employees also say they reported the allegations of misappropriated charitable funds to the Canada Revenue Agency’s (CRA) charities directorate because they allege management refused to do so.

Tahir told CBC News that the charity will report Yabit’s actions to the CRA as part of its 2021 annual return because the former executive director’s termination took place outside its reporting period to the CRA for 2020.

In a statement, the CRA said it can’t confirm whether or not it received a complaint or provide any updates on complaints it has received because of confidentiality provisions in the Income Tax Act. The government body only makes its actions related to registered charities public when it revokes charitable status or otherwise penalizes the charity.

Those confidentiality provisions and fewer annual charity audits by the CRA in recent years mean government oversight of the charity sector in Canada is kind of like the “Wild West,” said Toronto lawyer Mark Blumberg, who advises non-profits and registered charities.

“A complaint could be made, CRA can see a problem with the charity, but it can take five, 10, 20 years for the charity to be revoked,” he said. “They can’t say if anything’s gone wrong in the charity.”

Given those limitations, Blumberg said, the most effective charity-sector oversight in Canada comes from donors, funders and, most often, the media.

Sharif, Alvarez and the other employees say they hope their complaints are resolved so they can focus on helping their community through NNS’s programs.

Sharif also said he wants his job back.

“I want to help the new refugees that are coming,” he said. “That was my passion to help people.”