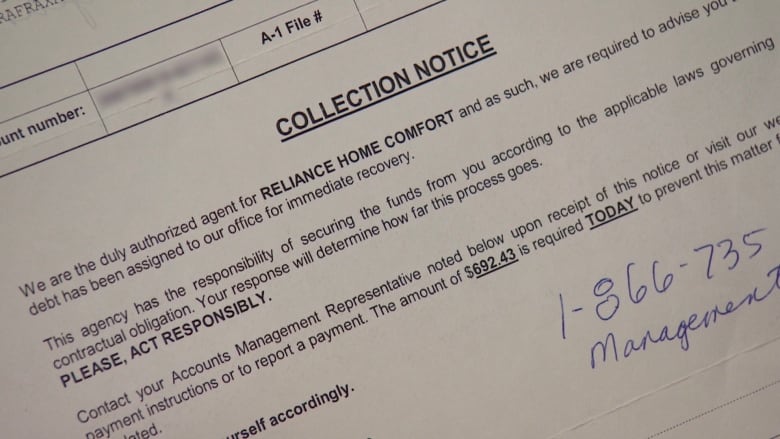 When Herman and Patricia Bucking bought a 40 hectare farm outside of Orangeville, Ont., in 2010, they built their dream home from the ground up; a peaceful oasis perfect for retirement.

That peace was interrupted seven years later, when the couple got a letter from a collections agency demanding $692.43 for a Reliance Home Comfort rental water heater they had never laid eyes on.

“The amount … is required TODAY to prevent this matter from being escalated,” the letter warned. “Your response will determine how far this process goes.”

It didn’t add up.

“I was shocked and couldn’t figure out why and what this was all about,” said Patricia Bucking in an interview with Go Public.

When the couple bought the property, they got a permit to tear down the previous owner’s old farmhouse and build their own. They didn’t know anything about a rental water heater or the contract that went with it.

The affidavit at the time of closing — a standard document signed by a homeowner the day they sell — stated: “There are no rental contracts relating to any of the systems or their components on the property.” The real estate listing for the property made no mention of the rental.

“There was absolutely nothing on there to say that there was anything attached to the property as far as rental equipment, or any equipment at all,” she said.

The Buckings are among the dozens of homeowners who have contacted Go Public because of fights to get out of rental contracts they never signed for HVAC equipment, such as furnaces, air conditioners and more.

The couple’s lawyer, Harjot Gill, says he’s heard of cases where people are stuck with these contracts after purchasing a home with existing agreements that no one told them about — or ones they didn’t investigate.

“People are blindly putting in offers and going on … with no conditions on homes,” he said.

A $700 bill might not seem huge in the context of a home sale — and far less than legal fees could amount to if the Buckings fought it. But Gill took on the case pro bono, saying that Reliance has taken advantage of the couple.

For Patricia Bucking, the thought of their credit rating taking a hit has kept her up at night.

“We have worked very hard and missed out on a lot of wonderful things because we have made sure that all of our bills are paid, and I wanted to make sure that this was clear,” she said.

She called Reliance in 2017 thinking it was a misunderstanding, but the company didn’t budge.

So, the couple got their lawyer at the time, who has now retired, to write to the collections agency that sent the letter, explaining there was no contract between Reliance and the Buckings and “payment for any hot water heater was solely the responsibility” of the previous homeowner.

WATCH | Why the Buckings refused to just pay the bill: 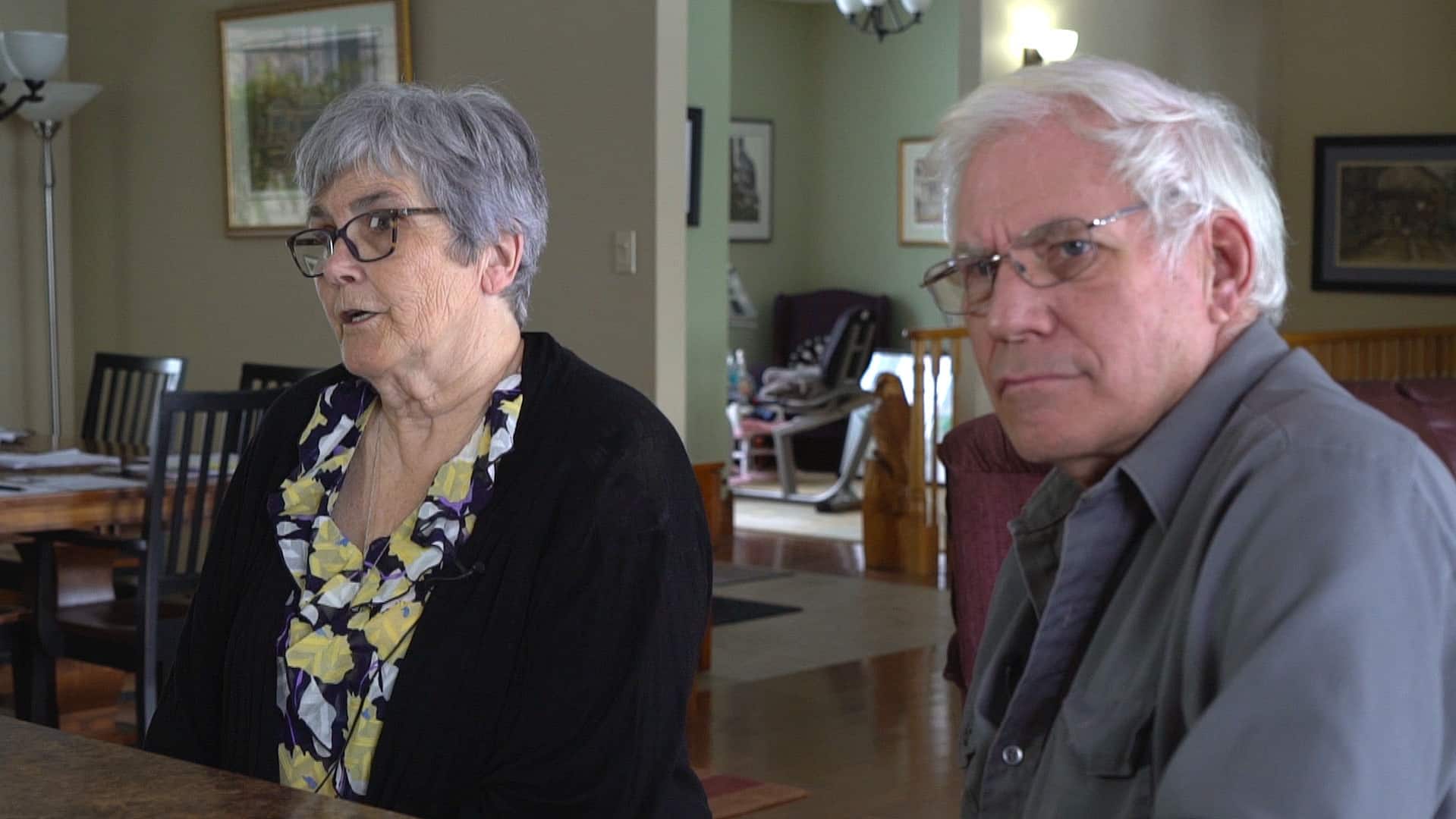 ‘I just want it done’: Homeowners concerned for credit rating

Patricia and Herman Bucking explain why it’s been stressful getting a bill for a water heater they didn’t rent — and why they refused to pay. 1:05

It appeared the previous homeowners had signed a water heater contract and it wasn’t mentioned in the property’s purchase agreement.

The Buckings thought the problem had gone away, until last October.

That’s when they received another letter in the mail, this time from a law firm representing a different collections agency seeking payment for the same Reliance water heater.

After hearing from Go Public, Reliance said it would ensure that the couple would never hear from a collection agency again.

No grounds to go after the Buckings

According to the terms and conditions of Reliance’s own contracts, the Buckings could only be held responsible for the rental water heater if the seller disclosed it in the purchase agreement and if the Buckings agreed to take on future payments — which they did not.

“[Reliance doesn’t] have any grounds to go after the Buckings because [the] Buckings didn’t sign the contract, [they] didn’t assume a contract,” Gill said.

The lawyer says the previous homeowner has since died, so the only way Reliance can recoup lost payments is to go after their estate.

“And that’s all they can basically do. They can’t sue these innocent people,” Gill said.

He says companies that are owed money for rental appliances would normally register a notice of security interest on a property’s land title to alert anyone looking at the property that they have an interest in it.

Gill says he pulled the title to make sure there was nothing registered on the property, such as a lien. It came back clean.

“If it’s not on the title, you don’t know it exists basically,” said Gill, who added that you wouldn’t necessarily know by looking at a water heater if it was a rental.

Reliance says it’s done nothing wrong, but agreed to call off the collection agency.

“Our records show that a Reliance rental water heater was installed … and was rented by the previous homeowner,” wrote Mike Kolatschek, Reliance Home Comfort’s manager of corporate communications in a statement to Go Public.

“Upon sale of the property, Reliance was notified that the new homeowners would be assuming the rental asset and we opened the rental account and began billing for use of our equipment accordingly.”

Kolatschek wouldn’t provide details about who notified the company, or when.

“We had no knowledge of that transaction,” said Herman Bucking. “I don’t know what sort of correspondence goes back and forth to them, but our lawyer certainly didn’t know.”

Kolatschek added that when the account wasn’t paid it was referred to collections.

He said Reliance was not aware that the previous homeowner did not tell the Buckings about the water heater rental, and that Reliance had not been provided with the property’s purchase agreement until recently.

“With this new information … Reliance will absolve Mr. and Mrs. Bucking from the $692.43 debt related to this rental equipment,” wrote Kolatscheck.

While this is good news to Patricia Bucking, she says she’s not ready to let the company off the hook just yet.

“We want it done with, but I also want answers,” she said. She wants to know that Reliance will ensure that her and her husband’s credit rating won’t be affected.

She says this situation has caused her a great deal of stress in the midst of an already difficult pandemic.

Get it in writing

Gill says, unfortunately, some homeowners in the same situation will just go ahead and pay the bill, even though it’s not their debt to clear.

“There’s a chance that people would just say, OK, I want to get rid of this. I don’t want them to keep calling me again. I’m busy with work,” he said. “And you know what? That’s a win for the company.”

Patricia and Herman Bucking say they considered that, but decided to fight.

“I will not give money to somebody that I do not owe it to,” he said. “We’ve been wronged and I think we should be apologized to for it.”

WATCH | Due diligence can protect homebuyers from surprises, says lawyer: 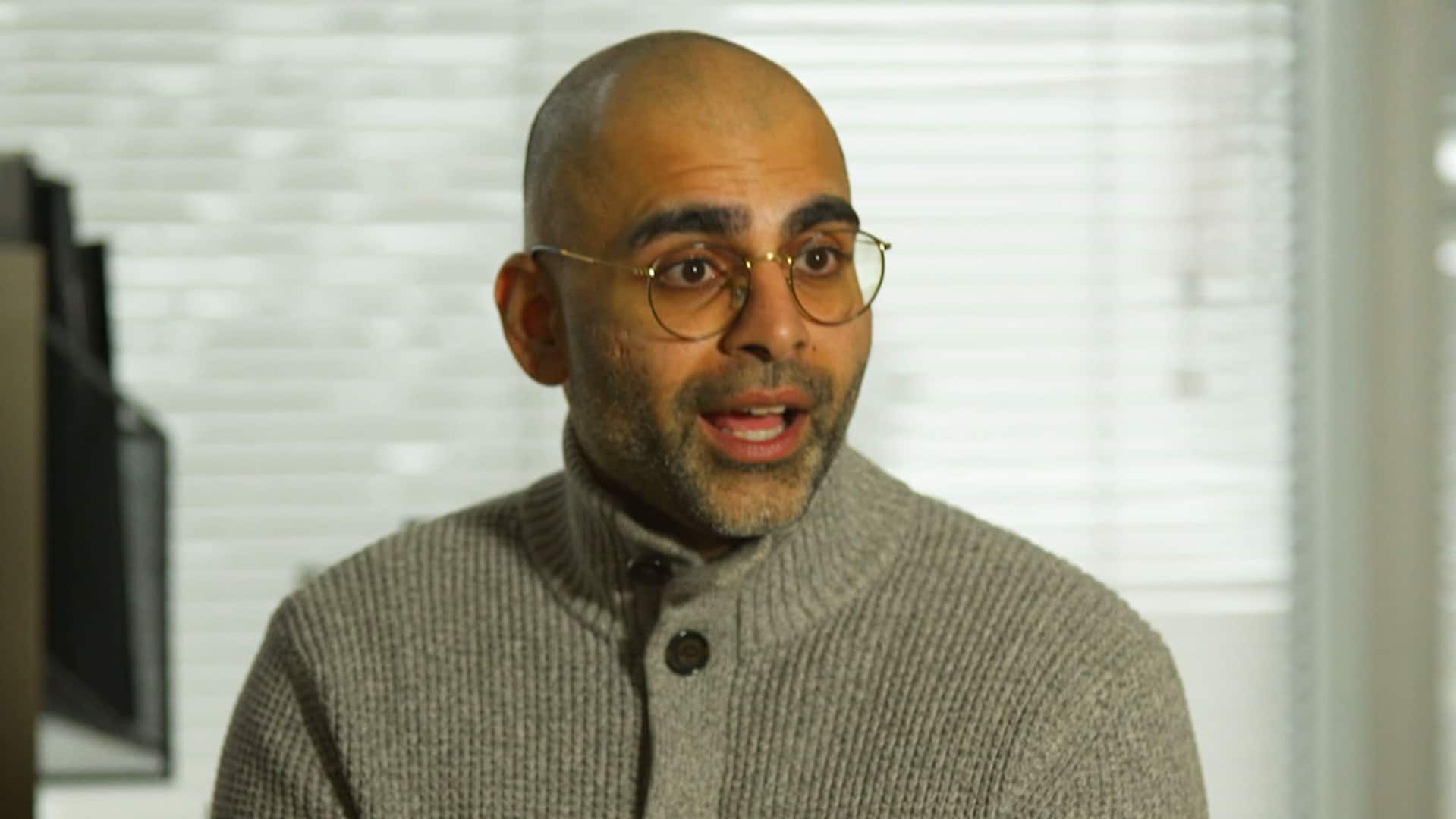 Real estate lawyer Harjot Gill advises what to do before purchasing a home so you aren’t surprised to learn HVAC or other equipment is rented, not owned. 1:00

Gill says it’s the responsibility of the seller to disclose if an appliance is rented, but sometimes people forget. He says that’s why it’s important for real estate agents to question their clients, and for homebuyers to ask questions too, and to keep a record of it.

“I always tell a lot of my clients to keep their correspondence through writing,” said Gill.

He said if you are spending money on a home, you should pay a lawyer to pull the title to make sure there are no liens, and have them look at the sales contract.

“There are solutions … speak to your lawyer or get your realtor to dig deeper,” Gill said.  “I know it’s a crazy market, but you know, at the end of the day, you don’t want to be stuck with a lemon basically, right?”