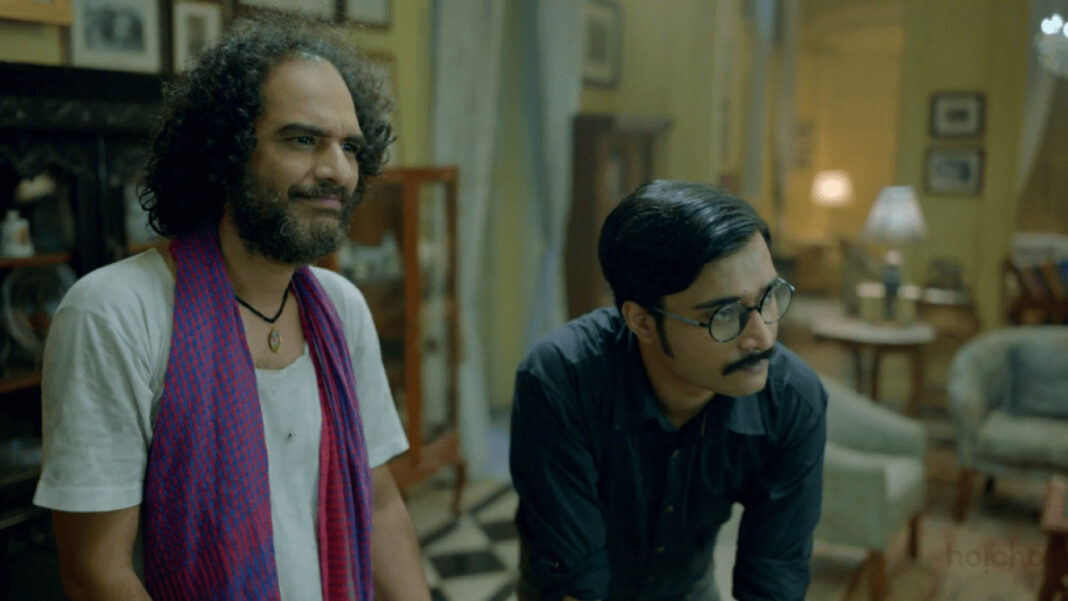 Some people are begging to be skewered like lamb shanks over hot flames. At least that’s director Mark Mylod’s take in his dark comedy The Menu, which takes aim at the nouveau riche, particularly those with expensive epicurean tastes. Actually, the film targets several tiers of douchery, not just the foodies: tech-bros, pompous celebrities, professional critics (yikes), high-end investors, and spoiled ivy league brats who don’t know what a student loan is, are all thrown on the spit. In one grisly evening, these pantheons of mediocrity will be served a meal they’ll never forget.

The movie opens with twelve diners boarding a ferry that will take them to Hawthorne, an exclusive restaurant located on a private island. Each customer has paid $1,250 to savor the gourmet delights of celebrity Chef Slowik (Ralph Fiennes), whose reputation as a true culinary artist is only exceeded by his anonymity. He’s like Howard Hughes with an apron.

Our entrance into this gastronomic universe is through the doe-eyes of Margot (Anya Taylor-Joy), the last minute-date to food elitist and man-child, Tyler (Nicolas Hoult). While Margot seems blasé about the whole affair, Tyler can’t stop fidgeting since he’s about to meet one of his heroes in Slowik; you’d think he was meeting Keith Richards. Other guests include a washed-up movie star (John Leguizamo) and his petulant assistant (Aimee Carrero); a simpering food writer (Janet McTeer), whose malicious reviews have murdered multiple culinary careers; a trio of technology whiz kids who think they’re on Spring Break (Rob Yang, Mark St. Cyr and Arturo Castro); and Hawthorne regulars (Judith Light and Reed Birney). When they land on the 12-acre island, the diners are met by the head of staff and Slowik’s assistant (a frightening Hong Chau). She gives them a tour of the island’s natural beauty, which provides the restaurant with its organic ingredients, not to mention a small barracks where the staff sleep on cots like soldiers going to war. These people take food seriously.

The bulk of the film takes place in Hawthorne’s dining room; a sleek, wood-paneled dining room that’s connected to the open kitchen where the patrons can clearly see the staff work with robotic precision.  After they sit down for the tasting, Slowik enters the domain with the air of a dictator… or a serial killer. “Slowik is not just a chef,” Tyler gushes, “He’s a storyteller.” And so he is. With a sinister, deliberate drawl, Slovik introduces each course with a backstory from his childhood that’s straight out of Grimm’s Fairytales. Food is not to be eaten, he insists, it’s to be “savored.” If anyone interrupts these monologues, he glowers at them with frosty contempt. Fiennes hits all the right notes playing Slovik with a calculated madness that’s both hilarious and unnerving.

Taylor-Joy is equally hypnotic as Margot, the only customer who doesn’t buy into the affected pageantry of the place. She just wants some real food, not the dabs of fish eggs, and leaves they keep bringing her. With her expressive gaze, she’s a perfect avatar for the audience as she reacts with a droll skepticism to all the posh nonsense. She induces the movie’s biggest laughs when she guffaws at terms like “mouth feel,”  and reacts to her fellow patrons’ mannerisms, or simply glares back at Slovik when he follows her to the restroom and asks what she’s doing there– she’s not a part of the menu.

The first act is a masterstroke in pacing, comedy, and suspense. Mylod and screenwriters Seth Reiss and Will Tracy ratchet up the tension while inducing some uncomfortable chuckles. Each time Slowik claps his hands and serves a new course, the pressure in the room escalates as the diners’ reactions grow in confusion. It’s a beautiful ballet of dark humor and anxiety.

But once the secret is revealed and the tension breaks, the movie starts to fall apart. What started as a provocative satire with some interesting ideas regarding narcissism and societal hypocrisy devolves into a series of horror cliches. Instead of embellishing the Battle Royale aspects of the movie in which several players attempt to escape the island, the filmmakers could’ve focused on the story’s Agatha Christie-like qualities. The satire lies in the characters and the reason they’re there in the first place, not knife fights and action sequences.

The movie serves a fantastic appetizer but it leaves you hungering for more, even when it delivers wonderfully macabre moments and tops them with a surprisingly nihilistic ending. There’s also a memorable scene featuring the most mouth-watering cheeseburger in the history of cinema (this critic rushed to In-N-Out the minute the credits started rolling). Even if the film’s social commentary and satirical edge feel like a badly-tossed salad of ideas, it’s controlled directing, quick pacing, and fantastic performances provide some flavorful textures and cinematic bites.