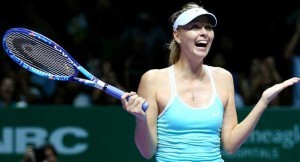 Tennis stars Maria Sharapova, Madison Keys and Lucas Pouille were in Paris on Tuesday (May 23) for a photocall, just days before the French Open begins.

Russian Sharapova was snubbed by organisers of the tournament who refused to give her a wild card. She was nonetheless in the French capital as part of a marketing event for Evian mineral water along with 22-year-old U.S. star Keys and 23-year-old Frenchman Pouille.

Keys, who is ranked 13th in the world, told Reuters she was excited about playing her first grand slam of the season after missing the Australian Open due to wrist surgery.

France said it was heightening security at sports and cultural events on Tuesday, including at the Roland Garros tennis stadium, in light of an attack at a British concert hall which left 22 people dead.

Pouille, who is the third-ranked French male player after Jo-Wilfried Tsonga and Gael Montils, said he expected the atmosphere at the French Open to be “tense” in light of the attack.

The 2016 singles quarterfinalist at Wimbledon and the U.S. open said he had recovered from a foot injury which affected him in the Australian Open. He told Reuters he felt pressure playing in a French tournament which has not been won by a French man for over three decades.

Organisers of the Evian event declined Reuters’ request to interview Sharapova, who won the French Open in 2012 and 2014 but was hit with a 15-month doping ban last year.