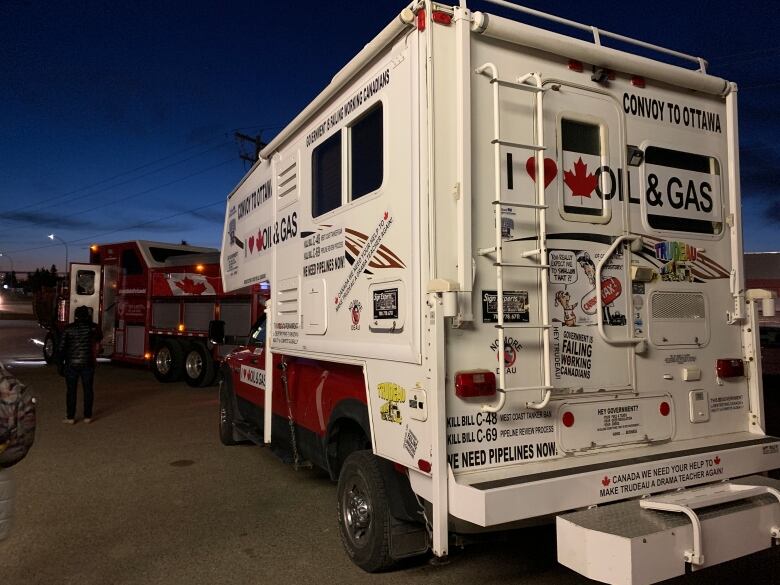 Vehicles carrying both climate strikers and oil and gas supporters have begun the journey north to Edmonton Friday morning, all headed for the same destination: a massive rally at the Alberta legislature which will be attended by 16-year-old activist Greta Thunberg.

Two buses were filled with about 100 Calgarians who plan to join a crowd of climate strikers that is expected to draw more than 1,000 people.

Meanwhile, about two dozen vehicles carrying oil and gas supporters, departed from a truck wash in Red Deer, Alta., at about 7 a.m.

The group United We Roll, which organized a pro-pipeline convoy to Ottawa in February, plans to stage a counter-rally, saying that its members are frustrated with celebrities visiting the province and telling Albertans how to run their business.

For Priya Migneault, a 15-year-old who joined the Calgarians coming by bus to Edmonton, the planned counter-protest made it even more important for Thunberg to have supporters in the crowd.

“I really just want her to feel supported in Alberta and I want her to feel welcome,” said Migneault, who is an organizer with the group Fridays for Future YYC. “I definitely don’t think they [the United We Roll group] are the enemy, I think they’re just expressing their opinion.

“I just don’t want Greta to feel like she’s alone in her fight for climate action in Alberta.”

Some of the young passengers on the bus with her were using the three-hour journey to make crafts and signs to use at the protest.

Rally supporters will be gathering at Beaver Hills House Park, 10440 Jasper Ave., at about 11 a.m., then marching west on Jasper Avenue then heading south on 107th Street to the legislature grounds.

Thunberg, the Swedish activist known for sparking climate protests across the globe, is expected to speak to the rally, which gets underway at noon MT.

Organizers say they’re excited Thunberg will appear, hoping she will use her influence to advocate for alternative energy sources in Alberta.

“I’m excited that she is coming to stand in solidarity with us, right in the heart of our country,” said Veronica Fuentes, an environmentalist with the group Beaver Hills Warriors.

“I welcome her to the community, to stand with young people who share her platform, to centre all the incredible work being done in Alberta and in Indigenous communities,” she said.

Organizer Olivier Adkin-Kaya said the intention is to advocate for a transition away from fossil fuels.

“To the oil workers … we’re not your enemy. What we’re pushing for is not for a bunch of people to lose their jobs,” he said.

“We’re pushing for a just transition, which means we want to guarantee income security to all the oil workers and we don’t want to leave anyone behind.”

Edmonton Police Service said they will be treating the rally as any other major city event and a police presence will be at the legislature.

“The presence of Ms.Thunberg does not change the EPS’ priorities,” a police statement said.

“Traffic congestion in the downtown core is expected to be significant during the rally and protest. The EPS suggests that citizens be mindful of this and make plans to take other routes.”

The City of Edmonton also said it’s making preparations for the climate march. It’s advising drivers to take an alternative route other than Jasper Ave.