‘Such results have ramifications’ – what next for Barca and Enrique after PSG thrashing? 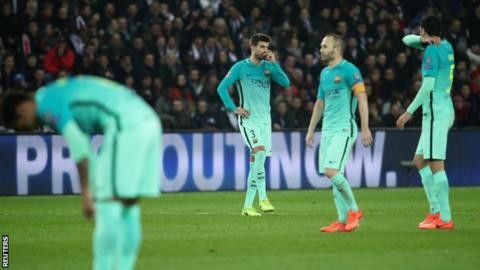 Barcelona are on the verge of failing to reach the Champions League quarter-finals for the first time since 2007 after a humiliating 4-0 thrashing at Paris St-Germain, and the manner of the defeat has sent shockwaves through Spain.

As well as PSG played, the majority of the post-mortem is focussing on just how bad Barca were, with their players and especially manager Luis Enrique facing intense criticism.

The game’s stats speak for themselves: PSG had 10 shots on target against just one from Barca, with the French team also collectively covering far more ground (112.1km against 104km) and working harder to win back the ball (46 recoveries against Barca’s 36).

Even Lionel Messi, so often his team’s saviour, was powerless to intervene, failing to touch the ball inside the PSG penalty box once.

For a club which has such expectations of success, such awful performances do not pass by without ramifications. The tie might be effectively over, but the storm has only just started.

What went wrong for Barca?

Everything. They were outworked in midfield, overrun in defence, and the superstar forward line of Messi, Luis Suarez and Neymar had virtually no impact, although the Brazilian at least made a handful of dangerous runs.

From a tactical point of view, the first of those points is the most significant, because PSG’s outstanding midfield trio of Marco Verratti, Adrien Rabiot and Blaise Matuidi completely controlled the centre of the field and the flow of the game.

Their dominance was plainly evident in the second, third and fourth goals, all of which saw PSG players breeze unchallenged through the heart of midfield, with no opponents putting any pressure on the ball whatsoever, before calmly delivering passes for Julian Draxler, Angel di Maria and Edinson Cavani to convert.

Indeed, it could have been even worse, with Barca keeper Marc-Andre ter Stegen the only visiting player to emerge with any credit after making some decent saves to repel similarly rampaging PSG attacks as his defence offered next to no protection.

A team like Barca repeatedly being so easily carved open was a shocking sight, and the disconnect between their defence and attack – with nothing in between as PSG enjoyed the Parc des Princes’ wide open spaces – was the main factor behind the vast gulf between the teams.

Had anyone seen this coming?

Of course, nobody was predicting that Barca would lose so heavily in Paris.

But although the scale of the defeat was unexpected, many fans are now bitterly saying “I told you so” after a season which has regularly threatened to fall apart at the seams.

Despite the success he enjoyed during his first two seasons in charge, many observers have remained unconvinced by Luis Enrique’s abilities as a coach, claiming that his only tactical plan is to let Messi do what he wants and hope for the best.

That is an exaggeration, of course, but the fact Enrique did not even use all his available substitutions in Paris despite a horrendous collective performance suggests he is desperately lacking a back-up if his Plan A – relying upon the MSN forward line – fails to prosper.

Although they possess enough individual talent to brush aside inferior opposition, throughout the season Barca have routinely struggled whenever they come up against top-quality teams – with the 3-1 group-stage defeat at Manchester City offering just one example.

Barca were also poor in last week’s Copa del Rey semi-final against Atletico Madrid, only sneaking through after Atletico missed several clear chances (including a penalty) and had a goal wrongly disallowed, and the Catalans have dropped points in La Liga against Real Madrid, Atletico, Real Sociedad and Villarreal.

Indeed, the only team in La Liga’s top six they have beaten so far this season is Sevilla, and that was only thanks to a remarkable performance from Messi – the prototype Enrique win, according to his many detractors.

How did the Spanish media react?

Although the players have not escaped criticism, manager Luis Enrique has been well and truly placed in the firing line.

The Barca boss conducted a particularly feisty post-match interview with Catalan broadcaster TV3, firing back “You can tell you didn’t watch the game” after it was suggested he had not made any tactical changes during the course of the match.

There were even suggestions that Enrique was later restrained from accosting the reporter, Jordi Grau, because he was so upset by the negative tone of the interview.

If that was the case, Enrique will be awfully unhappy with a lot of members of the media because he has faced widespread and fierce criticism.

An opinion piece in Sport, a newspaper published in Barcelona, described the team as “shipwrecked without a manager”, handing Enrique possibly the worst insult imaginable in that particular city by likening him to Jose Mourinho in his treatment of the media (“inventing enemies which don’t exist”).

And naturally, Spain’s pro-Real Madrid publications were more than happy to stick the knife in, with Marca describing the game as a “catastrophe” and calling it Barca’s “biggest debacle of the 21st century”,

Is this the beginning of the end for Enrique?

Luis Enrique will probably leave the Nou Camp at the end of the season – and not just because of this result.

The former Spain international has never really looked like he enjoys many aspects of his job, regularly stating he does not envisage staying in charge for very long because of the relentless pressures of the position.

He is out of contract at the end of the season, and has always been extremely evasive over whether he intends to sign a new one (although he is evasive about most things, so that is no surprise).

Whether or not he really intends to agree a new contract is a genuine secret – he even kept Barca hanging after winning the treble in 2015 – but now he will probably end up having little choice.

Barca are also adrift in La Liga, with Real Madrid one point ahead and boasting two games in hand, and although they have reached the Spanish cup final, that is unlikely to be enough to keep Enrique in charge – especially considering the nature of what now seems an almost certain Champions League exit.

Results are not the only thing that matter at Barcelona, though, and Enrique is regularly accused of dismantling the possession-based style of play which was initially instilled by Johan Cruyff and later continued by Frank Rijkaard and Pep Guardiola, instead imposing an unattractive and disjointed style which bypasses midfield and relies exclusively on the talents of three players.

The combination of poor results and unpopular playing methods will be tough to survive.

Who would replace Enrique?

With Enrique’s future uncertain, several possible replacements have been touted in the last few weeks.

For many fans, the most popular option would be Jorge Sampaoli, the fashionable Argentine coach who has taken La Liga by storm in leading Sevilla’s unlikely title challenge with a daring and versatile tactical approach.

The passionate and intense Sampaoli is rapidly becoming the most highly-rated emerging coach in the world, and Sevilla is unlikely to be a big enough stage for him.

Other candidates are current assistant Juan Carlos Unzue, Borussia Dortmund’s Thomas Tuchel, PSG’s Unai Emery and Real Sociedad boss Eusebio Sacristan, who has the benefit of being an insider after playing for the club and – like Enrique and Guardiola – previously managing the B team.

In the long run, probably the best bet to bring the “Barca DNA” back to the Nou Camp is the man whose playing career best embodied that style: Xavi. But this summer is almost certainly too soon for the legendary midfielder, who is still playing for Al Sadd in Qatar.

Next time, the job might be his, but for now Barca’s board will have to choose between the increasingly unlikely option of keeping Enrique, or taking the plunge for a new man.

Does the squad need an overhaul?

No. Their performance on Tuesday may have been abysmal, but do not forget these are largely the same players who won the treble two seasons ago and the double last year.

Some positions do require reinforcements, especially right-back where last summer’s departure of long-serving Dani Alves is being keenly felt.

In the longer term, a major issue will be filling the gap left by Andres Iniesta, who is nearly 33 years old. As with Xavi, directly replacing such a unique player will be practically impossible, but current squad members Andre Gomes, Denis Suarez and Rafinha have not yet convinced.

Nevertheless, Barca’s squad remains stacked with players of the highest quality, and the continuity of the front three of Messi, Suarez and Neymar is particularly unlikely to be questioned.

The bigger question is not whether the players are good enough, but how to get the most out of them. Several are significantly under-performing, with midfielders Sergio Busquets and Ivan Rakitic – both undoubtedly world-class players – probably enduring the worst seasons of their careers.

And, indeed, their struggles can be seen as indicative of a team which possesses brilliant individuals but lacks a solid collective structure, something which critics are laying firmly at the feet of Enrique.

Before long, somebody else may well have a chance to put that right.