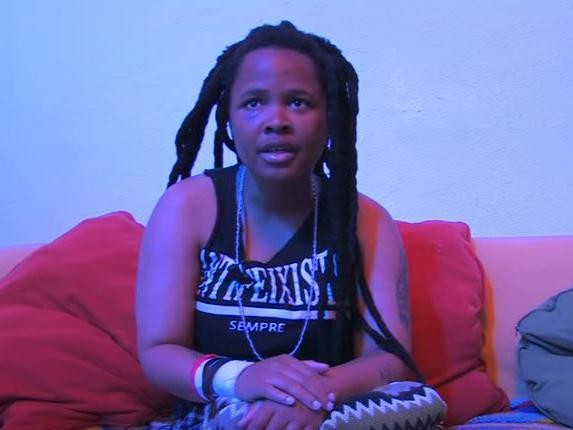 Nkumbi was in Amsterdam with some of her colleagues to attend the opening of an exhibition by photographer Zanele Muholi.

The suspect is the landlord at the Airbnb address she and her friends were staying. They were scheduled to check out of the apartment at 11am but were still there after 12pm.

In a video posted on Instagram by her Zanele, Nkumbi fell off the stairs during as the man dragged her out of the house.

In an interview after the incident, she said that no one was arguing with the landlord but were trying to reason with him, adding that they were already leaving the apartment.

She said he was verbally aggressive and that the attack was racially-motivated.

She said she had apologised at the time for staying an hour over the check-out time.

Nkumbi said he referred to their group as “you people” and said “You need to leave now, this is not Africa”.

“When I got close, he couldn’t resist the opportunity to grab me. And the way he grabbed me, I knew he was going to throw me down there. I lost grip of the wall and that is when I flew down,” she said.

Nkumbi, who is studying in Bern, Switzerland, suffered a concussion, bump on the head and various bruises.

According to News24, spokesperson of Netherland’s Public Prosecution service Evert Boerstra said the man was suspected of “poging doodslag“, or attempted manslaughter.

Boerstra said the case is still under investigation, adding that the suspect was released on Sunday. The incident occurred on Saturday, July 8.

Appalling and unconscionable behaviour against members of our community runs counter to everything Airbnb stands for. Our CEO Brian Chesky and I are reaching out to the affected guests.

We will take the strongest actions we can against such abhorrent conduct, including banning people for life from our platform and assisting law enforcement with their investigation and potential prosecution. Nobody should ever be treated like this and it will not be tolerated.