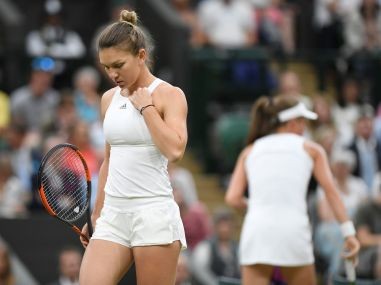 Johanna Konta became the first British woman to reach the Wimbledon semifinals for 39 years on Tuesday, while five-time champion Venus Williams also made history as the oldest semifinalist since 1994.

Williams had her own landmark moment on Centre Court with a 6-3, 7-5 win over French Open champion Jelena Ostapenko that made her the oldest semifinalist at the All England Club since Martina Navratilova 23 years ago.

Halep’s defeat means Czech Karolina Pliskova, who lost in the Wimbledon second round, will replace Angelique Kerber on top of the WTA rankings.

Konta, 26, is the first Briton since Virginia Wade in 1978 to make the women’s semifinals.

Wade, the last British woman to win Wimbledon in 1977, was watching from the Royal Box as Konta reached the second Grand Slam semifinal of her career, the other ending in a 2016 Australian Open defeat against Kerber.

“I knew Simona was not going to give me much for free. I had to be the one to create my own chances. I feel fortunate enough that I took a few of them.”

Born in Australia to Hungarian parents, Konta didn’t move to England until she was 14, switching her allegiance from the country of her birth to Britain when she gained citizenship in 2012.

Adapting to the grass courts of south-west London hadn’t been so easy for Konta, who won just one match in her previous five visits to Wimbledon.

Those failures will seem a lifetime ago to Konta now.

If she wins Wimbledon it will be the first grass-court title of her career, coming just two weeks after she feared her participation in the tournament might be ruined by a back injury suffered in the Eastbourne warm-up event.

Standing in Konta’s way is world number 11 Williams, who was beaten in this year’s Australian Open final and is chasing a first major title since winning Wimbledon in 2008.

Williams, who reached the last of her eight Wimbledon finals in 2009, has now equalled her sister Serena’s total of 86 main draw match victories at Wimbledon, the most among any active player.

“I love this game. That’s why I put in the effort and the time. It’s a beautiful game. It’s been so good to me,” said Venus, who is bidding to break Serena’s record as Wimbledon’s oldest champion in the Open era.

“The competition keeps you growing. You have to get better if you want to stay relevent. I love the challenge.”

Having stunned the tennis world by becoming the first unseeded player to win the French Open last month, Ostapenko was riding an 11-match winning streak at the majors.

But the 20-year-old was the youngest player left in the tournament and Venus has scythed through the draw by dispatching a series of opponents almost half her age.

Twenty years after making her Wimbledon debut, Venus was playing in her 100th singles match at the All England Club, while Ostapenko was in only her eighth.

That gulf in experience was apparent as Venus cruised through in serene fashion.

Garbine Muguruza powered into her second Wimbledon semifinal in the last three years with a 6-3, 6-4 win over Russian seventh seed Kuznetsova.

Since winning her maiden Grand Slam title at the French Open last year, Muguruza has struggled to return to the top and this is her first major semifinal since that Roland Garros triumph.

“I played good. I’m trying not to think a lot, just go for it and play my game. I’m happy it worked out,” Muguruza said.

The 28-year-old, who had lost in the first round in eight of her previous nine visits to Wimbledon, said: “I would never ever believe I could be in the semifinal before this tournament.