Actress Allison Mack, best known for her role as Clark Kent’s clever confidant Chloe on CW’s “Smallville,” was indicted on Friday on charges of sex trafficking, sex trafficking conspiracy and forced labor conspiracy, according to a statement released by the Justice Department.

Mack’s arrest is related to her alleged involvement with an organization called Nxivm (pronounced NEX-ium), a group that claimed to be a self-help program but was, in reality, a pyramid scheme in which some recruits were exploited “both sexually and for their labor, to the defendants’ benefit,” according to U.S attorney Richard P. Donoghue.
Nxivm’s founder, Keith Raniere, also known within the group as Vanguard, was also indicted on Friday.
“As alleged in the indictment, Allison Mack recruited women to join what was purported to be a female mentorship group that was, in fact, created and led by Keith Raniere,” Donoghue stated.
A representative for the actress had no comment on her arrest.
John Marzulli with the U.S. Attorney’s office confirmed to CNN that Mack entered a not guilty plea.
Raniere will be arraigned on a date that is still to be determined.
A statement posted on the homepage for the Nxivm website says the group is “working with the authorities to demonstrate [Raniere’s] innocence and true character.”
“We strongly believe the justice system will prevail in bringing the truth to light,” the statement reads.

Officials allege that Nxivm, based in Albany, New York, encourages recruits to pay thousands of dollars for courses to rise through the ranks of the organization and recruit others to do the same.
Officials say Mack, 35, is the co-creator of a program within Nxivm called The Source, which was targeted toward actors.
Mack and Raniere’s charges stem from what officials say were activities that took place as part of a secret society within Nxivm called “DOS,” in which women recruited others under false pretenses to perform sexual acts. Raniere was the sole male in DOS and the leader.
Until women recruited others, they were called “slaves.” Those who successfully recruited were called “masters.”
The indictment claims many so-called slaves were branded on their pelvic areas using a cauterizing pen with a symbol which, unbeknownst to them, incorporated Raniere’s initials.
Mack is being accused by two unnamed women, identified in official documents as Jane Does 1 and 2, of directly or implicitly requiring them to engage in sexual activity with Raniere.
Mack allegedly received financial and other benefits from Raniere in exchange for the women’s cooperation with their demands.
The women claim they were blackmailed into complying, as DOS has compromising information about them.
If convicted of the crimes charged, Raniere and Mack each face mandatory minimum sentences of 15 years’ imprisonment, and up to life imprisonment.

Who is Allison Mack

Mack began acting at a young age but rose to popularity when she joined the cast of superhero series “Smallville,” which told the story of a young Clark Kent’s teen years.
The series first aired on the WB network in 2001 but became property of The CW network, after that network was created in 2006 by the merger of the WB with UPN. 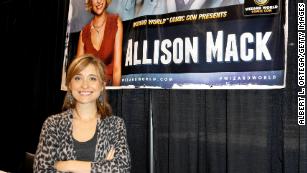 Actress Allison Mack attends Day 3 of Wizard World Chicago Comic Con 2013 held at the Donald E. Stephens Convention Center on August 11, 2013 in Rosemont, Illinois.
“Smallville,” which starred Tom Welling and Kristin Kreuk, ran for ten seasons, ending in 2011.
Though it attracted a conservatively sized audience, in its prime, “Smallville” had a passionate fan following.
Even many years after the show finished airing, cast members from the series are often paid to make appearances at various fan conventions across the country and world.
After “Smallville,” Mack had roles on FX’s “Wilfred” and NBC’s “American Odyssey.”
One of her most recent credits was a voice role in Amazon’s animated series “Lost in Oz.”
Share
Facebook
Twitter
WhatsApp
Pinterest
Linkedin
ReddIt
Email
Print
Tumblr
Telegram
Mix
VK
Digg
LINE
Viber
Naver
Previous articleMichael Jackson’s famous moonwalk shoes are going up for auction
Next articleBeyoncé reigns at Coachella once again