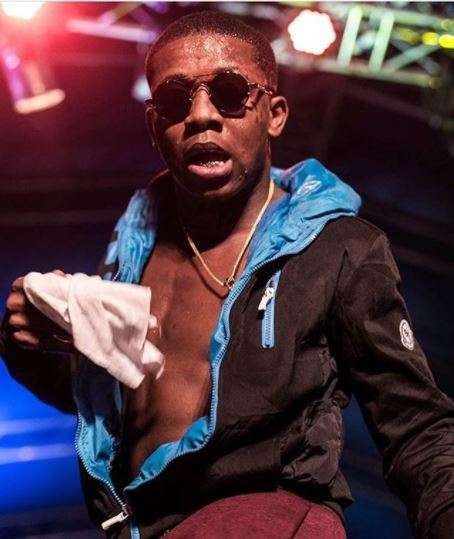 Small Doctor has been called out by a friend for attempting to murder him by poisoning his drink.

Drama never seizes to end in the world of celebrities as Small Doctor has been accused of allegedly attempting to murder a friend by poisoning.

Now the gist is that a South African friend of Small Doctor, Jurjiversal who is said to be an artist too has revealed how Small Doctor and a friend attempted to poison him with a glass of drink while on his visit to Nigeria.

Jurjiversal took to his Instagram page on Thursday, March 22, 2018, where he posted quite a long post on how he escaped death twice in the hands of Small doctor and another friend.

“I’ve been praying against enemy within while I never knew they are the same sets of people. I wine and dine with, I never knew you’ve been working on my map way before I land in Naija, All I show you was love but all you wish me is death, You already making name for yourself in the industry but still you’ve been having sleepless night on how to blackmail and get me killed all long while I’ve been overseas watching Nat geo wild, I can still remember the statement you made at Unlimited studio few years back that any of your friends that plans to do music and make it big will automatically turn to your no1 enemy,

“Right from day one I’ve never seen you as a competition and all I always wish you is success but I never knew all you wish for me is death because of the envy and jealousy in you and you not wanting to see another man around you shine. The last time you came to SA for a show, I was the one who drove you in my Mercedes from your Morning side Hotel to your show in Centurion, 2 weeks before I came to Naija you chatted me up which I later called you on phone then you asked me when I’ll be back in Naija I told u I should be back in a week to 2 weeks’ time, the first question you asked me was what am coming to do! You don’t even want me to come back home.

“On eventually getting to Naija, I sent you messages to let you know I’m around but the anger in the way you responded to the Dm(s) is so obvious, Aside that I called u several times and I also contacted one of our friend Ebay to reach you on my behalf but you ignored all my calls which I thought maybe you’re busy in studio or something not knowing both of you are into this together, Since then you’ve been trying everything to avoid seeing me, playing dirty pranks and plotting your evil to the extent that you set people around my hotel to take pictures and make videos of all my activities and moments so bad to the fact that whenever I’m chilling with my so called friend Ebay in his area and I ask him like where can I ease myself he will point to a spot which I can use which I never knew someone is there already to capture me while am easing myself for real?

“I was out one day with I was out one day with this my same nigga when he told me that small doctor said we should come block him at my mama house, on getting there, Small doctor sat on his car bonnet, he stand up and walk towards my mama saying “Mama Jurji ama ri eni ti o ma ko ko se o rire ninu emi ati omo yin” like he will see who will succeed first among him and I repeatedly saying it aloud. I didn’t even say a word because I thought he was just being playful because of the mind I’ve got for him but and I never knew he meant everything he said that faithful day.

play Jurjiversal, the artist accusing Small Doctor of attempting to poison him

“You guys made several attempts on my life but God was just merciful, from the day ebay gave me a poisoned Hennessy at small doctor’s house to drink to the day you maneuvered dangerously at high speed between two big moving trucks in an attempt to crash side of the car which I was sitting at against the truck. I already know all your evil plans against me which is fueled by envy and hatred but you have failed which still inspired me to write a song and am dropping that song in the next 48 hours ‘1000 Friends to foe’. So you can start posting the photos and videos you captured secretly. You may think you can just do shits like that and go scot free nah believe me, I’m just taking my time. You all will get tired I put that on the Bible,” he wrote.

As at the time of this publication Small Doctor hasn’t commented on this disturbing allegation. Pulse couldn’t get through to Small Doctor and his management for comments. We promise to keep you updated on this gist.