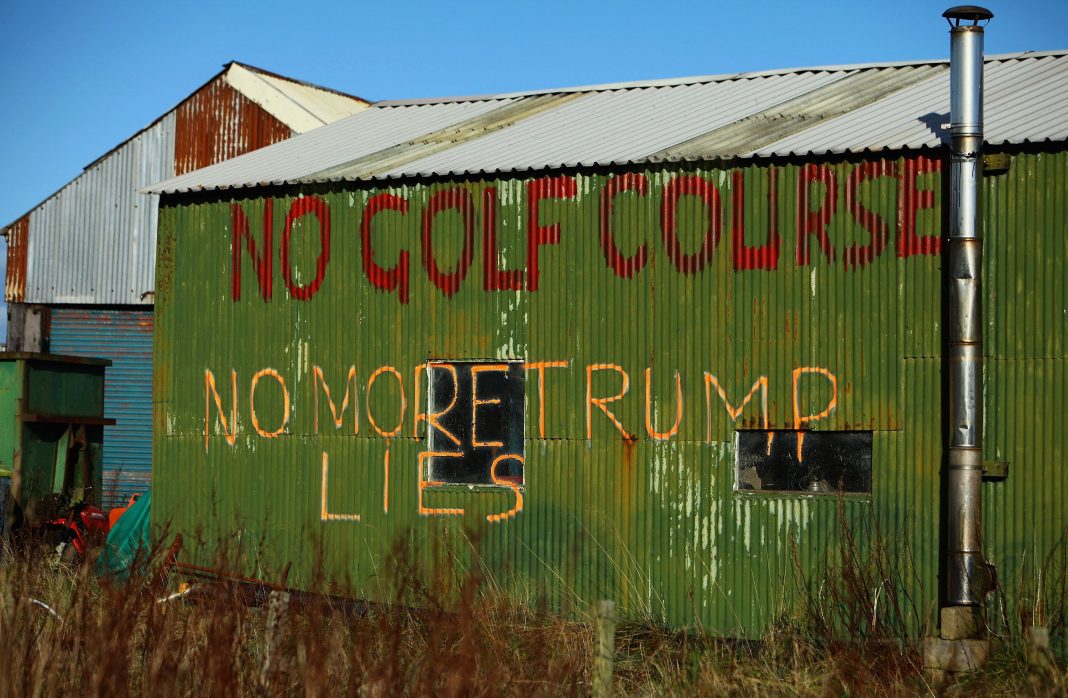 Environmentally critical coastal dunes on Donald Trump’s Scottish golf course in Aberdeenshire have been ruined, even though Trump promised to protect them.

The dunes “will be there forever,” Trump vowed in 2008 to quell concerns about his new course. “This will be environmentally better after [the course] is built than it is before.”

But late last year, officials announced that the dunes had lost their status as a protected environmental site because they had been partially destroyed.

Following the construction of the Trump International Golf Links north of Aberdeen, the dunes no longer “merit being retained as part of the site of special scientific interest,” declared Scotland’s nature agency NatureScot.

“There is now no longer a reason to protect the dunes … as they do not include enough of the special, natural features for which they were designated,” said the agency.

The drastic change was already vividly apparent in overhead photos of the Foveran Links dunes in 2019 (see clip above).

It’s even more dramatic in before and after photos of the dunes from 2010 and 2021 obtained by Business Insider that can be seen here.

NatureScot once called the dunes “a very high-quality example of a dune system characteristic of northeast Scotland, and was of exceptional importance for the wide variety of coastal landforms and processes.”

When the dunes lost their special designation, Bob Ward, the policy and communications director at the London School of Economics Climate Change Research Institute, told The Guardian: “This is a bitterly disappointing decision, which shows that golf still trumps the environment when it comes to Scotland’s natural heritage.”

Trump claimed he would “stabilize” the dunes, which meant building on them. But that stopped the natural movement of the dunes as they respond to environmental fluctuations, Ward told Business Insider. “Essentially, what they’ve done is they’ve just killed it as a natural environment,” he said.

Trump’s vow that his Aberdeenshire course and a second one at Turnberry would bring welcome economic benefits to the area has also fallen flat.

The filings covering 2019 didn’t yet reflect the business-downturn toll of the COVID-19 pandemic.

Despite the losses, the Trump Organization has reported massive outlays at the properties over the years. According to the latest filing, it also has won approval to build a 500-unit housing development at the cost of $185 million after the club in Aberdeenshire, which is intended to pursue.

The resort losses are so astronomical that the operations have raised suspicions of money laundering. Those suspicions have landed the courses at the center of an ongoing Scottish legal battle.

Global activist organization Avaaz has filed a court action to press the Scottish government to wield its popularly known “McMafia” law to force Trump to reveal the mysterious sources for his all-cash purchases and development of his Scottish golf resorts. At Trump’s purchases, he was heavily in debt, and banks were reluctant to loan money to him.

Accounting for the president’s Scottish resorts is unusual because Trump is the creditor for his businesses, which means payment for many of the resorts’ costs flows to the Trump Organization.

The circular flow of money in the Trump companies provides an opportunity for money laundering, The New Yorker business writer Adam Davidson has suggested. He called the resorts “money disappearing” operations.

Trump “owns the asset, lends the money, owes the money, is owed the money,” Davidson explained. “Every year, Trump lends millions to himself, spends all that money on something, and claims the asset is worth all the money he spent.”