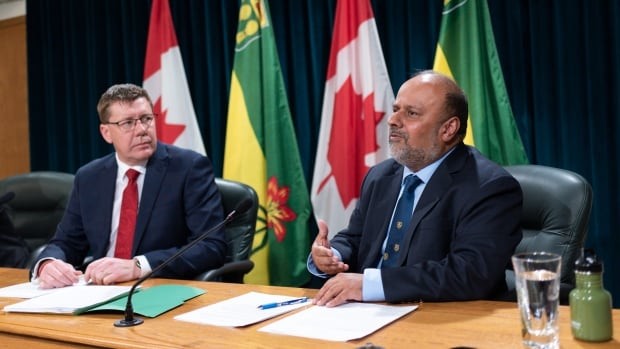 Saskatchewan Premier Scott Moe condemned what he called a “misguided protest” outside the Regina home of the province’s chief medical officer of health.

Moe said Dr. Saqib Shahab has worked tirelessly to protect the province’s residents throughout the pandemic and should not be subjected to harassment from a “group of idiots.”

In a written statement released late Saturday, he said those who disagree with his government’s decisions should take their issues up with him or a local legislator rather than going after a “dedicated public servant and his family.”

Moe said the Regina Police Service and the RCMP are both involved to make sure Shahab and his family are safe.

He said the government is looking into long-term security options to protect Shahab and his relatives, and that he’s encouraged the police forces to investigate any potential criminality in the protest.

A spokesperson for Moe declined to say what security options are being considered. But Jim Billington said Shahab and his family were not harmed during the protest.

Regina police did not immediately respond to a request for comment.

Moe previously came to Shahab’s defence after he said a speaker at a rally outside the provincial legislature made racist comments about the top doctor in December.

He described the speaker’s comments as “beneath contempt.”

Now, Moe says he has a message for those who are taking aim at Shahab.

“This harassment of Dr. Shahab and his family at their home is simply unacceptable, sickening and wrong,” he said. “To those that did this — you should be ashamed of yourselves and your actions.”