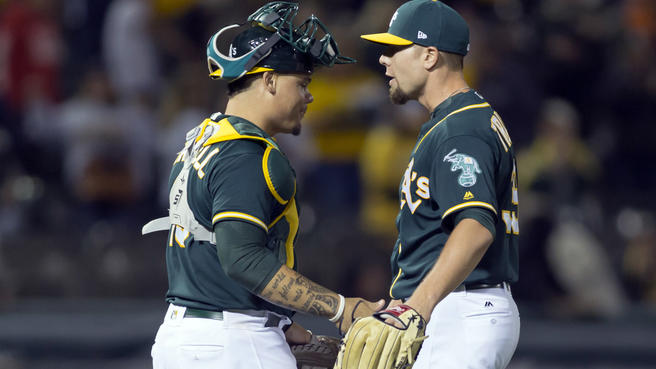 The Athletics, from Philadelphia to Oakland, have a rich history of nicknames. Longtime skipper and owner Cornelius McGillicuddy mercifully went by Connie Mack, and he managed such players as Home Run Baker, Chief Bender, Lefty Grove, and Rube Waddell, not to mention Jimmie “Double X” Foxx. It was a simpler time.

As the years went on and the team moved to Kansas City and then Oakland, the fun monikers continued. Most non-A’s fans probably can’t tell you Catfish Hunter’s real name, and even many A’s fans might not know Blue Moon Odom’s. Others, like Campy and Rollie, at least had particularly fun abbreviations for theirs, as did the next generation like Hendu, Stew, Eck, and Big Mac. We even got a turn with the Big Hurt, one of my all-time favorites. Most recently we enjoyed Coco Crisp, La Potencia, the Bringer of Rain, and the Everything Bagel.

Oh, we also get credit for musical artist MC Hammer, so-named by Reggie Jackson while Stanley Burrell worked for the club. We’ve also got one of the best real names ever in Vida Blue.

And that brings us to 2017. MLB is doing a special Players Weekend promotion from Aug. 25-27, allowing players to “let their personalities and passions shine.” Teams will wear “colorful, non-traditional uniforms” which, among other things, will feature nicknames on the backs instead of real names. Merchandising! But I’ll bite, because the nickname thing sounds fun.

(One more cool twist: Players get a patch on their right sleeve on which they can pay tribute to someone who helped them along the way to reach their dreams. OK, back to the nicknames.)

Here’s a full rundown of everyone.

Excluding those with no nickname: Mateo, Mengden, Montas, Nunez, Wendle

We have a list of things. Let’s rank them! Of course, important caveat: These nicknames are by the players, for the players, and we may not necessarily get all of them. Some are probably inside jokes that we’ll never understand, and that’s fine, live your best life fellas. But the downside is that if we don’t get it then it won’t rank highly on our super important list.

All that said, as time goes on, I reserve the right to update these rankings if I learn of any explanations that change my opinions on them. (Like, a name I thought was weird or dumb turns out to be the thing his grandpa called him when he was growing up, or it’s what they call him at the charity where he volunteers, and now it seems sweet and awesome. Or something like that.)

These guys aren’t using a nickname at all, so they’re at the bottom of the list by default with a grade of incomplete. Really, though, only the first three on that list are actually on the team right now and there’s no guarantee any one of them will be here the weekend of the promotion (not saying they won’t, just saying they aren’t locked into spots).

These are simply abbreviations of the players’ names, or initials, or the full name with a Y on the end, or the first name instead of the last. They aren’t all bad choices, per se, and in some cases they are really the names by which they are often referred (Bruggy, Chappy, Emo, Scar, etc.). But they aren’t exactly inspired, either. This was a chance to get creative beyond the norm, like RoboChap or Healephant (have you seen his ears?).

I don’t really understand this choice for Chris Smith. I mean, I get it; it’s a baseball term, describing pitching, and he’s a pitcher. etc. But there was so much potential. An age joke, for the oldest hurler in a century to make his first MLB start. A dad joke. Something about living in a camper trailer while he was in Nashville. Start with “Mr. Smith Goes To Oakland” and then think of something shorter. He’s got a cool story and some personality as well, but instead we got a boring general baseball term.

I don’t really understand these, and without context they are hard to appreciate for the time being. Chi like the Greek letter? And is Joyce a DJ? Why isn’t Manaea using Baby Giraffe? Is it because of Brandon Belt? Is it? I have questions.

We’re back to general name play, but at least these are a bit more creative than the last batch of pure abbreviations. Coulombe has a French name, B-Lockay is a Key & Peele reference, C Bass is basically a requirement if your name fits that mold, any Goss name becomes Goose, etc. Bomel is a classic that gets used regularly in the public sphere, and kudos to Phil Pohl for quality math usage. These are generally solid enough, except for J Hood which is a bit bro-ish for my tastes.

I don’t really get these, but unlike the previous “Huh?” section they are at least fun in the meantime without explanations. Actually, we do know about Baby Prince, given by Khrush because part of Maxwell’s swing mechanics reminded him of Prince Fielder (via Jane Lee). Still zany enough to be in this category. (Update: In the comments, we lament that Casilla didn’t go with either Jairo or Garcia.)

These make me giggle. In the case of the latter, it’s also his Twitter screen name.

This actually made a couple of national rankings (which are a thing, by the way). It clocked in at No. 5 on Forbes and No. 17 on ESPN. On my list, he gets this high for embracing the trig wordplay, but a stronger math pun could have been a real swing for the fences. (Pythagorean ERA? Sine fastball?) Of course, on the other hand you don’t want to get too technical for a crowd that includes lots of pre-trig kids.

One of his main pitches, pronounced in his Australian accent. Granted, it looks like it could be the name of a lame minor league mascot, but I’m willing to overlook that because it’s also fun to say. He already has such cool first and last names that it’s hard to see the need for a nickname in everyday life, but for one weekend I like this one.

He’s the Grave Man, ya dig? The sinker specialist uses opponents’ ground balls as his shovel. This is a top-level nickname, at least a 60-grade. Digger Graveman. Just make sure to fully enunciate the first syllable.

A true classic, and an excellent year-round nickname. Sure, there’s no novelty because we already call him this all the time, and therefore it might be disappointing to see it so high on the list. But that iconic status is also why it will be awesome to see him actually wear it on his back in real games.

Yes! Someone in Oakland had to be the Player To Be Named Later, right? On the Team of Misfit Toys, where turnover is constant, many of them were the throw-in extra piece in a trade, or a minor league free agent, or a waiver pickup. Phegley himself was at best the third guy in a four-player trade package. This nickname ranked No. 1 on Forbes, No. 14 on ESPN, and in the Top 10 here at SB Nation.

And let’s be real. Coming out with a whole new set of jerseys, all of which can be purchased on the team’s site, is also a chance to make a few extra bucks. Fans might actually buy an Oakland PTBNL jersey, with Khrush being the only other one I can really see becoming popular.

What do you think of my rankings? Which nickname is your favorite?

Which A’s nickname is your favorite?