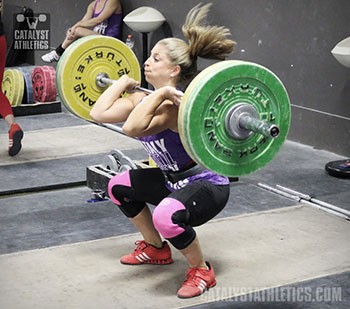 My last article was titled Quit Talking About Your Opener Like It’s The Only Lift You’re Planning to Make. This article is called Quit Thinking About Missing Your Heavy Lifts While You’re Doing Your Light Ones. I guess my personality has been reduced to a continuous series of thoughts that start with me saying KNOCK THAT S*** OFF!!

I think I come up with these ideas because I’m a coach, so I’m constantly interacting with weightlifters and watching them like an animal researcher observing two monkeys humping. And because I’m also still a competitive lifter, I connect what I see from my lifters with the things that go through my own mind, either now or back when I was younger.

Many things go through a lifter’s thoughts during a workout (or competition). People have been writing about sports psychology for ages, and it’s a subject that’s far too huge to summarize in a single article. However, there’s one particular psychological situation that’s worth a few words, because it holds a lot of people back from making progress if they can’t lick it.

We’re talking about when lifters start to doubt their ability to lift heavy maximum attempts while they’re warming up. For example, a lifter is programmed to snatch 110 kilos in a workout, but he starts getting fearful and negative about the 110 while he’s doing his 70 kg warm-ups. This usually happens because the technique feels funky, which makes the lifter think it’s only going to get worse as the weights get heavier. Basically the lifter has just started the workout, and he’s already imagining failure at the end of it.

As usual, I’ve got a story that illustrates this. I was at a National Championship back in the 90s, competing against a guy who was one of our best lifters from that era. Our warm-up platforms were right next to each other. The thing I remember most about this meet is that he hit one of his warm up snatches with a weight that was around 50-60 kilos lighter than he was planning to open with that day, and it looked pretty good to me. But after he snatched it, he sat down on a chair right next to me, looked at me and said, “Matt, I’m in trouble today.”

Now it’s not like that light warm-up snatch looked heavy or technically terrible. Honestly, it looked exactly the same as all the rest of his snatches. But despite that, he was already struggling in his head. He was starting to doubt himself, whether he was going to be able to hit the big lifts that were expected of him that day.

How did he do? Crappy. He missed his opener, made it on his 2nd, then missed his 3rd. Everything looked light. He was just all over the place technically.

Obviously there’s a reason why I used a top national lifter as the example for this kind of mental error, instead of some no-name dude from a local meet. I’m trying to show you that psychological moments of weakness aren’t just confined to rookies and lower-level athletes. Even if you’re a champion who’s operating at the pointy end of the sport, your mind can still be infiltrated by those scummy little brain gremlins that crawl into our skulls and try to make us convince ourselves that we’re gonna fail.

Does this ever happen to you? Seriously, does it? Do you ever hit a light warm-up lift imperfectly and immediately start thinking you’re going to fail with your heavy ones? The answer for many of you is YES.

So… first of all, let me assure you this doesn’t make you a coward or mental weakling. It’s normal weightlifting stuff, and we’ve all dealt with it. However, it’s a problem, and if you want to really master this sport, you have to beat it.

How do you beat it? How do you develop the kind of mental composure that keeps freakouts like this down to the bare minimum and allows you to move forward as a weightlifter? I think experience is the answer. One of the things you develop when you’ve been lifting for a long time is the ability to simply not panic when things aren’t working perfectly. The only way to really learn how to hold yourself together in the face of adversity is to accumulate a lot of situations where you’ve been kicked in the teeth, either by your competitors or your own mind, and you’ve plowed through it. Once you’ve done this multiple times, you start to believe you can do it whenever you need to.

That doesn’t mean years of experience are going to completely erase all your psychological battles. Even if you’ve been banging away in the game for decades and you’ve had a lot of success, the gremlins will still attack you. I’ve personally heard Olympic champions say this.

Does it still happen to me? Yeah, it does. Can I handle it a lot better now than I could at the three-year mark of my career? Absolutely.

There’s also a lot to be said for always thinking about the next lift only. When you’re a weightlifter, you can get yourself into a lot of trouble if you start thinking about how you’re going to snatch 120 kilos before you’ve done 105, 110, and 115. Ever missed your opener in a meet because you were looking ahead of it to your 3rd attempt? It happens sometimes. The best advice I can give you is to always concentrate on the one that’s immediately in front of you. It takes time to develop this skill, but it pays off once you’ve got it.

We all get scared sometimes. Anybody who says they don’t is a liar. Mike Tyson once said, “I’m scared every time I go in the ring, but it’s how you handle it. What you have to do is plant your feet, bite down on your mouthpiece, and say, ‘Let’s go.’” Wise words, my friends.