Where should the Oakland A’s play Ryon Healy? 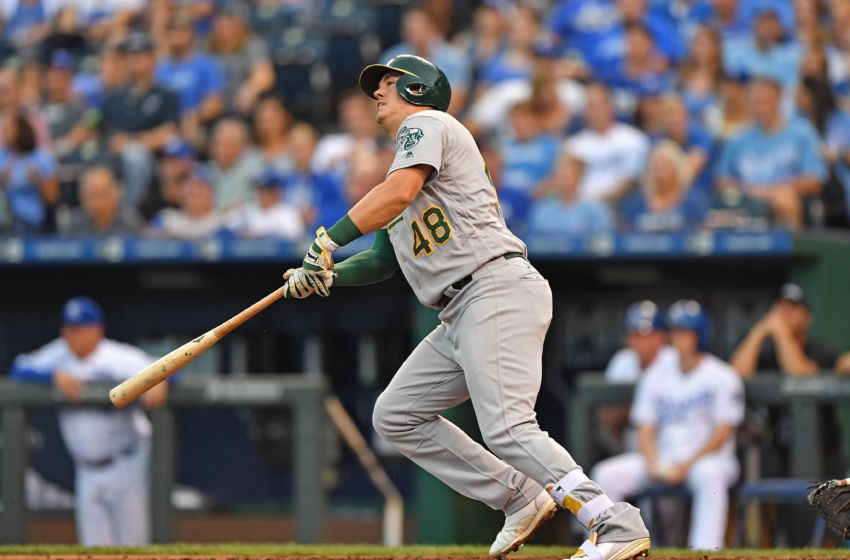 In today’s game against the Washington Nationals, Ryon Healy made world history.

Okay, it’s more of a fun fact than something truly historic, but it’s still pretty cool. Healy got off to a bit of a rough start and he certainly hasn’t hit quite like he did last year, though there are signs of him finding his way. And funny thing, today’s big output came while Healy was playing third.

Healy is raking as a third baseman, not so much elsewhere

Enough beating around the bush with that intro paragraph garbage. The point of this post is to point out that Ryon Healy is mashing as a third baseman, hitting decently when he’s at first, and is struggling mightily at third.

Like most everything in this marathon sport, this is a small sample size, but one that is certainly worth noting.

The DH penalty is a pretty well known thing. Turns out hitting without any chance to stay warm and involved in the game is tough. That’s why the A’s, in spite of having a plethora of hitters who can’t really field, are putting up one of the worst collective seasons by their DH in baseball history. Think of it this way – the A’s would be better from the DH spot if they stuck 2016 Billy Butler in there everyday. Yikes!

So while it’s possible that the difference in Healy’s numbers is just noise, it’s also possible he’s having trouble adjusting to DHing and with playing multiple positions. Seeing that he’s been just as good this year with the bat while playing third as he was last year but significantly worse when DHing or playing first, it’s something I totally buy. Something that still deserves caution, but a very plausible scenario.

The A’s decision to move Healy off third this season was a very planned move. Trevor Plouffe is and was a solid bounceback candidate, but the reasoning for his signing had more to do with personnel than just his on-field ability. He was brought in as a stop gap between today and the day Matt Chapman is ready, which will hopefully sooner than later. Signing Plouffe moved Healy off third, a position that doesn’t look like his long term home in favor of two slots that fit his massive frame a little more sensibly.

With the possibility that Healy actually can’t hack it at either of the non-3B options, what should the A’s do?

-Get rid of Trevor Plouffe and insert Healy at third full time. Plouffe has been fine, probably a smidge underappreciated by the fanbase, but has little functional value for the team. He’s not going to bring back anything via trade and, as is the premise of this whole article, moving Healy off third hasn’t worked.

The problem with that is still looming at AAA, working to decrease his strikeouts. Prospects are never sure things, and Matt Chapman isn’t guaranteed to work out. He is however, almost a guarantee to have some big league time and with a stellar glove, he’ll probably be able to hack it for a good amount of time. So while Healy at third would likely improve his bat, it’s not a long term thing.

-Wait till the deadline when Yonder Alonso is moved. Once that happens, stick Healy at first full time an let things play out.

The causality of Healy being best at third is probably familiarity. It’s not something about the angle of being at third or proximity to the dugout, it’s just what Healy knows best. If he plays full time at first, he could conceivably find that same familiarity that has turned his bat to max capacity at third and translate it to first.

The problem(s)? For one, Alonso is the best first baseman in baseball right now. He’s definitely valuable via trade, though that value isn’t exactly clear. So maybe, just maybe, the A’s can find a way to keep him around. He is so Oakland and it would be so awesome to have such an awesome story at the heart of the next contending A’s team.

Healy’s defense at first leaves something to be desired, too. At third, he’s a chunk below average but not the error machine we’ve seen in a small sample thus far this year. At first, he might be more of a liability. His scooping ability is limited which is unfortunate for someone on the same infield as Marcus Semien.

-Continue as is moving him around the diamond. If playing multiple positions is a skill that requires learning, a bad A’s team is the best chance he has to gain that ability.

He started slowly but he’s picking up as of late, showing that maybe he’a already gaining the ability to move around. That bodes well for the future as the A’s aren’t about to stop utilizing weird lineups that vary by day. Versatility is a must for players in this organization, especially good hitters with limited ability.

The problem? You’re watching it, kind of. Healy is by far his best at third, a position that won’t be open for long. He’s struggled as a DH, been meh at first, and his defense has sagged some (he’ll never be great at any position but the errors are far higher than before). It’s possible he, like so many players before him, can’t handle the constant change he’s seen.

Which option should the A’s choose?

What should the A’s do with Ryon Healy?