Photos: UNIOSUN students embark on protest over the death of an undergraduate 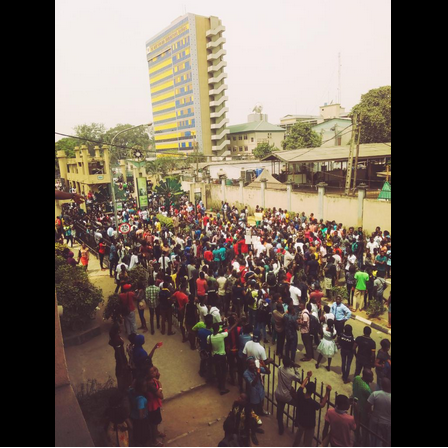 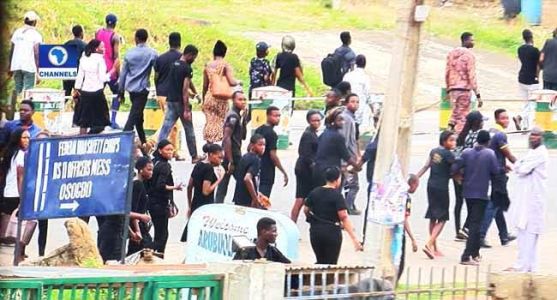 Angry students of the Osun State University have taken over the streets of Osogbo in protest against the alleged ritual killing of an undergraduate.
The students had on Tuesday burnt down a house close to where the remains of Sonibare Timileyin, a 400 level Microbiology student was discovered. 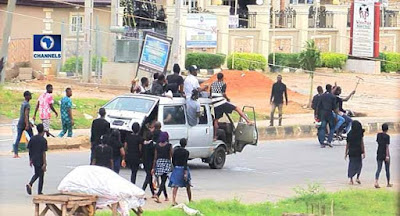 Resuming their demonstration on Wednesday morning, the angry students, dressed in black were said to have marched from their school campus at Oke Baale, to the Palace of the Ataoja of Osogbo, and made a stop at the Olaiya roundabout where a bonfire was made.
The students who reportedly came out in thousands were seen destroying everything they came across, chasing people with sticks and iron materials.
Channels TV reported that commercial and vehicular activities in the town have been grounded and there is a significant amount of tension in the air.
The suspects responsible for the gruesome act, Sakariyau Abdulrafiu (19), Ibrahim Ayuba (24) and Yusuf Aliu (18), have been arrested and they have all confessed to killing Timileyin whose head they were planning to use for money ritual.
Share
Facebook
Twitter
WhatsApp
Pinterest
Linkedin
ReddIt
Email
Print
Tumblr
Telegram
Mix
VK
Digg
LINE
Viber
Naver
Previous articleHow much is too much for a friend’s Wedding? Watch a New Episode of “The Wrap Up with Toolz”
Next articleGovernor Amosun’s daughter and Abike Dabiri’s son to wed in Abeokuta this Saturday..