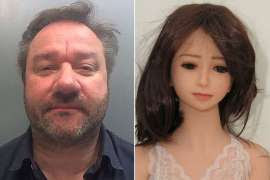 Andrew Dobson, 49, who ordered this disturbing female mannequin -a child-like sex doll to satisfy his sick urges, is believed to be the first person in Britain to be jailed for the crime. Dobson ordered the disturbing mannequin – which is shown wearing see-through lingerie and gloves – from Hong Kong.
The 49-year-old was arrested after border officials became suspicious of the package , so they decided to investigate him, and they found child abuse images on the computer in his house, the  reports.
Judge Nathanial Berkson, who put Dobson in jail, for two years and eight months,said he was disgusted to think that child-like sex dolls exist and can be ordered online and delivered anywhere in the world.

Chester Crown Court heard Border Force officials at East Midlands Airport in Leicestershire became suspicious when they saw and opened the package addressed to Dobson to discover the obscene child-like doll.
Dobson, of Merrivale Road, Wistaston, Cheshire was arrested at his home and following a search child abuse photographs were found on his computer.

In his interview, Dobson admitted buying the doll to use for sex and downloading the sickening images and movies online.

“Knowing child sex-dolls exist and are available for sex offenders to buy is sickening.

“For Dobson to go to great lengths to import one for his own sexual gratification shows the extent of his paraphilic interest in children.

“This conviction is the first of its kind for Cheshire. Cases like these are also very rare across the country.

“However, I want to make it clear that importing a child sex-doll is a criminal offence. Dobson should serve as an example to those who think they can also commit this crime for their own selfish needs.”

Border Force launched an investigation after discovering the parcel – which was labelled as a mannequin – on September 23 2016.
Julian Doughty, senior manager at the Fast Parcel Joint Border Intelligence Unit, said:

“The importation of dolls likes this is a new phenomena and Dobson is one of the first people sentenced in the UK in relation to such an item.

“Working closely with law enforcement partners, Border Force is determined to bring those involved in this type of offence to justice.”