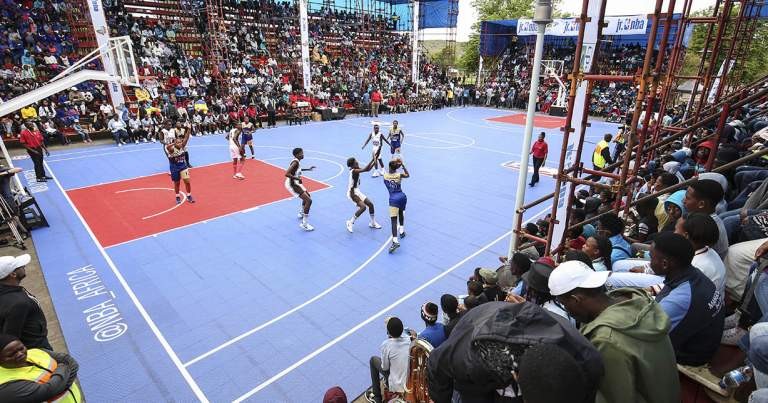 The seventh edition of the Royal Bafokeng Jr. NBA Basketball League Finals took place on Saturday, October 28 and was a resounding success, with some of the most exciting youth basketball on show in Phokeng in the North West province of South Africa.

These finals has been a highlight on the yearly NBA calendar and this particular edition did not disappoint. There were six games on Saturday featuring teams from primary, middle and high school. The winners in the various categories were:

Kgosi Leruo Molotlegi, king of the Bafokeng nation and his mother, queen mother Mmemogolo Semane Molotlegi, were in attendance for the Royal Bafokeng Jr. NBA Finals. Amadou Gallo Fall, NBA vice president and managing director for the NBA in Africa, was very enthusiastic about the 2017 event. “This is for me beyond exciting. It’s the seventh edition of the Royal Bafokeng Jr. NBA Finals. Every year has gotten bigger and bigger with all of the ancillary events that we’ve built around it. In a very rapid fashion Phokeng is becoming that hub for basketball grassroots development across the continent. We witnessed once again people, basketball stakeholders, young entrepreneurs and business people who travel here to Phokeng to be part of this. I think that’s a great testament to the work that’s being done here. Starting with the vision of Kgosi Leruo Molotlegi of the Royal Bafokeng nation and the support of the Queen Mother.”

It was an excellent day’s basketball on an unusually grey day in Phokeng. NBA Legend Jerome ‘Junk Yard Dog’ Williams attended the finals and used all of his electric personality to help create the fun and vibrant atmosphere at the packed venue, with the Dunk Elite Team performing at select entertainment breaks. The highflying dunkers were a showstopper as the crowd rose to their feet with glee every time a gravity-defying dunk was pulled off. This is a program that has brought entertainment, inspiration, education and life skills to the youth of the area and last May the Royal Bafokeng Jr. NBA Program, largest of the NBA’s youth initiatives in Africa, was named the 2017 Development Program of the Year at the annual Sports Industry Awards.

Jerome Williams was thrilled to see the program working for so many young people in the region and felt that it shows the NBA’s dedication to uplifting communities across the globe through sport and education. “The game of basketball does something profound when it can bring communities together. Communities not only across Africa but all across the world. And in these communities we have a lot of the same challenges with our youth [like] keeping them focused, building dedication and determination, getting them educated. And the best thing about the Royal Bafokeng Jr. NBA program is that it mirrors education with athletics. You can’t have athletics without academics and that’s what we try to teach the kids in the US as well.”

Over the past seven years the program has grown to 70 teams from 28 schools with mass participation close to 12,000. It has produced coaches and officials at national tournaments, a head of the North West Basketball Coaching Commission as well as players equipped with skills to be part of the national U16, U20 and senior teams, and the North West provincial senior team. In the same time frame many NBA and WNBA players, greats and coaches have visited the program and provided mentorship to the youth, including Hall of Famers Hakeem Olajuwon (Nigeria) and Dikembe Mutombo (DRC), NBA Legends Cedric Ceballos (US), Sam Perkins (US) and Ronny Turiaf (France), WNBA Legends Ruth Riley (US), Astou Ndiaye (Senegal), Ticha Penicheiro (Portugal) and current NBA players Luol Deng (South Sudan, Los Angeles Lakers), Thabo Sefolosha (Switzerland/South Africa, Utah Jazz), Serge Ibaka (DRC, Toronto Raptors).

This was a weekend filled with activities that also highlighted the academic achievements of learners in the region and served to inspire those who work with the children on and off the court as well as the participants themselves. On Friday, October 27 the third International Sport For Development Forum and Gala Dinner formed part of the celebrations of the seventh Royal Bafokeng Jr. NBA Finals. It was a lively affair attended by queen mother Semane Molotlegi and other dignitaries. The evening featured two panel discussions that dealt with sport for development, focusing on mentorship and the role of sport in transforming the young people in Africa and the impact of the Royal Bafokeng Jr. NBA programme. The evening was capped off by the awarding of the Academic Achievement Awards to learners who had achieved the best results academically at the participating schools in the region. For Gallo Fall, this showed that the NBA’s approach to putting education first is paying dividends: “Our approach in terms of talking about pushing education through basketball and community development has helped us overcome many of the challenges. Because when we first started here we had to literally go to schools and convince the principals to allow the young people to play, because they thought the sport will interfere with their studies. Now they release that it’s to the contrary, because we wanted to make these kids understand that they’ll only be allowed to play if they are in school and if they are doing well in school.”

The seventh edition of the finals was a huge success and can only be bettered by the 2018 event. The investment made by the Royal Bafokeng nation as well as by corporates and community leaders will help this program grow to even further heights, touching more lives in the process.