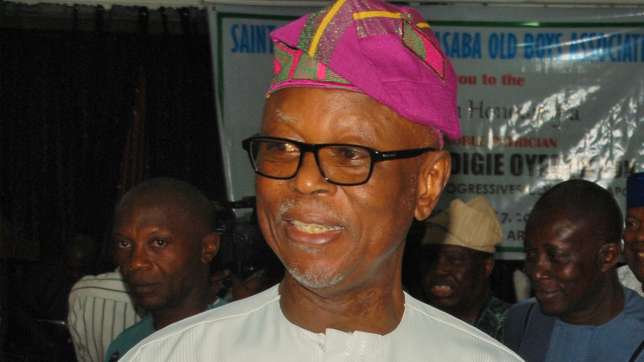 Tinubu had earlier accused the party chairman of sabotaging his reconciliation efforts in the party.

The National Chairman of All Progressives Congress (APC), Mr John Odigie-Oyegun, on Friday met with President Muhammadu Buhari, barely 24 hours after being accused of sabotaging reconciliation efforts in the party.

The News Agency of Nigeria (NAN) reports that the party chairman, who met behind closed door with the president in the State House after the Friday prayers, declined comment on the outcome of the meeting.

NAN reliably gathered that the duo deliberated on the “protest letter’’ submitted to the President by former Lagos governor Ahmed Tinubu, accusing Odigie-Oyegun of frustrating the activities of the party reconciliation committee.

Buhari had, on Feb. 6, appointed Tinubu to lead an APC consultation, reconciliation and confidence building team toward improving cohesion in the party ahead of the general elections in 2019.

Tinubu, in a letter of complaint to Odigie-Oyegun and copied to President Buhari, had accused the party chairman of sabotaging his reconciliation efforts in the party.

The letter, titled: “Actions and conduct weakening the party from within”, was also copied to Vice President Yemi Osinbajo, Senate President Bukola Saraki and House of Representatives Speaker Yakubu Dogara.

Tinubu accused the APC Chairman of compounding the challenge of reconciliation by taking “improper unilateral decisions” on issues affecting national and state chapters.

He also accused Odigie-Oyegun of delaying the release of information critical to the resolution of crises in state chapters.