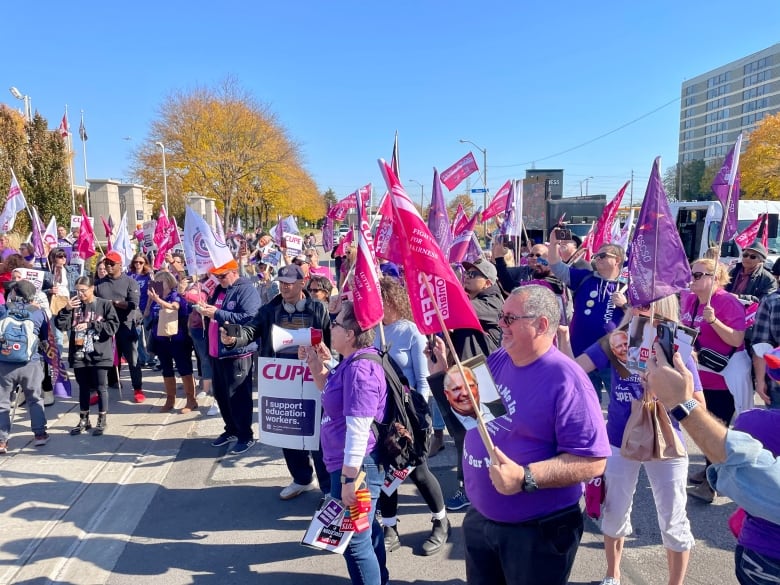 The Ontario government will table legislation Monday to prevent a strike by education workers represented by the Canadian Union of Public Employees (CUPE).

The Ministry of Education says a bill will be introduced at Queen’s Park at around 1 p.m. ET. Education Minister Stephen Lecce is then set to hold a news conference at 2 p.m.

The government and education workers returned to the bargaining table Sunday afternoon but Education Minister Stephen Lecce issued a statement Sunday night saying the union is sticking to its position.

“Because CUPE refuses to withdraw their intent to strike, in order to avoid shutting down classes we will have no other choice but to introduce legislation tomorrow [Monday], which will ensure that students remain in class to catch up on their learning,” Lecce said in the statement.

Kids will be in class. Enough is enough. <a href=”https://t.co/HFF0OZi2sN”>pic.twitter.com/HFF0OZi2sN</a>

Several Ontario school boards have said they will shut down schools if support staff fully withdraw their services.

Mediated talks between the province and union broke down earlier this month, with both sides still far apart on wages.

The gap persisted heading into Sunday’s session as the countdown ticked toward a potential strike.

“No one wants to strike, least of all the lowest-paid education workers who can barely pay our bills,” Laura Walton, president of CUPE’s Ontario School Boards Council of Unions, said in a statement Sunday.

“Still, we need a significant wage increase and we deserve it.”

In an earlier statement, Lecce said he hoped CUPE would budge on demands he has described as unreasonable, but said the government will do what it takes to keep students in school.

“We are at the table with a fair offer that includes a pay raise and maintains the most generous pension and benefit package, but most importantly — it keeps kids in class,” Lecce said in a news release Sunday.

“If CUPE moves ahead with strike action and disruption, we will act to keep students in class so they can continue to catch up.”

CUPE is looking for annual salary increases of 11.7 per cent and the government in response has offered raises of two per cent a year for workers making less than $40,000 and 1.25 per cent for all others.

Education workers have made several other proposals, including overtime at two times the regular pay rate, 30 minutes of paid prep time per day for educational assistants and ECEs, and an increase in benefits and professional development for all workers.

Other than the proposal on wages, the government’s offer seeks to keep all other areas the same as the previous deal except for a cut to sick leave pay.

The government wants to institute what it’s calling a five-day “waiting period” for short-term disability during which a worker would receive 25 per cent of their normal pay and 90 per cent for the rest of the 120 days.

Toronto Catholic schools among boards that would close

The Toronto Catholic District School Board sent a letter Sunday informing parents that its 195 schools, which serve more than 90,000 students, will close if CUPE moves forward with a full strike.

The TCDSB said this is “to ensure the health, welfare, and safety of our students and staff.”

“We are working with our child-care providers on a contingency plan and will communicate more information shortly,” the letter said.

“Parents with school-aged children are encouraged to make alternate arrangements for their families.”

The board said with schools being closed, all permits, night school and Saturday classes, special events and excursions would be cancelled for the duration of the strike.

The Toronto District School Board says it continues to assess the impact a full withdrawal of services will have on its schools.

“With approximately 14,600 TDSB staff members represented by CUPE, maintaining a normal routine will be very difficult and as such, parents/guardians/caregivers and students should be prepared for all possibilities,” the TDSB said in a statement.

“While the TDSB is not directly involved in the provincial negotiations, we remain hopeful that an agreement will be reached without any impacts to classrooms and board operations.”

The Halton District School Board (HDSB) said Sunday its elementary school students would alternate days between in-person and remote learning in the event of a full strike, while high schools would remain open five days a week, including Grade 7 to 12 schools in Aldershot, Burlington Central and Acton District.

The Kawartha Pine Ridge District School Board and the Peterborough Victoria Northumberland and Clarington Catholic School Board together operate over 100 schools attended by roughly 50,000 students in Peterborough, Bowmanville and the surrounding area.

Peterborough Victoria Northumberland and Clarington Catholic said students would transition to remote learning at home, while Kawartha Pine Ridge said it would share details on plans if they receive notice from CUPE about pending strike action.

In 2019, CUPE and the government reached a last-minute deal the day before workers had been set to go on a full strike.