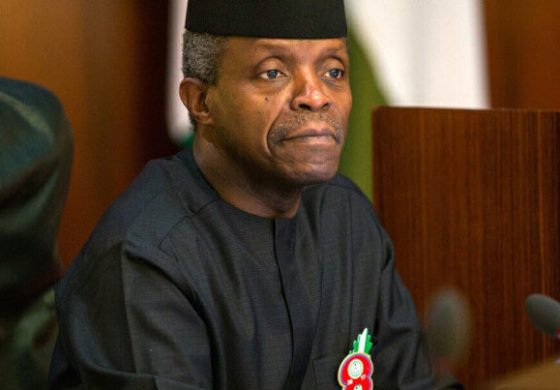 A 12-man Nigerian Bar Association, NBA, team has met with Vice President Yemi Osinbajo following the suspension of the Chief Justice of Nigeria, CJN, Walter Onnoghen, according to The Nation.

The meeting was to reach resolution on the row over the CJN’s suspension.

The meeting which was held at the Presidential Villa was to seek a “soft landing” for the CJN.

Onnoghen is expected to resign in what the newspaper described as a “win-win” situation.

There is also a six-point terms of resolution to be delivered to the suspended CJN through his confidants, relatives and friends, who will be expected to persuade him to quit, according to the newspaper.

The NBA team was led by its National President Paul Usoro (SAN) and two former Presidents and they met with Osinbajo on Sunday night till the wee hours of Monday in a frank session.

Also at the meeting were senior lawyers, including ex-NBA President A, B. Mahmood (SAN), Adegboyega Awomolo (SAN) and others.

A source in NBA, who spoke in confidence, told the newspaper, “I am aware that 12 of our leaders met with the Vice President, who is a senior member of the bar, on how to find a lasting solution to the crisis in the Judiciary. Some of them have briefed us that they went to the Villa to meet the VP.

“The meeting reviewed the issues which led to the suspension of Onnoghen, including the allegations against the CJN, the filing of charges at the Code of Conduct Tribunal, restraining orders by some courts and the ex parte order by the CCT.

“Our leaders restated the fact that they disagreed on the procedure adopted by the government in handling, Onnoghen matter. They virtually repeated the case presented at the CCT since some of them are Onnoghen’s lawyers. But they said the National Judicial Council (NJC) ought to have handled the matter.

“They also faulted the government for allegedly trying to desecrate the Judiciary since Onnoghen symbolises the highest authority in this arm of government.

“At the end of the day, they sought for soft landing for the CJN who has no immunity under the 1999 Constitution.

“They also explained that it was wrong for the Acting CJN, Justice Ibrahim Tanko Muhammad, to have made himself available for inauguration when a ruling of the Court of Appeal was being awaited.”

Responding to a question, the source said: “Well, we were told the VP who was with some unnamed people , accorded the NBA team utmost respect. They said he listened to them and assured them that President Muhammadu Buhari or himself will never do anything to destroy the Judiciary.

“The legal and moral burden on Onnoghen were mutually discussed at the session by both the NBA and the government team. It dawned on everybody from NBA that the minimum the government will accept is the resignation of Onnoghen.

“The NBA however sought a dignified exit for Onnoghen through either resignation or retirement without trial. They proposed that the Acting CJN should also proceed on retirement.”

The VP is said to have assured the NBA team that he will convey their requests to the government.

The newspaper put the terms discussed by NBA at the session as follows:

CJN to resign or retire without coercion;

Govt to withdraw all charges against Onnoghen.

No molestation of CJN under any guise;

NBA team to prevail on relatives, friends to persuade Justice Onnoghen to resign.

Consensus on the need to clean up the Judiciary (long term measure).