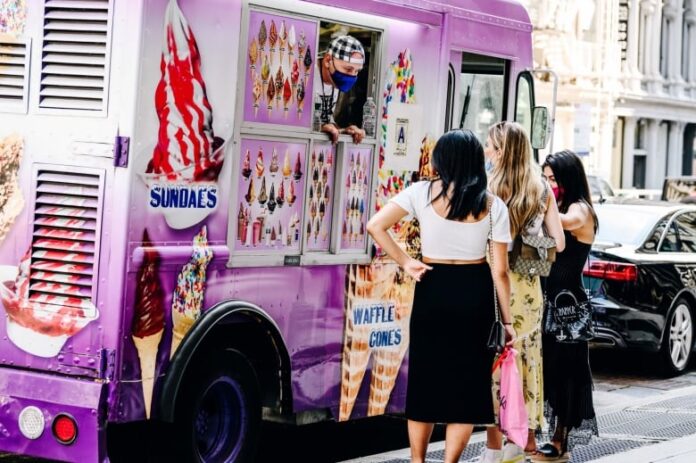 It’s been a scorching summer across much of Canada, but that is cold comfort for ice cream truck operators like Meedo Falou, who says inflation and high fuel costs are melting away his profits.

On a sweltering Thursday morning, the owner of Rainbow Ice Cream in Coquitlam, B.C., pores over a computer spreadsheet and talks to drivers about their routes.

Some flavours are in short supply, and Falou is focused on efficiency for his fleet of 10 trucks.

The problem is not just high gas prices, said Falou.

“Ice cream went up over 60 per cent. We had to jack the price up by a dollar. We couldn’t do more, because of the consumers. We just want them to be able to afford ice cream.”

“Gas prices are up,” said Christensen, speaking from Missouri. “So, a lot of everything — cones, cups, different things — anything that needs to be delivered by truck has gone up in price as well.”

Ice cream prices usually go up three to five per cent a year, Christensen said. But he said this year, prices are up 10 to 15 per cent, although that might not be across the entire menu.

Falou said he has tried to keep prices in check.

Falou is hoping to “make just a little bit” without having to dip into his savings as he did during the past two years of the pandemic.

It’s been a tough year, said Falou, who shuts Rainbow Ice Cream from the end of September to April each year.

“We were hit by bad weather in the spring. It was the wettest weather in June. So that affects our sales big time. And definitely the profit is a lot less than the previous years.”

For example, Madagascar provides about 70 per cent of the world’s vanilla, and when there’s a storm there, or a short flowering season, it affects the global market.

“Which again, you know, affects ice cream,” he said.

The curse of ‘ghost kitchens’

Christensen said old-school ice cream truck vendors are also having to deal with new challenges, such as delivery apps and rivals in so-called “ghost kitchens” who lack a storefront but sell ice cream online.

“The overhead [for a ghost kitchen] is very inexpensive. They’re using social media to promote their ice cream, they’re selling it online and people are coming to pick it up from the kitchen or from a location.”

Falou started out driving an ice cream truck in the 1990s, which he called the “golden days” of the business. He said he made a lot more money then.

To overcome the obstacles of apps, weather, gas prices and inflation, Falou said he’s hoping there will be a comeback in corporate events and other scheduled bookings, which were cut back during the pandemic but are now returning.

“We did suffer,” he said, shaking his head. “We rely a lot on corporate events, birthday parties, parades and weddings and all that. So this year, they’re starting to come back. Some of them, not all of them. So hopefully next year we’ll get them all back.”

But gone are the days when an ice cream truck could drum up business by simply driving around and playing a happy tune, said Christensen.

“Ice cream truck owners need to seek out catering opportunities, food truck events, go to office blocks and hospitals and say, ‘Hey, we can put on a corporate event for you,”‘ he said.

“They need to hustle now a little more than probably they ever had before.”

Christensen recalled his first exposure to the ice cream business, listening as a child for the traditional jingle of the truck in his home country of Australia.

“And little Steve Christensen goes and gets some money from Mum’s dresser and goes out and buys the cone with a Flake in it,” he said with a laugh.

“I would like to think that people still love those experiences. So, the process of supporting your local ice cream van, I think, is very important, because it keeps those memories alive for kids these days.”