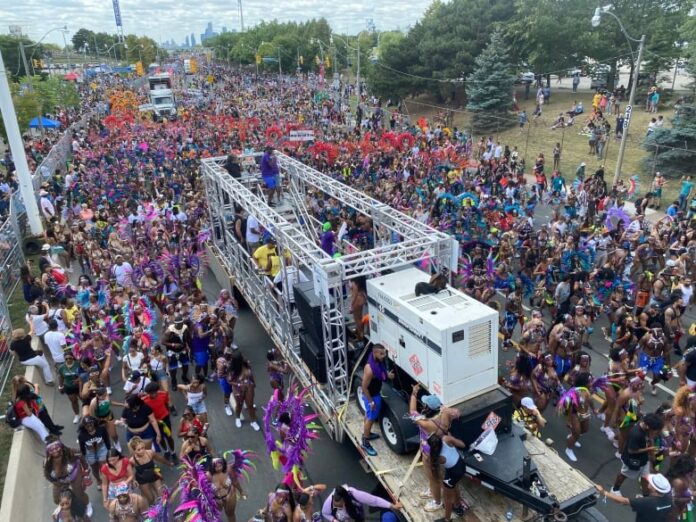 Saturday brought music, dancing and flurry of colour to Lake Shore Avenue and Exhibition Place as the Caribbean Carnival Grand Parade made its triumphant return to Toronto.

The parade is celebrating its 55th anniversary after the pandemic forced cancellations in both 2020 and 2021. According to the event’s website, “the Caribbean tradition of parading through the street was founded in celebration of freedom and emancipation from slavery.”

It’s part of a weekend of festivities that celebrate pan-Caribbean culture, culminating in today’s parade, which is expected to amass hundreds of thousands of spectators.

“I’m feeling pumped, I’m feeling excited,” said Chancois Christopher, one of the attendees. He said he waited a long time for the event and was looking forward to tapping into his culture.

Throughout the weekend, fans also got to see the King and Queen Showcase and the Pan Alive steelpan competition at Lamport Stadium, as well as over a hundred official and unofficial Caribbean events.

“This is freedom, fun, family. This is our foundation,” said Kateri De Souza, a section leader from Toronto Revellers, one of the mas bands taking part in the parade.

“It feels unreal. I have chills”

“Carnival has a really special place in the heart of a lot of Canadians and Torontonians,” said Singh, who said he was excited to “jump up,” a form of dancing that takes place at Carnival.

“We are better off when we come together,” Singh said.

Event organizers say they expect over 10,000 masqueraders to walk and dance their way down the 3-kilometre stretch. It finishes at Exhibition Place, where participants have a chance to dance on a large stage set up at the end of the parade route.

Tiffany James, who is Trinidadian, has always wanted to take part in the parade.

“Carnival is a big part of the culture,” she said.

James and her friend Elizabeth Jones awoke at 5 a.m. to prepare their costumes. Jones said she expects the event to be “pretty wild” after two years of pandemic closures.

Both Jones and James are also part of Toronto Revellers.

The parade will continue until 8 p.m. Saturday evening.

The festival continues all weekend and concludes on August 1, a date known to many as Emancipation Day. It’s celebrated in many Caribbean nations as the day when slavery was abolished in 1834 across the British Commonwealth, including Canada.