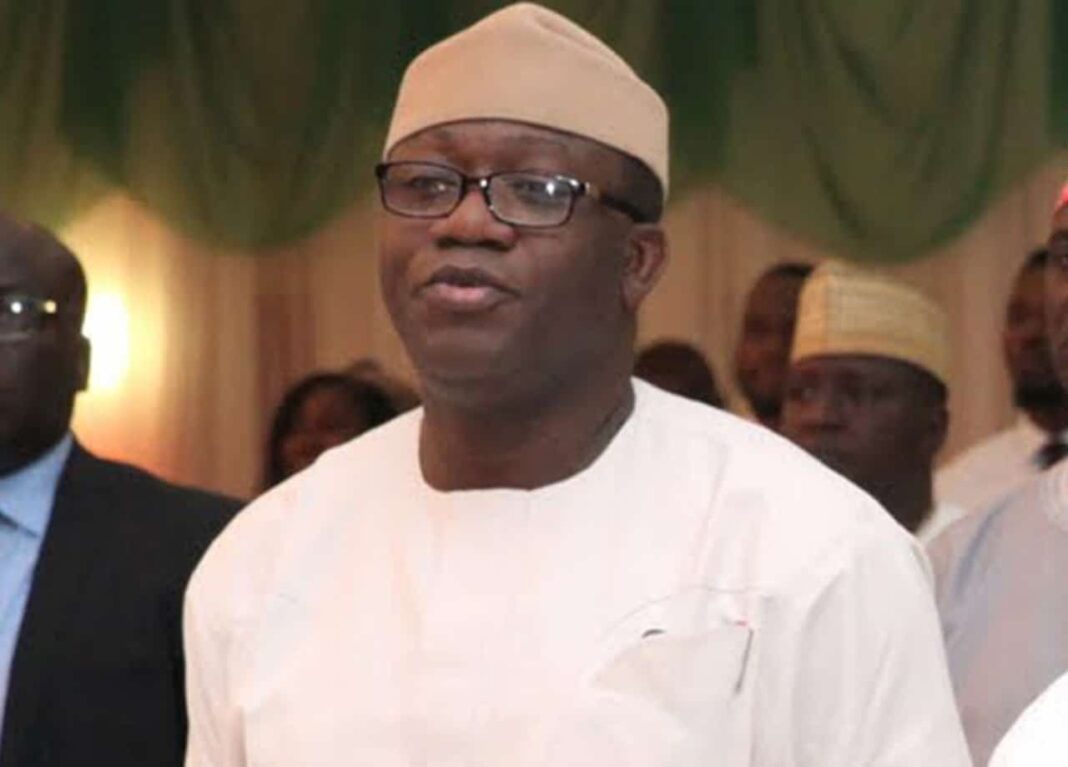 As the controversy over the stool of Olorin of Orin Ekiti in Ido Osi Local Government Area rages, the community has warned Governor Kayode Fayemi against presenting staff of office to the Oba-elect, Prince Olufemi Ajibewa.

The princes and princesses from the two ruling houses: Famokiti and Olubunmo, warned that taking such a step would be tantamount to contempt of court, given the pendency of an interlocutory application challenging the selection process in court.

The position became vacant following the demise of Oba Oluwole Olubunmo, in 2015.

Sequel to the vacancy, Mr. Olufemi Ajibewa, was installed by Fayemi against resistance from the two ruling houses, saying Ajibewa was alien to history and never belonged to royalty.

Speaking with journalists in Ado Ekiti on Monday, Prince Segun Olubunmo, said the ruling houses, in a motion number HAD/277m/22 filed by Princes Gbenga Fajulugbe, Olaniyi Fajulugbe and Segun Olatoye, prayed the court for an interlocutory injunction, restraining Fayemi from installing Ajibewa or parade him as Olorin-elect pending the determination of the substantive.

The motion on Notice filed on the 6th of July, 2020, brought pursuant to order 39 rules 1 and 2 of the State High Court procedure rule, prayed the court to restrain Fayemi and his agents from presenting instruments of office to Ajibewa pending the time the court will adjudicate on the substantive matter.

Apart from the litigation, Olubunmo said the Justice Jide Aladejana Chieftaincy review commission composed by Fayemi himself rejected the application of Ajibewas to be recognized as a ruling house.

He said the government pressing ahead to install someone from that family was “anti-democratic, despotic, anti-cultural and obnoxious”.

“We learned that Olufemi Ajibewa has started lobbying the government to give him the staff of office. Some even said the Oba-elect has been receiving salaries, but that was unfounded.

“We are concerned that the man(Oba-elect) is in the country and he has been going round to lobby powerful people in government to get his staff of office silently without our notice.

“But we are warning that the matter is in court. We have filed an injunction to restrain the government and nobody should preempt the position of the court, it is contemptuous and liable.

“The person who the government wanted to crown is our tenant, not a prince. We have given them a quit notice to leave our land at Orin. If they belong to royalty, would they have been asked to vacate the vicinity of the palace? They are tenants and they will remain tenants.

“No one can force us to accept a person who is not a prince to be installed as a king. Ekiti should not be a precedent where desperation for the installation of Obas is high. You can’t use the Obaship position to please a friend. The interest of the public should supersede.

“We have produced 17 Obas and none of them was from Ajibewa”.

A letter dated July 2, 2020, and addressed to one Samuel Ajibewa by Perebo Pesta Monde and Company Chambers on behalf of the Famokiti and Olubunmo families, directed Ajibewas to vacate the premises of the palace where their family house was located.

“Your continuous claim to the throne of Olorin constitutes a threat to the peaceful coexistence of the people and it is an act of sabotage, hence the rejection of the continuous accommodation of your household at the palace compound. We can no longer tolerate your rebellious action which is threatening the peace and tranquillity of the community”.