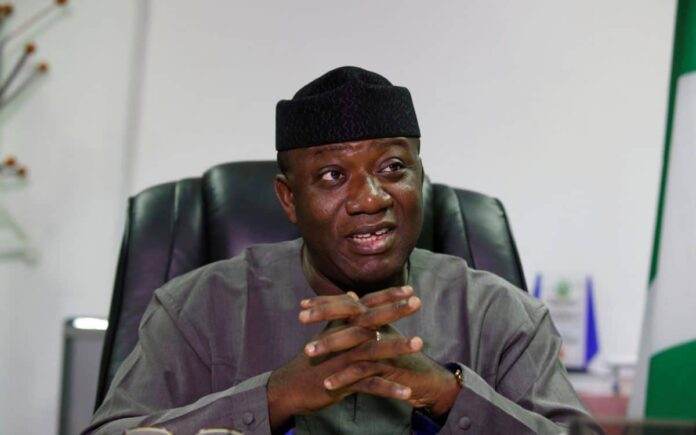 The Governor of Ekiti State, Dr Kayode Fayemi, has assured that all the salary and pension arrears owed workers and pensioners will be paid.

Fayemi urged those nursing the fear that the arrears valued at N57 billion have become a bad debt to bury such erroneous impression.

The Governor upon inauguration promised to defray the arrears before his first one year in office, which the governor regretted he could not fulfil due to paucity of funds.

The Governor spoke in Ado Ekiti on Wednesday while delivering the state -of- the- state address at the Ekiti State House of Assembly to mark the first year of his second tenure.

Fayemi, while assuring the workers that all the arrears will be paid said: “Let me assure our workers that your salary arrears are not bad debt.

” I acknowledge your contributions to the growth of our state and as a government, we are going to ensure that we pay all that were outstanding”, he stated.

He said he will not renege on his promise to begin the implementation of the N30,000 minimum wage commencing from this month.

The Governor added that in his mission to deliver on his promises, that Ekiti now enjoys strong ties with the African Development Bank(AfDB), Islamic Bank, United States of America Development for International Affairs (USAid), World Health Organisation(WHO) , British Department for International Affairs(DFID) and other federal government agencies.

“All these agencies are now working assiduously with us to ensure massive development and turning around of decrepit facilities into models”, he said.

He said the newly revamped Ikun dairy farm will produce 9000 litres of milk daily, while the social security scheme has been relaunched to give stipends to the elderly Ekiti men and women to alleviate poverty in the system.

“As we progress into the future, we are hopeful that we will do better in our second year because we have laid a solid foundation. We are looking forward to a future full of Hope, a future without poverty and a future with progress and prosperity.

” You should expect more developmental projects next year, because the African Development Bank-funded airport, Ado Ekiti Ring road, dualisation of Ado-Akure road , 1000 kilometre rural roads across all the 16 councils and others would have been completed in our second year.

“I appreciate Ekiti people for their support and I solicit more working partnerships with the legislative arm and the judiciary for me to be able to make more positively impactful strides as I proceed into the second year of our administration”, he said.

Fayemi tasked the people on the need to pay their taxes for the state to have enough funds to develop more facilities for the use of the populace.

The Speaker, Hon Funminiyi Afuye stated that Fayemi’s second term was ordained by God to stop what he described as ill-tempered and oppressive administration of the immediate past government.

“From the cross-section of the opinions of the citizens of the state, and many stakeholders home and abroad, we make bold to say that you are delivering on your promises and truly walking the talk.

“No doubt, the unbelievably level of impunity, financial recklessness, and systematic dehumanisation of the psyche of our people, have made the surgical clearing of the Augean stable challenging and tasking.

“I am assuring you that we are together in the journey to restore the values and reigniting the dignity of Ekiti man and woman”.

ABOUT US
Wowplus is a media network. We bring you 24/7 live news & videos, entertainment, lifestyle, celebrities, gossips, music, sports, fashion, education, polities, health and finance
Contact us: [email protected]l.com
FOLLOW US
© Wowplus © 2020 Terms And Conditions Follow us on Google news
We use cookies to ensure that we give you the best experience on our website. If you continue to use this site we will assume that you are happy with it.Close ThisPrivacy policy