Newcastle off the mark with thumping win over struggling Hammers 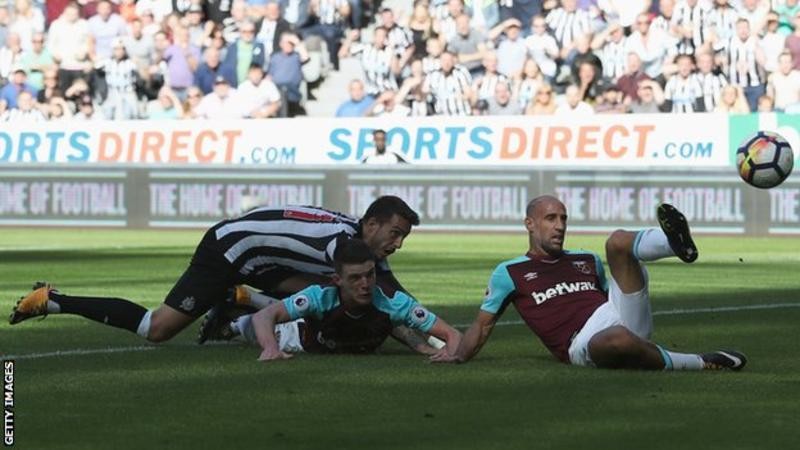 Promoted Newcastle scored their first goals and recorded their first points of the Premier League season with an impressive win over a struggling West Ham side.

Both teams began the new campaign with two defeats, and it was anticipated this contest would be a war of attrition, even at this early stage of the season.

There was little to entertain the crowd until the 36th minute when Joselu poked in after good work from Mikel Merino and Christian Atsu.

Newcastle grew in confidence after the break and it was 2-0 when the brilliant Matt Ritchie delivered a great ball into the area which was nodded in by Ciaran Clark.

And in the closing moments, substitute Aleksandar Mitrovic made sure of the three points when he took the ball around keeper Joe Hart before slotting in.

The Hammers remain rooted to the bottom of the table, having conceded 10 goals in three games.

A brighter future for the Magpies?

Two defeats, injuries to two key defenders and their captain suspended – somebody forgot to put out the welcome mat out for Newcastle on their return to the top flight.

Manager Rafael Benitez, who guided them back to the promised land, suggested this week that he does not plan to stay at the Magpies for too long.

However, in the short time he has been at St James’ Park, he has endeared himself to the fans – so much so that they were chanting his name prior to the goal when the home side were creating very little.

They recognise that Benitez appears to have done the best with what little transfer budget he has. Against West Ham, it was the system he played and the determination his players showed which won the day.

Both Ritchie and Isaac Hayden were exceptional with their dogged work in midfield, especially ex-Bournemouth winger Ritchie.

He forced midfielder Declan Rice into losing possession which resulted in the opener. The loose ball found its way to Merino, who played a beautifully-weighted pass for Atsu. The Ghana winger squared the ball for Joselu, who poked in under pressure.

The Magpies increased their lead when Scot Ritchie’s cross from the right found defender Clark, who nodded in. And then Mitrovic, perhaps lucky not to see a card for a stray arm which caught Manuel Lanzini, added the third after Newcastle had again pinched the ball from West Ham in their final third.

Rice, 18, was taken off at half-time, seemingly because his confidence was shattered after the mistake that led to Newcastle’s opener.

He was consoled by Hart straight after the goal, but the teenager knew the significance of his mistake in a side that was also short of confidence.

Their best chances came after the break when Rob Elliot blocked Aaron Cresswell’s effort and took the sting out of Javier Hernandez’s follow-up before Clark cleared the ball off the line.

The international break will give Hammers boss Slaven Bilic time to work out why it is not clicking for his side.

‘It was a game of mistakes’ – reaction

Newcastle manager Rafael Benitez: “When you are losing it is difficult, when you are winning everyone is happy.

“We won with everyone trying so hard. The fans were crucial last year and they have to be crucial this year – they are trying to help. I think I have some friends in the stands.

“I said before that Joselu needed to be fit. He did well. It was a great effort. Matt Ritchie is an important player – the way he works is an example for the others.

“We will try and bring in players that will give us something different. We know these players.”

West Ham boss Slaven Bilic: “We made a mistake that led to their first goal and it gave them a boost.

“We came back in the second half and we better in the first 10 minutes, but it’s a game of mistakes. We didn’t play good. They were the better side. The goals helped them. They deserved those goals because they pressured high up the pitch.

“We have to admit they were better in everything, especially in determination and wanting to win second balls and making a transition when doing that. We didn’t deserve anything. We had a midweek game but that had nothing to do with today’s performance.

“We are trying to be active [in the transfer market] still but I was happy with the team, it was just the performance that was not good. We can talk about the away games but I expected a lot, lot more.”

Hart not keeping it clean – the stats

Newcastle are at Swansea on Sunday, 10 September (16:00 BST) after the resumption and the Hammers host Huddersfield on Monday, 11 September (20:00).