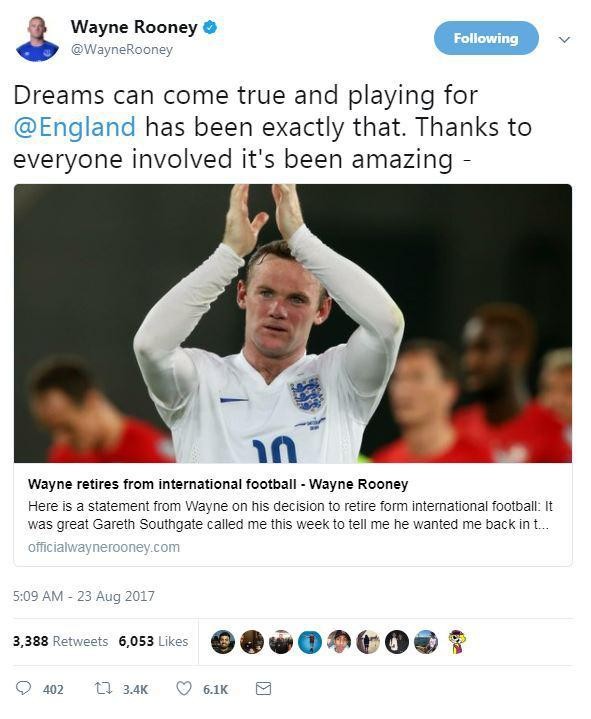 Former England boss Steve McClaren says he would not be surprised if Wayne Rooney plays for the national team at the World Cup in Russia next summer.

Everton striker Rooney, 31, announced his international retirement this week, despite national boss Gareth Southgate asking him to be in his latest squad.

Southgate has since said the door remains open for the country’s all-time leading goalscorer to return.

“I think we should watch this space regarding his England future.

“If he gets his form back at Everton, scoring regularly, then selection might come again. It would not surprise me if he gets the call before the next World Cup and decides to come back.

“In this game you have ups and downs, but now he has a new start at Everton and as far as I’m concerned he still has a lot to contribute for England.”

Rooney has scored 53 goals in 119 appearances for England.

He returned to hometown club Everton this summer following 13 years at Manchester United, who he joined from the Toffees for £27m in August 2004, scoring a club record 253 goals in 559 matches.

He has made a positive start to life back on Merseyside, scoring twice in two Premier League games – the second, at Manchester City, his 200th top-flight goal.

Rooney made his England debut in February 2003, in a 3-1 defeat by Australia at Upton Park, and his last international appearance was as captain in last November’s 3-0 victory over Scotland at Wembley.

He was overlooked by Southgate for matches against Scotland and France in June but offered a recall for next month’s World Cup qualifiers against Malta and Slovakia.

“In 10 years we’ll look back on Wayne Rooney for England as we do with Jimmy Greaves and Bobby Charlton – as a legend,” added McClaren, who managed England from 2006 to 2007. “We’ll see that what he’s achieved has been remarkable.”