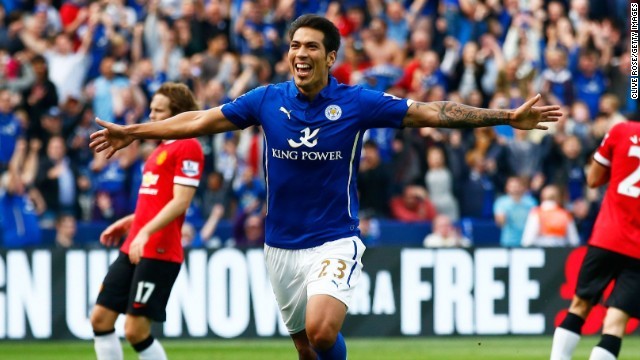 Substitutes Marcus Rashford and Marouane Fellaini both scored as Manchester United overcame a resolute Leicester to strengthen their position at the top of the Premier League.

Jose Mourinho’s side had applied incessant pressure on the Foxes from kick-off, and Romelu Lukaku missed a second-half penalty prior to the goals, as they found it difficult to break the steadfast backline.

I think we frustrated them for large parts of the game

They finally breached the last line of defence when Rashford converted Henrikh Mkhitaryan’s corner three minutes after coming on.

And then midfielder Fellaini stuck out his knee to divert fellow substitute Jesse Lingard’s drive past Kasper Schmeichel.

United are the only side to have won all three of their opening league games this season and have yet to concede a goal.

Change in tactics works for Mourinho

United peppered the opposition area with crosses in the first half, but aside from a Paul Pogba strike that drifted narrowly wide, the threat from the wings was comfortably dealt with by the Foxes’ defensive giants Wes Morgan and Harry Maguire.

There was a shift in manager Mourinho’s thinking in the second half as his side began to breach the 18-yard area with shorter balls from a more central position.

That probing should have resulted in the opening goal. Leicester were once again on the back foot in their area before Anthony Martial struck a shot that came off Danny Simpson’s arm. Referee Michael Oliver declared it to be deliberate handball.

Lukaku stepped up to the spot, but his hopes of a fourth league goal this season were thwarted by Schmeichel’s dive to the right.

Leicester continued to come under pressure and eventually succumbed when Rashford’s instinctive shot flew past the Dane in goal in the 70th minute.

Holes now began to appear in Leicester’s previously watertight defence as they went looking for an equaliser.

United capitalised again as substitute Lingard’s low drive was diverted into the net by Fellaini, although replays suggested the Belgian was fractionally offside.

Leicester manager Craig Shakespeare should not be too despondent.

His side’s valiant defensive display was reminiscent of those during the Premier League-winning campaign two seasons ago. It was at the other end that his men disappointed.

At Old Trafford, both Jamie Vardy – the Foxes’ star striker of 2015-16 – and Shinji Okazaki were ineffective, while Riyad Mahrez teased the United defence without an end product.

Vardy was withdrawn with 15 minutes left, to be replaced by Islam Slimani.

The closest Leicester came to scoring was when substitute Andy King forced a brilliant point-blank save from David de Gea in the final few seconds of the match.

‘Nine points after three matches is nothing different’ – reaction

Manchester United manager Jose Mourinho on winning the first three matches: “We can look into perspective. Last season we won against Leicester at home so that doesn’t make a difference, but we had too many draws at home last season.

“The difference is the quality of our football, we’re playing better today. If we hadn’t won this match I wouldn’t have anyone to blame.

The team is playing very well and I’m very confident. We are comfortable on the ball and dangerous on the counter-attack. But nine points after three matches is nothing different for us, because we did that last season.

Leicester boss Craig Shakespeare: “I think we frustrated them for large parts of the game. When you come to Old Trafford in the form they are in, they will have big moments. We had our moments too, but could not see the game through.

“Set-pieces are our Achilles heel at the moment. We need to organise better.

“It was a harsh penalty, but a great save form Schmeichel. To go 1-0 down, it knocked a bit of spirit from us. I’m disappointed in the overall result, but we were nice and solid for large parts.

“You have to be disciplined; you know what the opposition’s strengths are. We tried to attack in the second half.

“Maguire was carrying a knock but was desperate to play – he was solid.”

United are at Stoke on Saturday, 9 September (17:30 BST) when the Premier League resumes after the international break. Leicester are at home to Chelsea on the same day (15:00 BST).