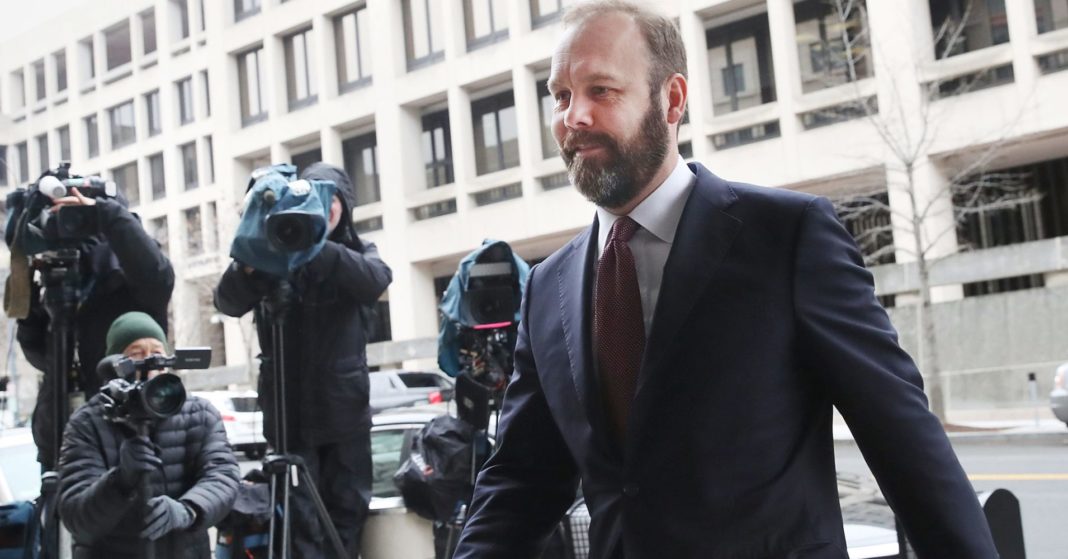 Special counsel Robert Mueller and a lawyer for Rick Gates, the Trump campaign official convicted of lying to federal investigators, on Tuesday asked for a further postponement of Gates’s sentencing, citing his continuing cooperation in “several ongoing investigations.”

Mueller and Gates’s lawyer, in a filing in federal court in Washington, D.C., asked the judge in the case to allow them to next update the judge about the status of Gates’s case by no later than March 15.

The request for a delay came a day after multiple media reports about lavish spending by President Donald Trump’s inaugural committee. The $107 million in spending by that committee, on which Gates served as deputy chairman, already was the subject of a federal criminal investigation.

“To date, the status of this matter has not changed substantially since the November [status] report, as defendant Gates continues to cooperate with respect to several ongoing investigations, and accordingly the parties do not believe it is appropriate to commence the sentencing process at this time,” Mueller and Gates’ lawyer Thomas Green wrote in their new status report Tuesday.

Gates is one of several people connected to Trump who has pleaded guilty in cases lodged by Mueller. He has agreed to cooperate with the special counsel’s probe of Russian interference in the 2016 presidential election and possible collusion by Trump campaign officials.

Trump has denied any wrongoing by himself or by his campaign, and has called Mueller’s probe a “witch hunt.”

Gates was a longtime business associate of former Trump campaign chief Paul Manafort, and testified against him last summer at Manafort’s first federal criminal trial in Virginia. That trial ended in Manafort’s conviction on a variety of crimes, which were unrelated to his work on the Trump campaign.

Gates had been charged with Manafort in a case related to their consulting work in Ukraine for pro-Russia politicians. Gates pleaded guilty in early 2018 to lying to Mueller’s investigators.

Manafort himself pleaded guilty to multiple crimes on the eve of his scheduled second trial in federal court in Washington. Like Gates, he agreed to cooperate with the special counsel’s probe, in a bid for leniency when he is sentenced.

Mueller in late 2018 accused Manafort of breaking his plea deal by lying to the special counsel’s team during debriefing sessions conducted after his guilty plea.

Manafort’s own lawyers have said in a court filing last week that Mueller accused the Manafort of lying about sharing Trump campaign polling data with an alleged Russian spy, and about his conversations with that accused agent, Konstantin Kilimnik, regarding a possible peace plan for Ukraine.

Manafort has yet to be sentenced.